Following on from his pioneering work on the use of a parasitic nematode to control the Sirex wasp, estimated to save the Australian pine forest industry $1-4 billion per 30-year forest rotation, Robin Bedding extended this approach to include a very different group of nematodes (called entomopathogenic nematodes) to attack a variety of other insect pests. These pests included: the blackcurrant borer moth; the black vine weevil in ornamentals; banana weevils; scarabs that feed on the roots of a wide range of plants including turf; and fungus gnats that damage seedlings, hydroponically grown flowers and mushrooms.

Of major significance has been his collaboration with China to control: the carpenter worm which was killing 5% of the shade trees in northern China; and the Apple borer moth, the worst pest of China’s one million hectares of apples. This has resulted in the establishment of pilot factories in Guangdong and Beijing.

Entomopathogenic nematodes do not kill the insect per se, rather they act like a Trojan Horse, releasing a lethal bacterial weapon once they get into the insect’s blood. It is this concealed, highly specialised symbiotic bacterium which multiplies and rapidly kills the insect pest.

Robin Bedding’s work has included the development of specialised technologies to produce hundreds of billions of various kinds of nematodes for use in Australia and overseas. This work helped to establish a new export industry of nematode products for the control of insect pests.

Keen to follow up on his success with the nematode Beddingia siricidicola and the control of the sirex wasp, Robin Bedding began to explore the possibility of using a very different group of nematodes for the control of a wide range of insect pests. These nematodes are called ‘entomopathogenic nematodes’ (nematodes that penetrate and rapidly kill insects with the help of a special symbiotic bacterium).

How do entomopathogenic nematodes work ?

Most entomopathogenic nematodes (ENs) belong to one of two genera, Steinernema of which there are some 40 species described or Heterorhabditis with nine species. The infective juvenile EN is more or less microscopic, anything from 0.5 mm to 1.5 mm long depending on species. It has a closed mouth and anus and cannot feed until it finds an insect. Usually it is found in soil, is activated by insect movement and then follows a gradient of carbon dioxide to find the insect. Now it needs to get into the insect’s blood cavity in order to kill it. ENs enter through the insect’s natural body openings, the mouth, anus or respiratory inlets (spiracles) and then penetrate into the blood cavity from the gut or breeding tubes; Heterorhabditis species can also penetrate through chinks in the insect’s armour (the interskeletal membranes) by scratching away at these with a special tooth.

Once in the insect’s blood the EN infective juvenile releases a highly specialised symbiotic bacterium found only in ENs. These symbiotic bacteria multiply and rapidly kill the insect within a day or so. The bacteria then convert the insect into suitable food for the nematodes and produce a range of antibiotics and anti-feedants that preserve the dead insect while the nematodes feed and breed up within it. After about 10 days a medium-sized scarab cadaver may produce up to 100 000 or more infective juvenile ENs that are released into the soil and seek out new insect pest hosts. Unfortunately there are many fungi and other organisms that can attack the infective juveniles before they are able to enter an insect pest. 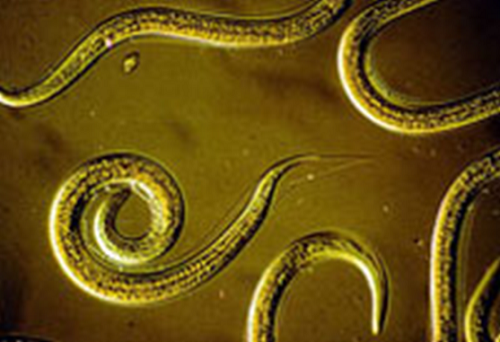 A group of entomopathogenic nematodes (Steinernema carpocapsae) used for pest control against a wide range of insect pests including caterpillars of turf, shade and apple trees in China, and termites. [Photo: CSIRO Entomology]

Controlling a range of targets

Over a period of more than two decades Bedding and his team developed the technology for producing, processing and storing a range of these entomopathogenic nematodes (ENs) for control of the following pests: 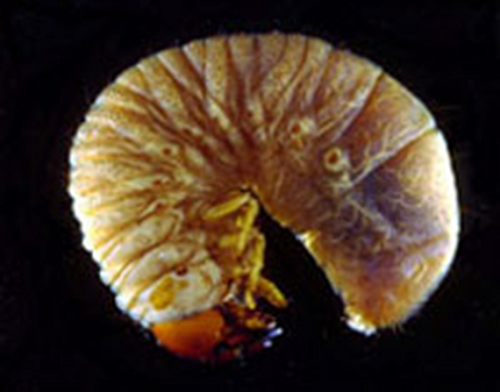 It is far too expensive to rear ENs inside insects at least in industrialised countries. CSIRO pioneered the use of the ENs own symbiotic bacteria to convert various crude media into ideal food for culturing ENs aseptically on three-dimensional carriers. Essentially crumbed waste upholstery foam is used to provide a large surface area on which a thin layer of media is distributed. This is sterilised by autoclaving for an hour or more and then aseptically inoculated with the symbiotic bacteria of the nematode to be cultured. Aseptic nematode inoculum is added after a few days of incubation of the bacteria and two to three weeks later nematodes can be harvested and processed using specialised apparatus. CSIRO has patented culture chambers that are self aerating while maintaining uncontaminated nematode/bacterial growth throughout the culture period and has used these to produce many hundreds of billions of ENs for trials and commercial use.

It takes about 2 000 million ENs to treat one hectare where the insect pest is reasonably susceptible. Because ENs are living organisms requiring continual oxygenation, it is impractical to supply them to growers in a water suspension that would have to be kept continually aerated and would even then only last for a few days. Temporary refrigerated storage can be achieved by adding cream of nematodes to crumbed foam in plastic bags but the end-user has to extract these from the foam. CSIRO has patented a number of better ways of formulating ENs. 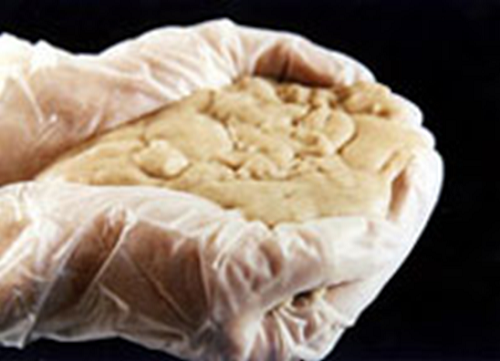 Nematodes in their mass produced form before drying and packaging. There are about 2 000 million nematodes here, enough to treat one hectare of turf. [Photo: CSIRO Entomology]

In 1999, Ecogrow Australia Pty Ltd was established to commercialise CSIRO research on Entomopathogenic Nematodes (ENs) as well as Beddingia siricidicola for the control of sirex. The business is expected to result in global sales worth in excess of $100 million a year securing CSIRO significant royalties and research funding. Joe Blaney, founder and CEO of Ecogrow, said:

I always planned to put the CSIRO nematode biopesticide technology on the world market. Ecogrow’s product is unique and protected by patents licensed from CSIRO. This gives us a significant competitive advantage over our international competitors. Coupled with exchange rate advantages, this puts Ecogrow in a great position for our export business in the future.

The local and overseas market for this technique of insect control is expected to grow. Bedding and his team have ensured that Australia is at the forefront in the development of environmentally sound and cheap alternatives to costly and increasingly ineffective insecticides. As Robin Bedding said at the presentation of one of the inaugural ACT Research and Development Grant Scheme Awards to Ecogrow in September 2001:

CSIRO technology is helping an Australian company emerge as a major player in the world turf management market.

CSIRO now has the largest collection of nematodes stored either in liquid nitrogen or as cultures. Already, hundreds of billions of these nematodes have been produced for the Australian and overseas market. These products are applied as biopesticides and can be used on food crops as they do not persist for long periods in the environment. 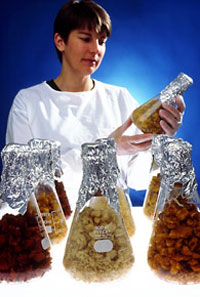 One of the Australian Centre for International Agricultural Research’s most successful projects, was the application of CSIRO’s biopesticide technologies enabling the control of the fruit-boring moth Carposina, the major pest of a million hectares of apples in China, worth $1.7 billion a year, and also for the control of the carpenter worm that every year kills 5 percent of shade trees in northern China. Robin Bedding was the leader of this project which involved extensive collaboration with two major research institutes in China.

Robin Bedding has received many honours for his work including election as a Fellow of the Australian Academy of Science in 1997 and a Fellow of the Society of Nematologists in 1998.

He was awarded a Centenary Medal in 2001, a Sir Ian McLennan Achievement for Industry Award in 1997, a Clunies Ross National Science and Technology Award in 1995 and a CSIRO Medal for research Achievement in 1993.