One of CSIRO’s most successful technology-based R&D programs was its solar energy utilisation work, initiated by Morse in 1953 at its Central Experimental Workshops at Maribyrnong, Victoria. This laboratory developed into the Division of Mechanical Engineering at Highett, where an enthusiastic and competent team of engineers and scientists succeeded in laying the foundations for, and fostering the development of, a new industry to manufacture solar water heaters. In 1987, the installed value of its products exceeded $50 million per annum with the industry exporting both hardware and technology to a number of countries.

In addition to domestic and commercial hot water, other applications include swimming pool heating and industrial process heating.

The earliest use of renewable energy on a significant scale was the introduction of windmills in the latter half of the 19th century for pumping water from bores and streams. For many decades they were an important power source in an energy starved semi-arid economy. Firewood, which can be regarded as stored solar energy, was the main source of energy for the early settlers. It was used for heating, cooking and even steam engines before coal was available, but energy usage was low. As living standards rose, so did energy consumption per head, and coal and oil became the main sources of primary energy. By the middle of the 20th century it became clear that the availability of the liquid fossil fuels, on which society had become dependent, was limited. It was important that alternatives be found and energy conservation encouraged.

There was a growing belief by energy technologists throughout the world that reserves of fossil fuel, especially oil, were being depleted so rapidly that the search for renewable sources of energy had become urgent and attention was focused on solar energy to meet this perceived threat. Very little R&D on solar energy utilisation had been undertaken prior to 1945, but the late 1950s saw increasing interest in academic institutions in USA and Israel and a few years later in Australia.

The first report of an Australian domestic solar water heater was an article by Bates in the Cane Growers Quarterly Bulletin of July 1941. It was a description of a system having 20 square feet (1.9 m2) collector area and 40 gallons (180 litres) storage (no auxiliary heating), built and installed by CSIR’s Roger Morse at Meringa Station near Cairns, North Queensland. Bates estimated that it would provide hot water for the household for 300 days a year in the North Queensland climate. By modern standards it was primitive and although it created considerable interest there is no record of the number of similar units that were built.

Research intensifies in the 1950s

In 1953 Australia had no significant indigenous oil or natural gas and it was considered unlikely that commercial quantities would be discovered. CSIRO’s Central Experimental Workshops was changing its role from a service group to engineering research and development in areas which were considered to be of strategic significance to the country by virtue of its climate, its natural resources and its needs.

In 1953 solar energy was identified as one of these and by 1954 a prototype solar water heater had been built and tested and a report on its design and construction published. At the 1955 Phoenix Symposium an account of this work was presented by Roger Morse in a paper which was one of the first to set out the principles on which the design of solar water heaters could be based. It drew on what had previously been published, particularly Hout C Hottel’s work on flat plate collectors at Massachussets Institute of Technology (MIT) in USA.

Since there was considerable industrial and popular interest in this work, it was expanded and the group became the CSIRO Engineering Section, later the Division of Mechanical Engineering. It provided the R&D base for the new solar water heater industry in Australia, which now exports both products and technology to a number of countries.

The creation of the Australian solar heating industry

During the period 1954-64, CSIRO published a series of reports which gave details of the design of collectors and systems and the results of field tests. They were widely distributed, creating great public and professional interest and led to frequent discussions between manufacturers and researchers, which were effective in transferring the technology around Australia.

By this time solar R&D programs had been set up in the Universities of Queensland, New South Wales and the James Cook University of North Queensland. During the next decade most of the Australian universities and the major institutes of technology had become interested in solar energy utilisation.

The 1970 International Solar Energy Society Conference, was held in Melbourne from the 2nd to the 6th March, for the first time outside the United States. It attracted world-wide interest and was supported by the Australian and Victorian Governments. It was also recognition of the work of CSIRO’s Division of Mechanical Engineering which was the largest group in Australia engaged in solar energy R&D at that time. It is interesting to note that even by 1974 there were no commercialised packaged solar water heating systems on the US market, whereas in Australia there were several brands being marketed by local manufacturers. 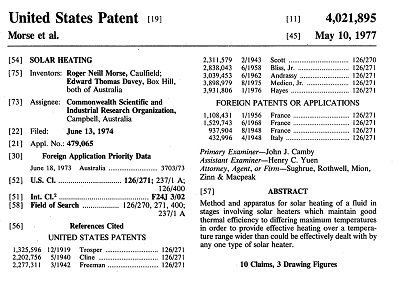 The R&D programs at that time were mostly confined to solar heat generating systems and one measure of their success is the number of patents of Australian origin which emerged. The Australian Patent Office reports that for the period 1920-81, applications, by country of origin, in the solar thermal energy field were Australia 201, USA 199 and all other countries 319. Of the 201 Australian applications 17 were lodged by CSIRO and 14 by universities or State instrumentalities, but the overwhelming majority were by companies or individuals. Although initially CSIRO was not patenting its developments in solar heating technology, it was widely distributing its publications and its researchers were closely in touch with their industrial colleagues. The Australian impact on the world’s technology in this field was clearly significant.

The three drawings in Morse’s 1977 U.S. Patent Number 4,021,895. Fig 1 is a diagrammatic layout of one installation that comprises four independent solar heaters denoted as 1, 2, 3, 4 each consisting of a bank of individual collector units. These heaters are connected to a columnar storage tank five at different levels to give four temperature zones within the tank. The solar collector units of the four heaters are of different types designed for the four different temperature operations: high, medium-high, medium and low. Fig 2 shows a cross-section of high, medium and low temperature collectors included in the installation. Fig 3 is a diagrammatic layout of an alternative system.

The Australian solar water heating industry has been a remarkable success story. By 1973 about 20 000 sq metre of collectors had been installed throughout the country, but from that time annual factory production has increased from 8 770 sq m in 1973-74 to 200 000 sq m in 1981-82 an average increase of 50 per cent each year for the eight years. It has been estimated that by 1985 there were about 1.12 million sq m of solar collectors operating in Australia, generating annually some 2.8 PJ/y (1015 joules). While this is only 0.3 per cent of end use energy for heating purposes, it is equivalent to five per cent of annual hydro-electric power generation.

The major manufacturers in Australia, Solahart, Beasley, Rheem and Edwards Hot Water Systems, now undertake their own product development and their flat plate collectors, water heaters, and commercial and industrial installations are equal or superior to the products of their international competitors.

The practical development of selective surface coatings by Beasley Industries in conjunction with CSIRO gave Australian manufactures a technological advantage over those overseas, enabling them to export systems and components and to set up licence agreements in a number of countries including India, Japan, Kenya and New Zealand.

SW Hart and Co Ltd which trades as Solarhart, started making solar water heaters in 1953 and is now Australia’s largest manufacturer of these systems. It has exported to 72 countries and has on-going programs in 40. Over the period 1974-85, the company exported 50 000 units valued at $70 million. 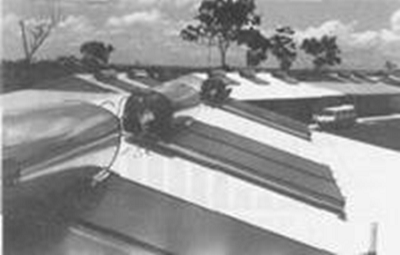 Solarhart pioneered the close coupled mains pressure unit incorporating themosiphon flow between the collectors and the storage cylinder. It is fitted with an electric booster, thermostat and over temperature and pressure relief valve. It could be very easily mounted on the roof of a building and the company built up an efficient marketing and servicing organisation based on one or two models. This combination, supported by good R&D and manufacturing divisions, led to rapid growth, to the point where Solarhart must be considered one of the world’s most successful solar water heater manufacturers.

Large commercial systems with pumped circulation and automatic controls have been installed in hotels and motels, schools, hospitals and public buildings. One of the more spectacular is at the Yulara tourist resort at Ayers Rock. Built in 1984, it has 3 855 sq m of roof mounted collectors which supply some 70 per cent of the resort’s hot water and heating needs. They were made by Beasleys, who have also exported collectors for a number of large systems, including the United Nations Block at Nairobi, where a 210 sq m array supplies two 4 500 litre storage tanks. 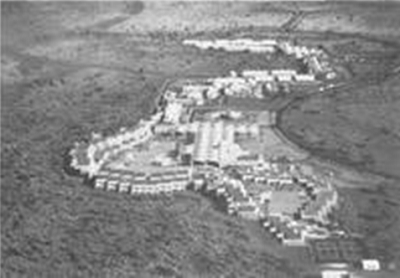 The potential for solar energy in industrial process heating, particularly for food processing, was recognised long ago, but it was not until 1976 that CSIRO, in a joint venture with Diverse Industries, installed the first system at Queanbeyan for can warming in a Coca Cola bottling plant. It was a demonstration plant and was instrumented to measure cumulative radiation on the 77 sq m array (subsequently increased to 94 sq m), heat input from the array to the 20 cubic metre thermal store, heat from the oil fired hot water boiler and heat to the process. Thermal cost effectiveness is 4.6 Annual MJ/$cost. The instrumentation was simple, reliable and effective, and has been used on later systems to measure cost effectiveness. The system was still operating in 1988 but its output was used for a different purpose. 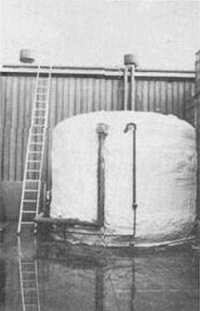 Other installations in the CSIRO program to demonstrate solar industrial applications were:

An important factor in the transfer of R&D from CSIRO and the Australian universities to industry, has been the establishment of the National Energy Research Development and Demonstration Council in the late 1970s. NERDDC funds have been deliberately channelled to co-operative developments between Universities and industry and to individual companies. This has helped to promote a healthy level of R&D among manufacturers in Australia.

In recognition of his contribution to the promotion of solar energy utilisation, he was made an Officer of the Order of Australia in 1979 and was awarded the Peter Nicol Russell Memorial Medal in 1980, the highest award of the Institution of Engineers, Australia.