In the mid-1940s very little was known about radio waves from space. From 1946 to 1954 scientists and engineers from the CSIRO Division of Radiophysics built a range of radio telescopes at Dover Heights and developed new ways of collecting radio data. Many major discoveries were made at Dover Heights which established Australia as a world leader in the emerging new science of radio astronomy. The staff involved at Dover Heights included Gordon Stanley, John Bolton, Bruce Slee, Kevin Westfold, Jack Piddington and Dick McGee. The group was led by Joe Pawsey, with Taffy Bowen the Chief of the Division.

The Dover Heights discoveries revolutionised space exploration and heralded a new era in astronomy. By looking at the radio waves emitted from objects in space, scientists can probe deeper and reveal the very distant universe. Since the first discoveries at Dover Heights, radio waves have been used to explore the entire cosmos, from the Sun and planets in our solar system, to stars and gas in our Galaxy, and beyond to other galaxies and the most distant reaches of the Universe.

Rodney Reserve, on the cliff tops at Dover Heights in the eastern suburbs of Sydney, was one of the most remarkable and important astronomical sites in New South Wales. 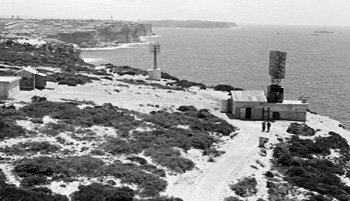 This photograph, taken in 1943, shows a panoramic view of the cliff tops at Dover Heights, looking north towards the Sydney Heads. On the right of the image is the radar array used during WWII. This was installed on the top of a block house and operated at a frequency of 200 MHz.

From 1946 to 1954 scientists and engineers from the CSIRO Division of Radiophysics built a range of radio telescopes at Dover Heights, developed new ways of collecting radio data and established Australia as a world leader in the emerging new science of radio astronomy.

As Gordon Stanley, a member of the team that discovered radio waves from extragalactic objects, recalled:

It is difficult to comprehend the emotional impact of an observation which took us from a partially explicable solar system and galactic radio emission phenomena into the realms of phenomena with inexplicably high energy outputs, no matter where they were located. Neither of us ever approached such an emotional high again in our work.

Other scientists and engineers who worked at Dover Heights included John Bolton, Bruce Slee, Kevin Westfold and Dick McGee. They belonged to the radio astronomy group at the CSIRO Division of Radiophysics. Other people in this group worked at a number of field stations around New South Wales. The group was led by Joe Pawsey, while Taffy Bowen was the Chief of the Division. 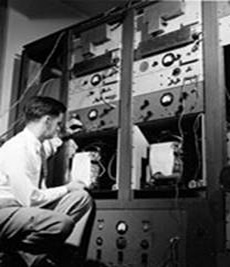 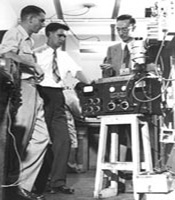 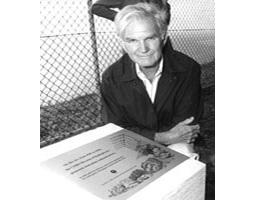 Many astronomical observations at Dover Heights were carried out using Yagi antennas that were initially constructed using left over materials from the second world war. In 1946 the first simple Yagis were mounted on the roof of the WWII block house. As shown in the pictures below, successively more elaborate Yagi antennas were built and these were used to survey the sky for sources of radio emission. 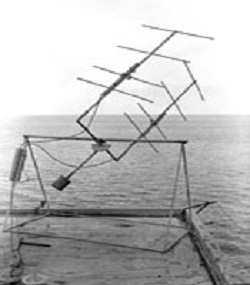 This 2-element Yagi array was erected on a blockhouse at Dover Heights in February 1947. [Photo: CSIRO]

Operating at 100 MHz, this 2-element Yagi array was first used by Ruby Payne-Scott, Don Yablsey and John Bolton to study solar radio emission (see also, Radio astronomy – observing explosions on the sun) and later by John Bolton, Gordon Stanley and Bruce Slee for an investigation into compact sources of radio emission. At the time of the photograph the antenna was being used for solar observations. 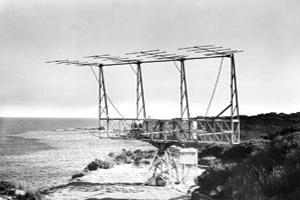 This 8-element Yagi antenna array was later dismantled and the parts used to build the large 12-element antenna shown below. 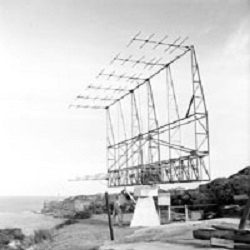 This 12-element Yagi antenna was used in 1952-53 at Dover Heights to continue the survey for new radio sources at 100 MHz. [Photo: CSIRO]

Here this 12-element Yagi antenna is seen looking south along the coast. This was the last of the Yagi antennas to be used at Dover Heights. By the end of the survey, the number of known sources had jumped from a mere handful to more than 100!

Several of the Yagi antennas at Dover Heights were used to take radio observations using a special technique known as sea interferometry. In this technique, the antenna detects radio waves that come directly from a source in the sky. At the same time it detects other radio waves from the source that are reflected off the sea. The two sets of waves are combined and give an ‘interference’ pattern. The strength and size of the source can be measured from the intensity fluctuations recorded on the interference patterns. These were recorded on paper charts. 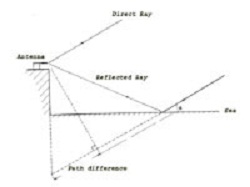 This diagram illustrates the principle of the Sea Interferometer as used at Dover Heights. [Photo: CSIRO]

Radio Waves from the Sun and Nebulae

The Sun was the first object observed with the radio telescopes at Dover Heights. Strong bursts of radio emission were received during times of sunspot activity. 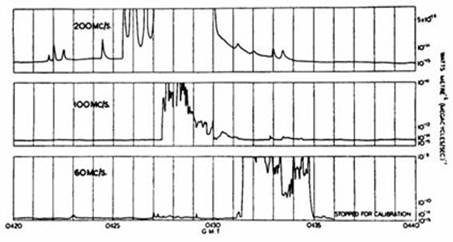 A chart recording obtained in 1947, showing an outburst of radio waves from the Sun at three different radio frequencies (200 MHz, 100 MHz and 60 MHz). Note the different arrival times of the signals at the Earth. [Photo: CSIRO]

When the radio telescopes were pointed towards the sky they revealed areas of concentrated radio emission. Further investigations showed that the radio waves came from gas clouds in our Galaxy. One of the earliest detections was the radio emission from the supernova remnant known as the Crab Nebula. 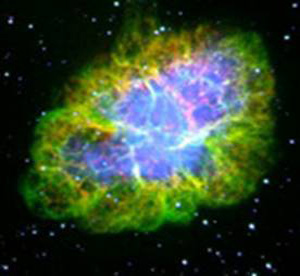 An optical photograph of the Crab Nebula. This is the remains of a star that exploded in AD 1054. The Dover Heights observations showed that this nebula is also a strong radio source. [Photo: NASA/CXC/SAO]

More than 110 sources of radio emission were discovered using the radio telescopes at Dover Heights. A wonderful and unexpected discovery was that many distant galaxies are hugely powerful sources of radio waves. We now know that in some galaxies the radio waves are generated by black holes that are hundreds of millions of times more massive than the Sun. The first extragalactic radio sources to be identified as galaxies were Virgo A, Centaurus A and Cygnus A, all millions of light-years away.

This sea interferometer chart was observed at Dover Heights on 22 October 1948 using a four-element Yagi antenna operating at 200 MHz. From the interference fringes it was possible to calculate that the angular size of Cygnus A was less than eight arcminutes. Cygnus A was the first compact extragalactic radio source to be detected at Dover Heights. The observations had a huge impact on radio astronomy. The interference fringes from Cygnus A seen here show unusual intensity fluctuations.

What is a radio galaxy?

Galaxies contain billions and billions of stars just like our sun. At night we can see the galaxy that we live in stretching across the sky – we call it the Milky Way. Many galaxies contain massive black holes at their centres, sometimes weighing billions of times more than our sun. 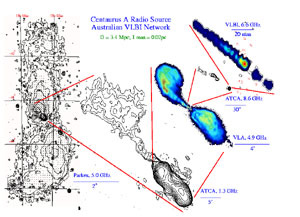 This picture is a montage using images from various sources, and shows one of the very first radio galaxies to be identified, right here at Dover Heights, a radio galaxy called Centaurus A (the name means that it is the brightest radio source in the constellation of Centaurus, the half man and half horse creature of Greek mythology). [Photo: Steven Tingay]

On the left hand side is a complete image of the radio emission from the Centaurus A radio galaxy (made by the ‘Dish’ at Parkes). The other images in the picture, moving from left to right, zoom in closer and closer to the black hole that lies at the centre of the radio galaxy. In the last images you can see the jet of material being produced from near the black hole.

In 1951, the leading radio astronomers at Dover Heights, John Bolton, Gordon Stanley and Bruce Slee, wanted a more powerful instrument than the 12-Yagi array, but the CSIRO Division of Radiophysics could not supply the necessary funding. They therefore decided to build a new radio telescope themselves, using a novel design. With considerable ingenuity, they spent their lunchtimes, over a three-month period excavating a 21.9-m diameter dish-shaped hole in the sand a little to the north-west of the block house. The surface was consolidated with ash, metal strips from packing cases were laid across the surface to provide reflectivity, and a mast with a dipole was erected at the centre of the antenna in order to receive the reflected radio signals. This instrument was the second-largest radio telescope in the world at the time, and by using the rotation of the Earth and altering the positioning of the aerial mast it was possible to observe different regions of the sky.

After Bolton, Stanley and Slee demonstrated that the design concept worked, the ‘hole-in-the ground’ antenna was extended, in 1953, to a diameter of 24.4 metres and the surface was coated with concrete and lined with wire mesh to provide a reflecting surface. 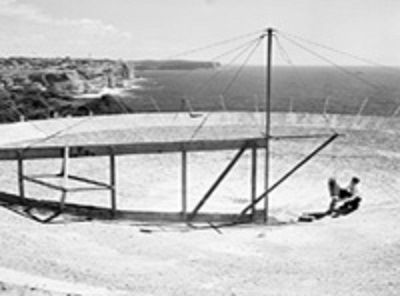 Construction work in February 1953 on the upgraded hole-in-the-ground antenna. South and North Head of Sydney Harbour can be seen in the background. [Photo: CSIRO] 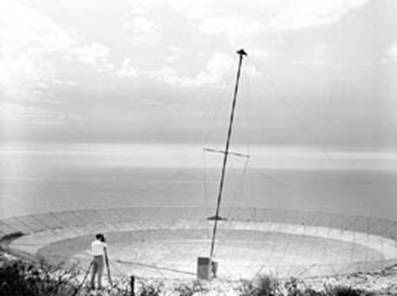 Gordon Stanley is seen using a theodolite to pin-point the position of the antenna mast. [Photo: CSIRO]

This radio telescope was used to survey the sky for radio sources, and for a detailed study of a strong radio source that was detected in the constellation of Sagittarius. The radio astronomers realised that this source (called Sagittarius A) was located at the very centre of our Galaxy! These observations gained further fame for Australia and Dover Heights when in 1958 the International Astronomical Union decided to adopt the position of Sagittarius A as the coordinate centre for the system of galactic ‘latitude’ and ‘longitude’ that is still used today by all astronomers. 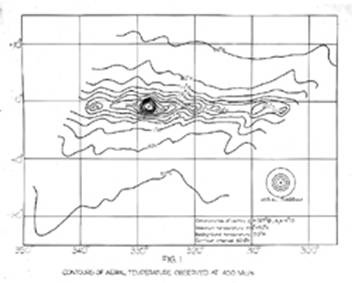 This diagram was obtained from observations taken with the Hole-in-the ground antenna in 1954. [Photo: CSIRO]

This diagram shows contours of radio emission detected at a frequency of 400 MHz, in the region of the Galactic Centre. The strong source near the centre is Sagittarius A. Note that the position of Sagittarius A does not coincide with the centre of the coordinate reference frame at 360 degrees longitude and 0 degrees latitude. The coordinate frame was first determined by optical astronomers, but the Dover Heights investigations revealed the true position of the galactic centre. This new position was subsequently adopted by the International Astronomical Union and the reference frame for all astronomical observations of our Galaxy was adjusted to reflect this.

In 1954 the focus of the Division of Radiophysics shifted to the Fleurs field station, and the Dover Heights facility was closed down, bringing to an end a remarkable decade of scientific breakthroughs and achievement. More than any other field station, Dover Heights helped establish Australia’s reputation as the world’s leading nation in the emerging field of radio astronomy.

To celebrate the history and achievements of the Dover Heights site, the Australia Telescope National Facility, with support from the Waverley Council, has installed a scientific memorial at Rodney Reserve on the original site. This includes a full-size replica of the 8-element Yagi used in 1951 and a display panel with detailed information. The memorial was opened on 20 July 2003 by Her Excellency, Professor Marie Bashir, Governor of New South Wales. The opening ceremony was timed to coincide with a General Assembly meeting of the International Astronomical Union, and many distinguished radio astronomers from around the world attended. 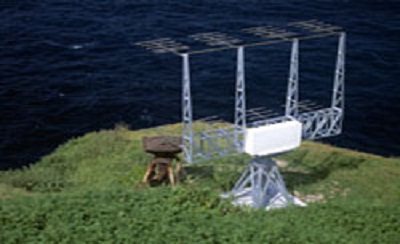 A full size replica of the 8-element Yagi antenna that was used at Dover Heights during 1951 to 1952. The replica has been installed on the cliff top next to the original mount. [Photo: Barnaby Norris] 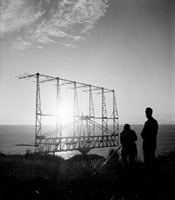