Sticky snakeroot, Mexican devil or Crofton weed – call it what you want - since the early 1900s this weed has been causing grief in Australia. But now the release of a new biological control agent brings some hope.

The tenacious and troublesome Crofton weed (Ageratina adenophora), as it is commonly known, has been running rampant in eastern coastal Australia since it ‘escaped’ from being an ornamental plant in Sydney gardens.

It has taken hold on Lord Howe Island, a World Heritage Area, where it is found mainly in non-accessible areas, making manual removal and herbicide control impractical.

Crofton weed is a serious environmental weed that has invaded agricultural lands as well as 150 reserves in NSW managed by the National Parks and Wildlife Service (NPWS).  It reduces the ecological value of bush land but also affects grazing land on farms by diminishing their carrying capacity.

The weed spread rapidly during the 1940s and 1950s creating dense infestations, particularly along waterways and disturbed areas, inhibiting native regeneration and threatening several vulnerable or endangered native species and communities, including those on Lord Howe Island.

The new biological control agent is a rust fungus that originates from Mexico (where Crofton weed is native) and works by infecting the young leaves and stems of the plant, stunting development and disrupting its ability to reproduce.

This type of biocontrol option is environmentally friendly, cost effective and likely to offer permanent suppression, so it’s regarded as the best solution to manage a range of invasive species.”

“The release of this fungus in Australia is exciting because it could make a big difference in the management of Crofton weed populations,” Dr Morin said.

“Other rust fungi of weeds, such as those introduced previously for the biological control of bridal creeper and rubber vine, have proved to be very effective tools to manage these weeds of national significance.”

The new fungus agent, commonly referred to as Crofton weed rust fungus but scientifically known as Baeodromus eupatorii, has been proved safe for introduction in tests performed by CSIRO and its release in Australia has been approved by all the relevant government authorities.

The first experimental releases are underway this winter, in partnership with the NSW National Parks and Wildlife Service, at various sites across the NSW South Coast region where Crofton weed is dominant.

“We believe the cool and wet conditions that prevail during winter on the NSW coast will be perfect for the Crofton weed rust to establish readily after release,” Dr Morin said.

“Once established in the environment, we’re confident this biological control agent will be self-sustaining, self-disseminating via wind currents, and become a long-term management solution without the need for the rust fungus to be reapplied year after year.

“This type of biocontrol option is environmentally friendly, cost effective and likely to offer permanent suppression, so it’s regarded as the best solution to manage a range of invasive species.”

The Crofton weed biocontrol program is a joint project of the CSIRO, the Rural Industries Research & Development Corporation, the Lord Howe Island Board and the NSW National Parks and Wildlife Service. 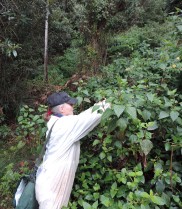 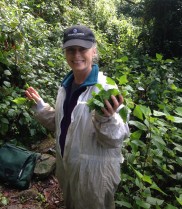