The seasonal influence of aerosols on Australia's tropical climate can now be included in climate models following completion of the first long-term study of fine smoke particles generated by burning of the savanna open woodland and grassland.

Australia’s biomass burning emissions comprise about eight per cent of the global total, ranking third by continent behind Africa (48 per cent) and South America (27 per cent).

“Aerosols play a very important role in modulating climate, yet the knowledge of perhaps the most basic piece of information – the seasonal climatology – remains undetermined for many aerosol producing regions.

“Our latest research defines the aerosol climatology of the Australian savanna – by combining observations from CSIRO and the Bureau of Meteorology monitoring stations across northern Australia, spanning 12-14 years.

“Our latest research defines the aerosol climatology of the Australian savanna – by combining observations from CSIRO and the Bureau of Meteorology monitoring stations across northern Australia, spanning 12-14 years.”

The paper was published in the 3 July print edition of Geophysical Research Letters.

Burning is widespread during the May to October dry season, with approximately 30 per cent by area of the savanna regions lying within Western Australia and the Northern Territory being burnt each season. Similar seasonal burning also takes place in the savanna regions of Queensland.
The majority of burning is carried out deliberately in order to reduce woody undergrowth and promote subsequent grass growth for grazing, although fires also occur naturally through lightning strikes.

The new monthly climatology shows the expected rise in emissions during the late dry season – when most burning takes place – to a peak in October, with clear evidence of dominant fine-particle smoke emission.

The measurements were carried out at three widely-separated stations across northern Australia.

“It was expected that there would be a lot of variation between the stations due to differences in the timing and intensity of fires, combined with separations of up to 800 kilometres.

“You expect to see a relationship between the measurements if you average them over time, say a month, as the day to day variations are smoothed out and the ‘seasonal’ factors of fuel flammability and meteorology take over. The measurements indeed confirm this.

“Surprisingly, the relationship remains high even for periods as short as five days. This tells us something unexpected about the combustion and transport of the smoke that needs to be captured by fire models. It also tells us that having just one seasonal cycle for the entire Australian savanna might be enough – simplifying the task of properly representing this aerosol in climate models,” Dr Mitchell said.

This research connects with the carbon cycle work of Dr Vanessa Haverd and her team, who recently showed that lack of adequate fire modelling in the Australian savanna contributes very large uncertainty to the regional and national carbon budget.

Dr Mitchell anticipates that the results of the paper will be used to guide development of a fire model for this region.

The research was supported by the Australian Government’s Climate Change Science Program, the US Department of Energy, and Bureau of Meteorology observers. 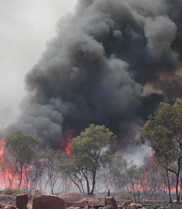 Fine particles generated by burning of the tropical savanna of Northern Australia are a globally significant aerosol source, with impacts on regional climate and air quality. (Image: Susan Campbell, CSIRO)

Previous post:
Marine and Atmospheric Research Divisions
Coming up next:
International partnership to protect us from deadly viruses