Updated 26 Oct 2022 to include details of the ETA options.
Robert C. Bell

By early 1989, it was probably clear to all that CSIRO science research was not going to be well served by PAXUS, with its decision to go to an all IBM-compatible host services.  Pressure was probably mounted by the Divisions with large computing needs (e.g. Atmospheric Research), for a replacement system and service for the Cyber 205 and CSIRONET.  The CSIRO Policy Committee on Computing managed the policy on CSIRO computing facilities. In 1989, it set up the Supercomputing Facilities Task Force, to decide on follow-on facilities from the Cyber 205.

In 1989, CSIRO, and in particular the Division of Atmospheric Research, was looking at options to replace the Csironet Cyber 205 (although by then CSIRO had taken over ownership).

CDC had spun off a new company, ETA Systems, to develop a compatible follow-on product from the Cyber 205, producing a range of four systems – ETA-10E ETA-10G, ETA-10P and ETA-10Q – the first two being immersed in liquid nitrogen to allow for higher clock speeds, and the others being air-cooled.  Each machine had a common single-board processor.

The Bureau of Meteorology had ordered an air-cooled model.

Unfortunately, on 17 April 1989, CDC/ETA announced the closure of ETA systems.  There were offers made for CSIRO and in particular DAR to host an ETA system as an interim solution.

Papers documenting the negotiations have been scanned.

This was set up in early 1989, and was chaired by Mike Coulthard from CSIRO Applied Geomechanics. Other members of the team included Charles Johnson from Materials Science and Engineering (name at the time?), Bob Smart from the Division of Information Technology, Robert Bell from the Division of Atmospheric Research, Don McLean from Radiophysics, with Peter Price from the ACSG and Jose Varghese from Biotechnology contributing. CSIRO issued a call for expressions of interest, asked for a replacement for the 205, that had to be faster, run UNIX, had 10 Gbyte of disc storage, with a few other criteria.

Benchmarks were developed to allow vendors to demonstrate performance.

Proposals were received from CDC (ETA), Convex, Cray Research (one for an X-MP, one for a Y-MP in conjunction with Leading Edge Technologies), IBM and Fujitsu.

Proposals from Cray and Convex were short-listed, and Bob Smart and Rob Bell left on 29th July 1989 to visit Purdue University, CDC, Cray Research, Convex and the National Center for Atmospheric Research, to carry out benchmarking, and to gather information.

At Purdue, Bob and Rob evaluated an ETA-10 running UNIX. After about half the benchmarks didn’t even compile, it was clear that although the ETA-10 might have been an attractive follow-on from the 205, that this was a lost cause, with CDC pulling the plug on the ETA enterprise in April 1989. A visit to CDC in Minneapolis gave no further assurance.

Bob and Rob then visited Cray Research, Convex and NCAR.  (Still jet-lagged after travelling on 4 flights in one day on a long Saturday, Bob and Rob arrived at Cray on the following Tuesday afternoon to find that benchmarking was scheduled from 10 PM to 2 AM!) At Convex, performance issues became evident in access to memory.  There also appeared to be a fault in the floating-point arithmetic.

At a meeting in August 1989, the PCC decided on the Cray Research/Leading Edge Technologies shared Cray Y-MP proposal.  (This happened while Bob Frater, the PCC chair, was absent from the meeting to attend an event at CSIRO Radiophysics, and Alan Reid took over as chair.)  Minter Ellison was called on to do due diligence on LET.

(In 1989, Rob Bell analysed the CSIRO usage of the CDC Cyber 205, and found that 91% of the usage came from researchers based in the Melbourne area: given the state of network bandwidths available at the time at the dawn of AARNet, the decision was made to base the supercomputer in Melbourne).

Then, negotiations began with LET to establish the Joint Supercomputer Facility service and the machine room to house the Y-MP (which was owned by CSIRO).  (LET already had an X-MP, and had an established seismic data processing business with Tensor Pacific.). 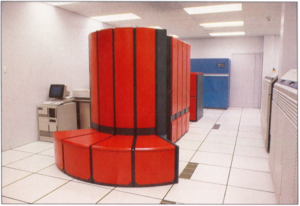 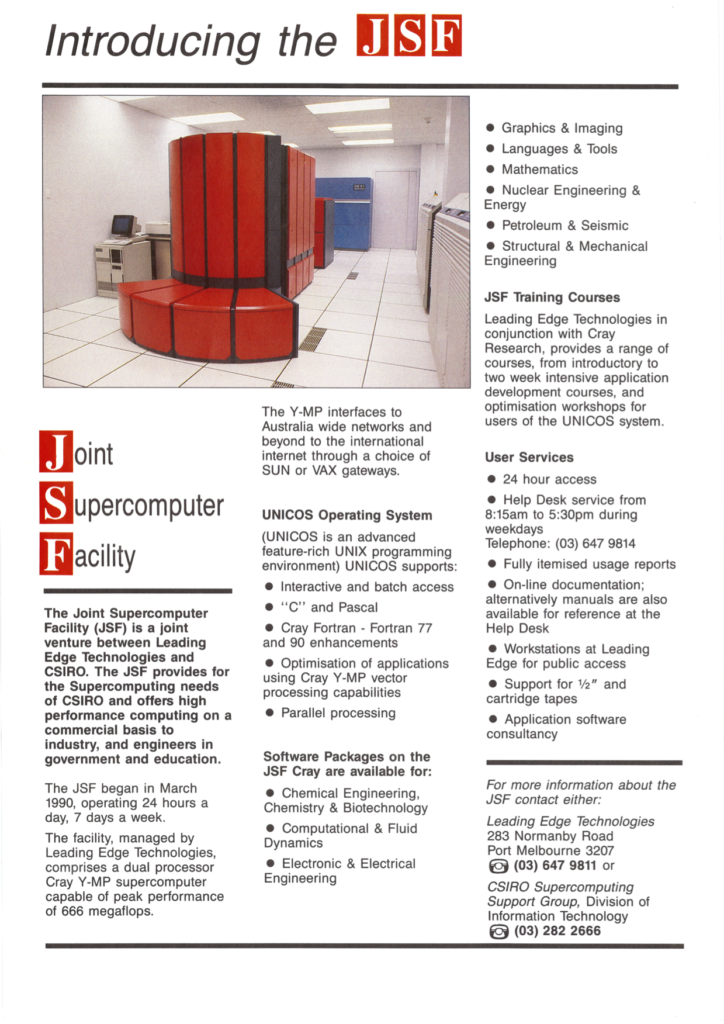 LET’s managing director was Tom Kopp, it employed Peter Boek as general manager, Mark Watson as systems analyst, Richard Hume, and Eva Hatzi as Help Desk person (who became a favourite with many of the CSIRO users), Ken Ho Le as systems administrator and many operators.

Here’s a picture of the Y-MP mainframe with the skins off, showing the hoses containing coolant to the processor boards, some of the wiring which provided the high-speed interconnect between the processors and the many banks of memory; and, Eva Hatzi, Judy Mercure (DIT Communications Manager) and Rob. Bell. 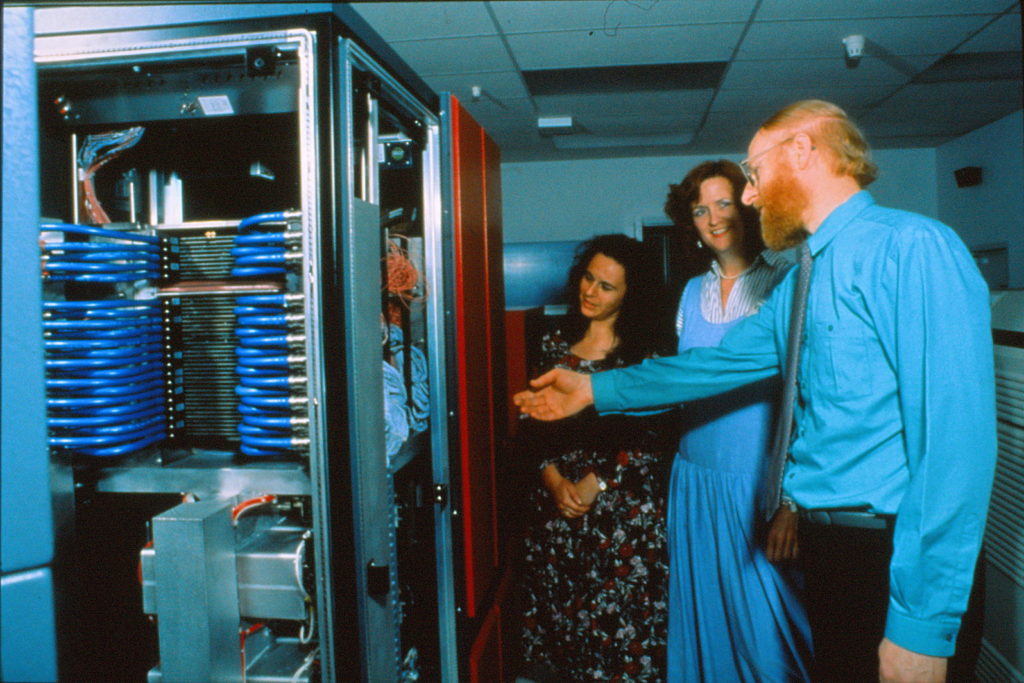 After a battle, funding for the CSIRO part of the JSF was agreed to be taken ‘off the top’ of the CSIRO budget.  However, a write-back process was required to be done each year, when the notional cost of any usage was added to the budget of Divisions, and then taken away again.  This had the purpose of reflecting in Divisional budgets the full cost of their research, including supercomputer usage.  It also upset Divisions’ calculation of their external earnings ratio, since the above process reduced the earnings ratio.

CSIRO Management insisted that Divisions would have to pay for the facility, but after the agreement for off-the-top funding, this became a requirement for Divisions to pay for any enhancements of extras, such as software (!?!) or auxiliary hardware.

A Supercomputing Facilities Users Management Committee (SFUMC) was set up, consisting mainly of about 6 representatives from Divisions, and this had the responsibility to manage the funding arrangements.  A share scheme was set up, whereby Divisions were asked to contribute to a Development Fund, and the shares (in the Fair-Share Scheduler on the system) were set in proportion to the contributions.  (This was modelled, at the suggestion of Trevor Hales, on a scheme operating in Europe for funding shared networks).  A floor price was in effect, with the Division of Atmospheric Research agreeing to carry forward its previous spending on Csironet and the Cyber 205 of $10k per month, and a minimum charge of $100 per month was set.  This enabled funding to be built up, and software of general use was purchased from this fund, as well as storage enhancement such as the cartridge tape drives.  Changes to the scheduling were needed and these became available from Cray (the Fair-share NQS): whereas the original Fair Share scheduling dealt only with contention between running processes on a shared system, we needed the share system to influence which jobs were to be started.  A final tweak to overcome the problem of small contributors being swamped by large contributors was suggested by the Institute Director, Bob Frater, based on some international bodies, where voting rights were set in proportion to the square root of the population.  We set shares in proportion to the square root of the contributions and this worked satisfactorily (although no user is ever happy for his or her jobs to have to wait to run!)

The Cray Y-MP SN 1409 was shutdown on 5 February 1993.  Here is a picture on that day, with Andrea Calamante and Jim Masocco (Cray engineers) and Trevor Palmer (LET).  Len Makin may be obscured behind Andrea.  SN 1409 was transferred to the University of Queensland. 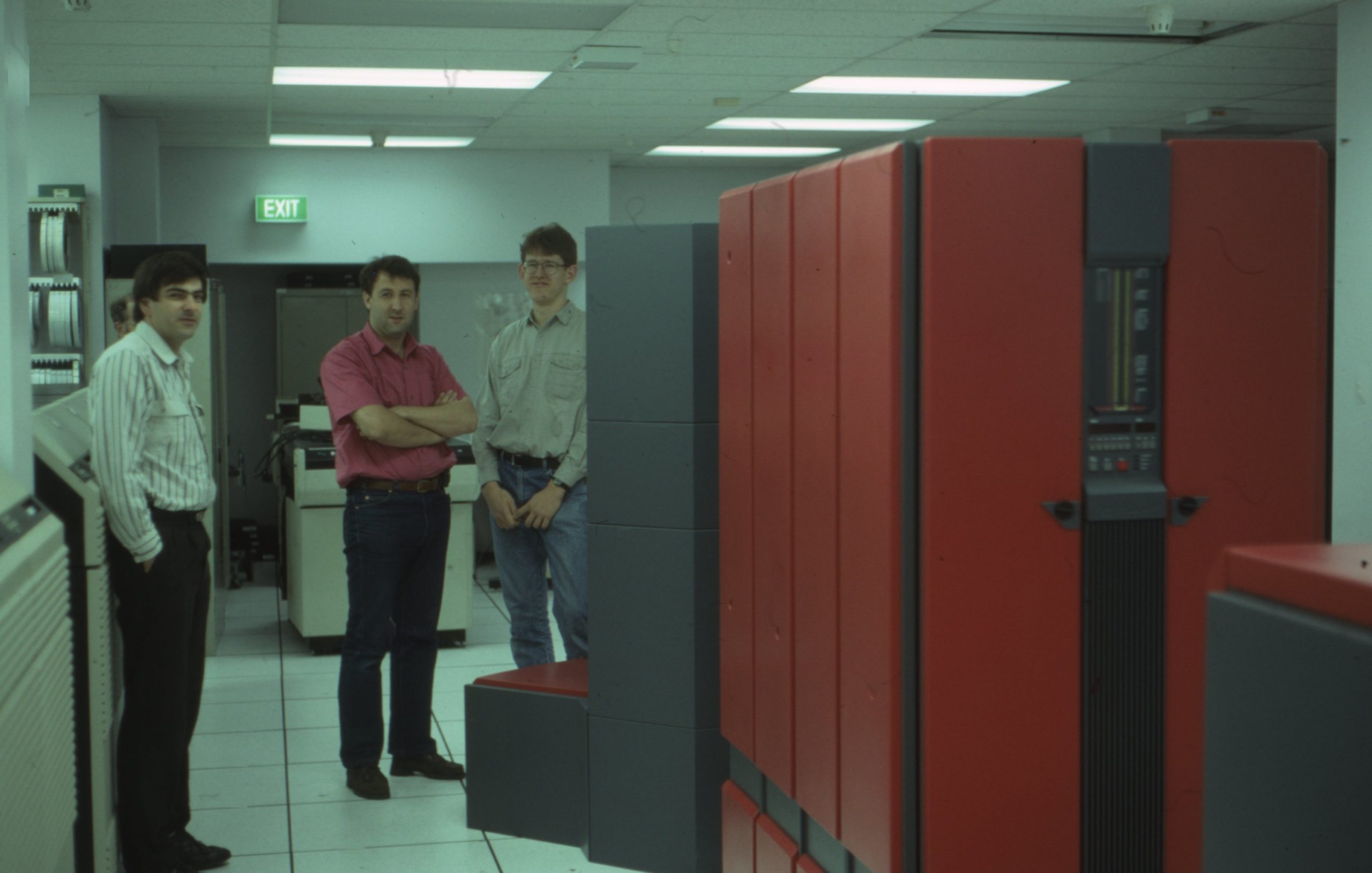