In 2002-3, CSIRO appointed a panel [Jonathan Potter (ITS; Chair), Dave Abel (Mathematical and Information Sciences) and Dr Alf Uhlherr (Molecular Science)] to  review its High Performance Computing services, and concluded that CSIRO was under-spending, that CSIRO needed to diversify its major computing systems beyond the NEC vector SX series, and that more support was needed.  A new group, CSIRO High Performance Scientific Computing was formed, with Dr Rhys Francis as Director and Erika Stojanovic as Executive Co-ordinator from July 2003.  Staff expanded to 12.  In addition, in July 2003 the CSIRO Board agreed to extend the HPCCC relationship with the Bureau for another 4 years, albeit with unequal shares.

This announced the formation of the CSIRO High Performance Scientific Computing, the appointment of Rhys Francis as Director.  It also announced the continuation of the HPCCC with the Bureau until 2007, and the move of staff to Docklands.  It provided details of the SX-6 system, the upgraded Data Store, and the intention to provide a high-end cluster.  It also announced that CSIRO had rejoined APAC, was seeking two new staff members, and was working on a desktop software platform to ease access to disparate compute, storage and software.  Eight staff members were listed.

An SGI Altix system was acquired in 2004 to host the Data Store in the new location, and this system was expanded to provide a system with large shared memory for parallel processing and large-scale data analysis.

HPSC Happenings newsletter no. 2 (March 2004)  reported on the status of the SX-5s and SX-6s, that the Data Store was now live, announced a clusters workshop, reported on MSC software licensing, announced a new staff member to work on the Scientific Desktop, and announced a seminar by Guy Robinson.

HPSC Happenings newsletter no. 3 (May 2004)  reported on the configuration expected by the end of June, with the desktop application, the NEC SX-6/TX7 system, the expanded Altix, the Data Store and the cluster.  It reported on the HPSC Cluster workshop held in March, and the facility to accommodate urgent requirements, or to co-host dedicated additions.

IBM Bladecenter Cluster systems were acquired to provide a new range of services.  One system was dedicated to a particular research project: development of the Relocatable Ocean and Atmospheric Model, ROAM, for the RAN.

HPSC Happenings newsletter no. 4 (June 2004)  reported on the shutdown of the NEC SX-5 systems, and plans for better access to software.

CSIRO collaborated more closely with APAC and partners, to undertake computational tools and techniques development, and to provide GRID services.  CSIRO purchased time on the APAC National Facility, and also made an investment of $0.5M into iVEC, to provide local facilities for WA users.

Staff had grown to 10, with King Lung Chiu and Polly Morgan joining.

HPSC Happenings newsletter no. 5 (August 2004)  reported on the relocation to 700 Collins St, fax and help desk contacts, the installation of two IBM Zeon clusters, the intention to add dedicated extensions to the systems, and the development of the APAC Grid, with Rhys Francis having a dual role of APAC Grid program manager and HPSC Director.

HPSC Happenings newsletter no. 6 (Dec 2004)  reported on an outreach program, with Gareth Williams taking the role of Manager, HPSC Outreach.  In addition, Alf Uhlherr was seconded from Molecular Science, into the Manager, Science Strategy role to assist the HPSC to evaluate and revamp its service offering. Alf was tasked to:

This led to a crucial review of HPC in CSIRO.

There was a write-up of the Bluelink project and its dedicated cluster under the heading, Power user story.

Upgrades over the previous two months were announced:

HPSC Happenings newsletter no. 7 (April 2005)  announced a new website for HPSC, suggested budget provision for software access, announced the installation of the Storage Resource Broker, reported on a surge in data and changes to cope with that, and reported on recent system upgrades – more nodes on the cluster, more disc for the Data Store, and a contribution of $0.5M to s system in Perth for iVEC.  Staff numbers had grown to 12.
HPSC Happenings newsletter no. 8 (June 2005) reported on Growing Computing Resources with the addition of SGI Altix systems at IVEC and APAC, the continuation of the cluster and the NEC SX-6 systems at Docklands, and the holding of 100 Tbytes of primary data in a fully automated disk/tape system.  The item Growing User Base reported 65 new users in the last year, and reported on some fire safety studies carried out using the HPSC facilities.
It was over a year until the next HPSC Happenings – Erika Stojanovic left the group at the end of 2005.
On 1st July 2006, CSIRO HPSC was absorbed into CSIRO IM&T, along with almost all IT staff in Divisions.  A companion stream, eScience, was formed.
HPSC Happenings newsletter no. 9 (July 2006) reported on Leadership of HPSC within IM&T – Rhys Francis was appointed as Executive Manager eScience within IM&T (formerly CSIRO IT), with the HPSC to retain its separate identity and budget.

However in a parallel development, Rhys has accepted a temporary DEST appointment to facilitate the computing infrastructure component (“Platforms for collaboration”) of the government’s planned massive NCRIS investment. While Rhys is on secondment, Dr Robert Bell will take on additional responsibilities, as well as continuing his experienced and successful operational management of CSIRO’s supercomputing capability within the HPCCC joint facility.

Happenings also announced that software access would be free for the coming financial year.  Further items were under the headings of “HPSC platforms cover the full range”, “Planning for the HPSC”, “New Staff” and “New Brochure”.  Under the planning, notice was given that the HPCCC had commenced planning for 2008 and beyond, and invited research group leaders to make their needs known.  The New Staff item noted the appointments of John Giovannis, Daniel Smith and Aaron McDonough, with the retirement of Len Makin.  Teresa Curcio had also joined the team.

By the second half of 2006, Robert Woodcock was appointed acting eScience Director.  Alf Uhlherr joined on 1st May 2007 for a period of three months on secondment from CSIRO Molecular Science.  He started as Executive Manager eScience on 1st October 2007.

In 2007, an extensive review was carried out – the report totalled 95 pages: here. 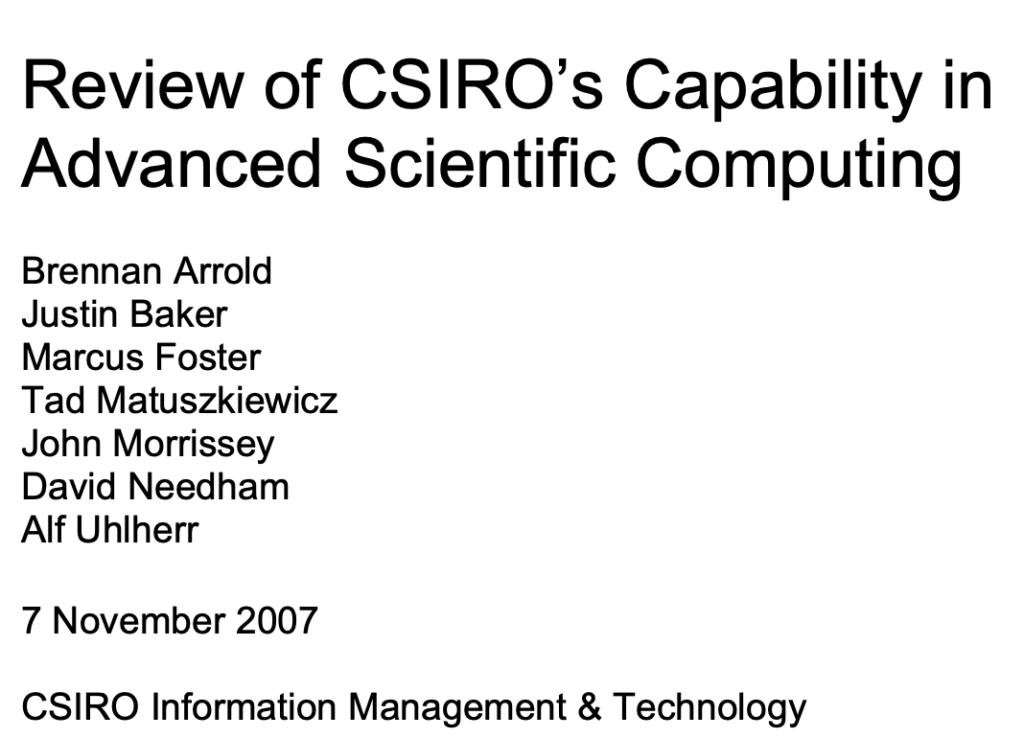 (Appendix 2 contained a “History of High Performance Computing in CSIRO”.)

Here is the Executive Summary:

This was a turning point for scientific computing in CSIRO, and led to the formation of CSIRO Advanced Scientific Computing and the switching of CSIRO’s chief HPC partnership investment from the Bureau to NCI.

Advanced Scientific Computing (ASC) became the official name for the joined eScience and HPSC under CSIRO IM&T on 4th February 2008.

Here are concluding comments from a retrospective written in August 2007.

CSIRO has continued to ride Moore’s law in terms of the processing power available to its scientists through its peak facilities.  A graph is available.

Over the 50 years, it has tried nearly every model of computing services delivery, with mixed success.

Support is crucial to the successful usage of the facilities, and this support has been widely appreciated.