CSIRO has announced the appointment of Dr Bronwyn Harch as chief of its newest research division with a focus on data-driven computational and information sciences.

The new research division, CSIRO Computational Informatics (CCI), will work in partnership with the organisation’s National Research Flagship program to address key national challenges across the information and decision making value chain. It will also work closely with a range of external partners and collaborators to create a capability hub in key research areas including next generation data analytics, autonomous robotics, complex systems modelling, and decision making under uncertainty.

“From pioneering the development of digital image analysis for agriculture in the 1980s to securing the landmark patent to Wireless LAN technology in the 1990s, CSIRO has always been at the forefront of technology-related research which tackles the nation’s toughest challenges,” said Dr Harch.

“The proliferation of smart devices and increasing access to next generation broadband has caused an explosion in the volume, velocity and variety of data and information. With predictions, that by 2020 the average person will own six different smart devices[1] connecting us to over 37 billion ‘things’, from cows in the field to our car to our fridge door through the Internet[2], it is clear the amount of data we produce will continue to grow at an exponential rate,” said Dr Harch.

“We have responded to the information and data challenges facing Australia with the formation of this new CSIRO Computational Informatics (CCI) Division. Our integrated and strengthened capabilities in this division will enable us to remain at the forefront of global developments in key research areas that transform the information and decision making workflows of industry, government and the innovation sectors.”

A recent McKinsey Institute report[3] on the future of ‘disruptive technologies’ shows a reduced focus on new gadgets and gizmos and an increased emphasis on the impact of technologies which require advanced data analytics. The same report predicts that by 2025 the potential economic contribution of new disruptive technologies such as mobile Internet, advanced robotics and 3D printing are expected to return between $14 trillion and $33 trillion globally each year.

Dr Harch believes the new Division’s focus on data-driven science will help CSIRO to increase the economic and social well-being of the nation by tackling some of the biggest challenges facing Australia including our declining productivity and ageing population.

Dr Harch believes the new Division’s focus on data-driven science will help CSIRO to increase the economic and social well-being of the nation by tackling some of the biggest challenges facing Australia including our declining productivity and ageing population.

“Through our Preventative Health Flagship, we are already leading the way in transforming advanced data analytics to pinpoint the genes that could lead to a simple blood screening test for Alzheimer’s disease before it takes hold. We’re also working on another project, with our Digital Productivity and Services Flagship and Australian Centre for Broadband Innovation (ACBI), which leverages next generation broadband networks to monitor health data and help older Australians to live in their own homes longer, independently and safely.”

However, it’s not just the healthcare industry reaping the rewards from this explosion of data. In an impressive debut, research from the CSIRO Computational Informatics Division has earned a staggering 13 nominations across multiple categories from environmental science to the services industries at this year’s iAwards, Australia’s premier technology accolades.

The winners of this year’s iAwards will be announced during a ceremony in Melbourne on 8th August 2013. 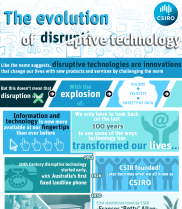 The evolution of disruptive technology over the past 100 years.