Ian Davis was born in the Melbourne suburb of Brighton in 1953. He has one brother Raymond, a retired industrial Chemist. In 1958 his father Charles, a bookseller, and his mother Marjorie purchased a news agency in Yarrawonga where the extended family, including grandfather Leslie Pearmain (a retired accountant), moved.

Ian began primary school at Yarrawonga State School in 1959. The family moved back to Melbourne in late 1964 and Ian completed his primary and secondary education in Melbourne. He was in the first group of students to complete the Victoria Institute of Colleges’ Bachelor of Engineering (Electrical) degree conducted by Caulfield Institute of Technology (CIT) in 1975 (degree conferred early 1976).

From February 1978 to May 1979 he worked as a tutor demonstrator at the Royal Melbourne Institute of Technology’s Department of Communications and Electronic Engineering.

In May 1979 he joined Decca Radar’s Research and Development Laboratories in Walton-on-Thames Surrey, England where he gained experience in antenna systems.

In September 2002 Ian joined the CSIRO’s Division of Telecommunications and Industrial Physics (CTIP) as a senior research scientist. Ian’s team was later transferred to CSIRO ICT Centre at its inauguration in 2003. He was promoted to Principal Research Scientist in 2005 and was the only research scientist of the centre’s project management working group. At CSIRO he worked on several projects as follows:

Feed System for Radio Astronomy – Ian was involved in the development of a new feed system for radio astronomy applications for use on the Parkes Radio Telescope, the Australia Telescope Compact Array and India’s Giant Metrewave Radio Telescope (GMRT).

Since it establishment the team has conducted R&D activities covering: 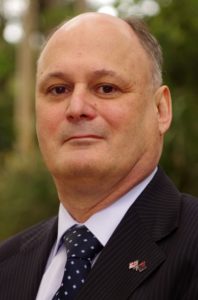