With the rapid growth of the Internet and mobile communications industry and ever-increasing demand on bandwidth, a group of radio scientists in CSIRO in 2002 saw the future need for gigabit wireless backhauls. The multi-gigabit wireless project was established in CSIRO in 2004 with the challenge to develop a 10 gigabits per second (Gbps) digital system operating at the millimetre wave frequencies known as E-band. By the end of 2005, a new signal processing method had been invented to realise the bandwidth efficiency required to deliver the targeted data rate. In mid-2006, a 6 Gbps system had been completed which was scalable to up to 48 Gbps and was the world’s fastest and most spectrally efficient system for wireless communications.

Gigabit wireless networks can be used to complement high speed fibre connections, in infrastructure for mobile communications, and for ad hoc communications services. This technology is at least 100 times faster than current Wireless Local Area Networks.

Achieving fibre-speed wireless communication will enable people to use their computers and other devices such as PDAs to work as efficiently as if they were in an office. It will also allow new business models to evolve based on the ability to collaborate anywhere, anytime on large, bandwidth-intensive projects, such as film post-production.

The technology was launched by Senator Helen Coonan, Minister for Communications, Information and Technology, through a dramatic public demonstration in December 2006 and raised very strong interest from both Australia and overseas. The Gigabit Wireless team was awarded the 2007 CSIRO Chairman’s Medal.

The nature of the problem identified in 2002

With the rapid growth of the Internet and mobile communications industry and ever-increasing demand on bandwidth, a group of radio scientists in CSIRO saw the future need for gigabit wireless backhauls back in 2002. Gigabit wireless backhauls would provide links between the base stations in a cellular system and connect a wireless system to the fibre network. It provides an alternative to a fibre link where it is prohibitive to lay it including built-up areas like city centres and difficult terrains like forests and river crossing.

In 2004, the multi-gigabit wireless project was established in CSIRO ICT Centre to develop a 10 gigabits per second digital system operating at the millimetre wave frequencies known as E-band. The E-band covers frequencies between 71-76 GHz and 81-86 GHz, in which radio waves suffer from only mild atmospheric attenuation. Unlike the crowded microwave frequencies, E-band was newly allocated for fixed wireless communications, and was and still is uncongested. Innovative wideband (over 5 GHz) millimetre wave monolithic integrated circuits and modules had been developed by the CSIRO scientists. The questions then were ‘How do you process 5 GHz of bandwidth?’ and ‘How do you even digitise the signal?’ given the available analogue to digital converters (ADC) and digital to analogue converters (DAC) do not run fast enough. Many ideas were canvassed, but most of them proved too hard to realise.

The multi-gigabit wireless project team received a crucial boost in late 2005, when the team was re-organised and expanded to include scientists with expertise in high-speed digital signal processing, networking and system engineering. This gave the team a strong focus and the expertise it lacked, and led to the cross-fertilisation of different science disciplines. After numerous brain storming sessions, many ideas started to converge.

In the old days, telecomm links used to build up wide bandwidths by gluing together the outputs of low bandwidth voice channels. But their methods were quite wasteful of bandwidth and therefore unaffordable in the current era of spectrum scarcity. Fortunately, with modern analogue to digital converters, digital to analogue converters and signal processing techniques, one now can control precisely what signal is produced and processed. With a little bit of trickery in how to do things, one can eliminate the wastage and deliver the targeted data rate.

Among a number of key innovations, a new frequency-domain multi-channel communication system concept that allows spectrally efficient combining of multiple digital channels into a single radio-frequency channel was generated and patented.

The remaining challenge – getting up to speed

But there was still the challenge of processing data at a total sample rate of 8 G samples per second when most commercial equipment was running at one hundredth of this rate at the time. Even a simple adaptive filter that is normally needed in a receiver to compensate for path errors would require a processing power approaching the equivalent of 1 Teraflop. Current day graphics processing units (GPU) get close to this but they were not available in 2005 and would not be viable for a commercial system nevertheless. Further research revealed that the adaptive filter could be replaced by a much simpler algorithm run on field programmable gate arrays (FPGAs).

To understand the final system, a simplified block diagram is shown in Figure 1 and a real system in shown Figure 2. The system includes a network interface, a digital modem including multiplexing and demultiplexing, an intermediate frequency (IF) module, and a wideband mm-wave front end with a high-directivity antenna. The transmit and receive signals are combined using either a frequency- or time-domain diplexer. At the transmitter (Tx) input, the digital data stream is demultiplexed into digital channels. Each digital channel is generated by a field programmable gate array (FPGA) followed by a high-speed DAC. At the modulator, several identical high data-rate channels are generated by direct computation of the analogue frequency signals. 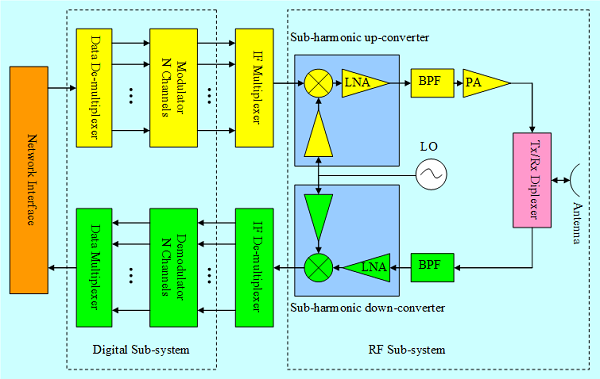 Analogue IF signals of each digital channel are multiplexed in the frequency domain in a spectrally efficient manner without a need of the frequency guard bands between the adjacent channels. The combined IF signal is up-converted into an mm-wave carrier frequency amplified and transmitted over a line of sight (LoS) path. At the receiver (Rx), the received signal is down-converted from the mm-wave carrier frequency into IF and demultiplexed in the frequency domain into multiple channels, then sampled by the high-speed ADCs and decoded by the FPGA into digital channels and then multiplexed into a single data stream. Furthermore, the mm-wave transceiver uses heterodyne architectures with sub-harmonic frequency translation. The implementation of the sub-harmonic local oscillator (LO) allows the reduction of complexity and cost of the transceiver. 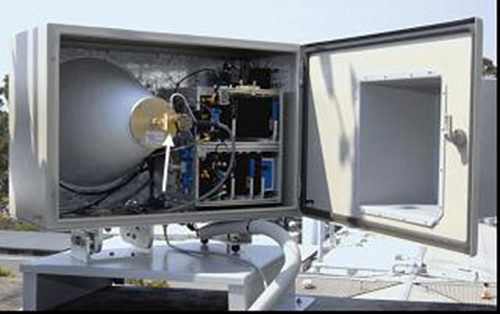 The team went into overdrive and in six months had a prototype built and tested. In mid-2006, a 6 gigabit per second (6Gbps) system was completed (Figure 3), which was scalable to up to 48 Gbps. When the team saw the incredibly low bit error rates and clear ‘eye diagrams’ displayed on the testing equipment, showing the high quality of the signal, everyone took a deep breath and felt a sense of great achievement. It was the world’s fastest and most spectral efficient system for wireless communications. Unfortunately, the work was still unfinished. 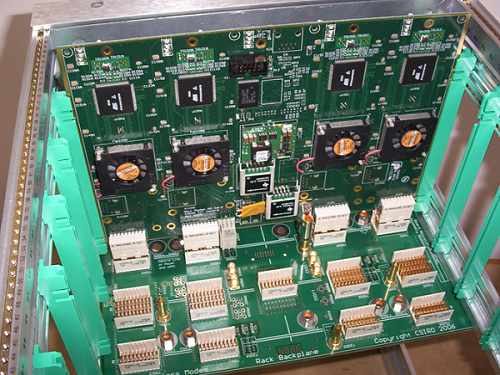 The public launch with a dramatic demonstration

To make a strong impact, the project team made the decision to conduct a public demonstration. When the colleagues from the communications office were invited to see the initial technical demonstration, they raised a couple of seemingly mundane but challenging questions:

In the end, it was suggested that sending 64 simultaneous video feeds over the wireless link might do the trick but this would be a bit excessive. You could not fit so many screens into a demonstration room anyway. Fortunately, the demonstration room in the CSIRO ICT Centre could accommodate 16. This would involve transmitting 16 simultaneous streams of DVD quality video over a 250 metre link and displaying them on 16 screens at the other end. It didn’t really stretch the system as only a quarter of the system capacity (datarate) would be needed but it does get the idea across.

In the following months, the team worked tirelessly to find ways to get the gigabit wireless system to talk to the Gigabit Ethernet, a standard interface for high data rate communications. Finally, a pile of DVD players and a wall of 16 monitors were connected via the gigabit wireless link. All the video steams and the dashing lights generated by the screens got everyone excited when they walked into the demonstration room (Figure 4). It was ready to go. 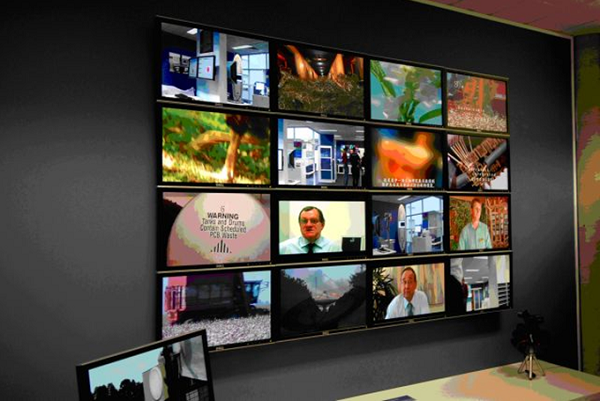 In December 2006, the technology was launched by Senator Helen Coonan, Minister for Communications, Information and Technology, through a public demonstration. It raised very strong interest from both Australia and overseas, especially in the ICT sector and the media. The demonstration made the benefits of such a high data link easy to understand by the public. As Jay Guo explained:

The commercial applications of the technology range from the backhauls of fourth generation (4G) mobile communications networks, connecting high rise buildings in city centres with broadband, and broadband communications between aircraft in the sky.

In 2009, when the Australian Federal government announced the decision to build a national broadband network with $43 billion investment, it became clear immediately that a multi-gigabit wireless backhaul at microwave frequencies would be needed by the National Broadband Network (NBN), but the industry is well lagging behind this demand. Based on its achievements, a new team was assembled in the ‘Broadband for Australia’ Theme in CSIRO to develop a 10 Gbps system at 6-10 GHz. The challenges are different as there is no contiguous wide bandwidth at these low frequencies, but, with the foundation laid by the multi-gigabit wireless team, the new team is making solid progress to address the national challenge. It is expected that the technology will enable Australians living in remote areas to receive broadband services at a data rate comparable to fibre.