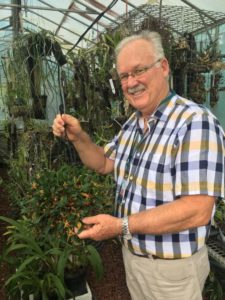 He grew up in Largs Bay in South Australia which is on the Lefevre Peninsula about 16 kilometres northwest of the Adelaide city centre.

Mark’s father was a keen orchid grower and Mark himself developed his own interest from 10 years old.

He attended the Agricultural High School in Adelaide. During his high school years, he completed a course in wool classing which led to his first job, straight after school.

Between 1968 and 1974, Mark continued his training and development as a professional wool classer. Over this period, he worked at many wool shearing sheds throughout South Australia and across the border in Western Australia.

During the two months or so that work was not available, Mark volunteered at the South Australian Museum, where he helped organise some of their natural history collections.

During the six years that he worked as a wool classer, Mark continued to study and learn about orchids.

To pursue his interest in orchids and natural history, Mark decided to move to Canberra. He met with John Wrigley who was the curator of the gardens, at the Australian National Botanic Gardens (ANBG), and was offered a job as a gardener.

By this time, Mark had already developed an interest in the symbiotic relationship between mycorrhiza and the germination of orchids.

After a couple of years working as a gardener, an opportunity to work with the research team at the Gardens became available. Mark took up the position. Soon after, he started a collaboration with a Professor at the Australian National University, looking closely into the relationship between the mycorrhiza and corm cells. He found that some cells had fungal growth while others didn’t.

In 1981, Mark attended the 10th World Orchid Conference in Durban, South Africa. He gave a presentation on his work entitled “Propagation and re-introduction of endangered orchids of Australia”. While at the conference, Mark met Dr Phillip Cribb who thought that Mark’s methods might be able to solve some of the problems with orchids that scientists were facing in the United Kingdom.

Mark was invited to work at the Kew Botanic Gardens, and he started there in 1983. One of the first things he realised was that the laboratory protocols being used for the germination and propagation of orchids were not adequate. He changed the protocols and turned his attention to England’s infamous lady slipper orchid.

This species had been harvested from the wild for flower markets since Victorian times, until only a single plant remained in Yorkshire. Possibly hundreds of years old, this plant had held the title of last survivor for at least 30 years and was protected by security guards during its growing and flowering season. Despite concerted efforts, no-one had been able to propagate it.

Mark used his knowledge of orchid biology and in 1984, was able to finally cultivate the lady slipper, saving it from possible extinction.

During this visit to Kew, he studied the specimens and historical sketches of ‘Lindley’s herbarium collection’ and visited the British Museum of Natural History which contained original drawings by Ferdinand Lucas Bauer. Ferdinand Bauer was the botanical illustrator on Matthew Flinders circumnavigation expedition of Australia.

After returning to Australia, he began his PhD studies on orchid embryology. His thesis was entitled ‘Reproductive Biology in relation to phylogeny of the Orchidaceae, especially the tribe Diurideae.’

Mark was also a pioneer molecular systematist in Australian orchids. He not only prepared classic samples for the Australian National Herbarium collection but had the foresight to store orchid specimens in silica gel, which make them suitable for molecular analysis.

He has collaborated with many scientists throughout his career, contributing to the creation of an orchid phylogenetic tree, which reconstructed their spread and distribution around the world.

In 2016, in recognition of his lifetime of achievements and enormous contributions to the Orchidaceae family, Mark was awarded the prestigious Westonbirt Orchid Medal from the Royal Horticulture Society in the United Kingdom.

The Westonbirt Orchid Medal is awarded annually to individuals for “scientific, literary or any other outstanding personal achievement in connection with orchids”.

Throughout his career, Mark has authored many scientific publications and written and contributed to many books.

He has helped to develop a collection of hardy orchids for the horticultural industry, and been successful in his work to re-introduce endangered orchids into areas of Australia and the UK.

He has also been a lifelong mentor, inspiring many early career scientists, sharing his interest and passion with citizen scientists and demonstrating the value of herbarium collections.

Mark has progressed our understanding and knowledge of the Orchidaceae immeasurably, not just in Australia but in many countries in the world, including the UK.

In early 2021, Mark retired from his position as Research Scientist at the Australian National Herbarium.