Lloyd Thomas Evans was a highly distinguished plant scientist whose research has focused on the physiology of flowering. He was born on 6 August 1927 in Wanganui, in the North Island of New Zealand. He schooling was at Gonville Primary School and Wanganui Collegiate School. He obtained a double major, in both Science and Agricultural Science at the University of New Zealand’s Canterbury College, Christchurch, and completed his MSc at Lincoln College in the area of ecology.

He was awarded a Rhodes Scholarship and completed a PhD at Oxford University Scholar in 1954. While his doctoral thesis had been on soil science, Lloyd wanted to work with plants and he spent two years on a Harkness Fellowship, working with Frits Went at the California Institute of Technology where Went had built the world’s first phytotron. It was hear that he began his work on the phenomenon of photoperiodism – how plants respond to the light period.

In response to an invitation from Otto Frankel, Lloyd joined CSIRO Division of Plant Industry in 1956 where he was the biologist in charge of the establishment of CERES, the controlled environment research facility known as the phytotron. As Lloyd recalled:

We got backing from the Executive for the first stages and we built a pilot greenhouse where we were able to test all the equipment, find what faults there were and correct those. Also, however, we were able to work out what all the services were that we would need and how the building could be put together, while Otto searched for money. It was a big problem, because initially

I laboured hard to produce a publicity booklet saying what a phytotron would do, so we could hand it out to people, and it seemed to work with the government if not with the private donors. The CSIRO Executive decided to put up the two projects to Cabinet at the same time: the radio telescope, for which

He was a Commonwealth Fund Harkness Fellow at the Californian Institute of Technology 1954-56; National Academy of Science Pioneer Fellow, US Department of Agriculture in 1963-64; an Overseas Fellow, Churchill College, Cambridge University, UK in 1969-70 and a visiting Fellow, Wolfson College, Cambridge University, UK in 1978. His major research interests over his career were:

The physiology of flowering

Where using the test plant, the ordinary grass Lolium temulentum, he showed that in addition to the plant producing something that induces it to flower it also stopped producing a signal that was preventing it from flowering. As Lloyd recalled:
The conclusion from the experiment was clearly that both processes operated. There was a message from the long-day leaf to the shoot apex, switching it on, and there was a message from the short-day leaves that reduced the flowering response or would stop it, in the absence of any positive stimulus.

I got into hot water with the high priest of flowering physiology, Anton Lang – a good friend of mine and colleague but we traded punches quite a lot – who ‘gave me the works’ in his criticism. But subsequently, 15 years later when he had convinced himself that my finding was correct, he was gracious enough in defeat to send me a postcard saying, ‘In hindsight I should have done the anti-florigen grafts at the same time as we did the pro-florigen grafts’.

The next question was what the messenger is, what it is that switches on the shoot apex to make leaves instead of flowers. This turned out to be a complex answer – the plant hormone gibberellic acid but which one, there are over 150 of them. As Lloyd recalled:

Around 1990, about the time I retired, we were concentrating on defining which parts of the molecule are important. It is quite a complex molecule, with four rings and various hydroxyl groups attached here and there. It depends very much on where the hydroxyl groups are. For example, if it is a hydroxyl group on carbon 2, no flowering. On carbon 3 and not on carbon 2, very good flowering. So Lew has been able to present us with all sorts of opportunities for defining the important elements of the structure.

In his study of various strains of kangaroo grass, Themeda australis, collected from all over Australia, Evans found that they were beautifully adapted to their geographic zone. Strains up north – where you get summer rain and the optimum time to flower is at the end of the summer, at the end of the wet season – needed the short days of early autumn to make them flower. They were strict short-day plants, down to Brisbane. By the time you had got to Brisbane they were intermediate-day plants: they flowered not in long days, not in short days, but in 12-hour or 13-hour days. From Sydney south, they needed long days, and the mountainous strains needed cold as well, which they got. As you moved towards the desert they didn’t need anything: they flowered when they got rain.

This was the second major strand of Lloyd Evans research career. The question of what limits crop yields, was ‘hot topic’ in the 1950s and 60s. While most people favoured photosynthesis as the limiting factor, Lloyd argued that in addition the wheat ear has to have the capacity to store the starch in the grain and the demand from the wheat ear for sugars to build its starches could also be an important component in yield development. He went to the Plant Breeding Institute at Cambridge and with John Bingham carried out a major trial comparing wheat varieties introduced in the 1880s with varieties introduced in the 1970s, to see how much, under ideal conditions, each variety could produce. As Lloyd recalled:

I spent a lot of time trying to define what was involved in yield potential, in the characteristics of the grain. The early models focused on producing sugar by photosynthesis and they just assumed that yield would reflect that, but it doesn’t always because other things might be limiting. The sugars have to be moved from the leaves to the ear, so the translocation system can be a limitation, as we showed. And then what characteristics of the ear attract all these sugars to it instead of to the competing roots, tillers, leaves or whatever? I did a lot of work on what makes an effective sink for these compounds. 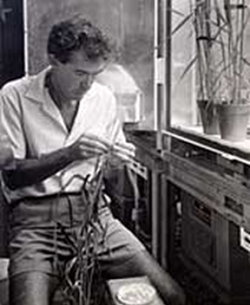 In one interesting experiment I was trying to get the plants to set more grains than they normally would. Each spikelet of the wheat ear has up to seven or nine florets and they could each set a grain. The question was what would happen if we bred wheats with the capacity to set more grains. So I sterilised the bottom two flowers by putting little hats over them so the third, fourth, fifth flowers could set grains. Then I came back, took the hats off and pollinated the two bottom ones, which were still receptive, so that now they suddenly had five or six grains to support. What would happen in a situation like that? And yes, we could increase the grain yield, showing that demand was as important as supply.

He is the author of over 200 published papers and reviews, mainly in the field of plant physiology, and has written several books, some of which have become standard textbooks.

In 1971, he was invited to become Chief of the Division of Plant Industry. He didn’t apply for the job and didn’t want it, but agreed on two conditions. One was that it would be for seven years only, because he really believed that you should get in, do a job and move on, let someone else have a go. The second condition was that he could return to full-time research within the Division, because that is where all the facilities and his colleagues were.

Under his leadership, the Division broadened its research activities from pasture plants to crops. At the time of his appointment the Division had a huge effort on various aspects of pasture growth, productivity and breeding, but very little on crops. As Lloyd recalled:

One reason was that when CSIRO was set up, the State Departments of Agriculture were very chary about this new body and didn’t want it horning in on their crop research – wheat, barley, etc. – which brought them a lot of support from farmers. If we were going to change that, I would have to take the heads of the various state departments in plant matters along with me. So I suggested we should form a committee for plant production which included, with me, the heads of plant research of all the state departments, so we could iron these things out. I think it worked well in the early years, freeing us to develop our crop research ‘ which we did very heavily. Cotton work came into our Division with a bang while I was Chief, and we did a lot more research on wheat and other major crops. Up to that time we had only been authorised to work on pastures, oranges, apples and tobacco. 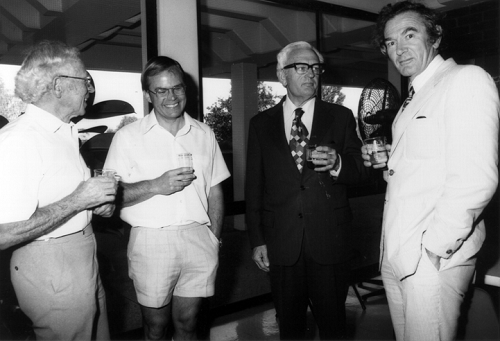 Lloyd Evans received many honours and awards for his outstanding contributions to plant science. He was a Foreign Fellow of the Indian National Academy of Agricultural Science and an Honorary Fellow of the Norwegian Academy of Science and Letters; the Royal Society of New Zealand and the Royal Agricultural Society, England. Other honours and awards include: 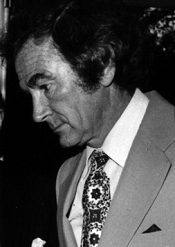