Dr Karl Föger was born in Stams, Austria on 19 October 1948. He attended primary school in Stams followed by high school in Innsbruck. He studied chemistry at the Leopold Franzens University in Innsbruck from 1968 to 1975. He completed his studies with a PhD in Physical Chemistry in 1975 with the thesis ‘Reactions of C6 hydrocarbons over dispersed platinum catalysts’. He came to Australia in 1975, initially on a 3-year postdoc contract with CSIRO.

From 1972-75 he was tutor/lecturer at the Department of Physical Chemistry at the University Innsbruck in Austria.

From 1975-99 he held various research positions at the CSIRO Division of Tribophysics, then Materials Science & Technology, and then Materials & Manufacturing Technology. When he left CSIRO in 1999 he was Chief Research Scientist.

From 1983-84 he was Visiting Professor at the Chemical Engineering Department of Stanford University in California.

In 2001 Dr Föger was appointed Chief Technology Officer, a position he still holds at present. He built a world leading technology and product development team of scientists, engineers and technicians to develop SOFC technology and products incorporating the technology. Currently, he is responsible for corporate technology and product strategy, advises the CEO and Board on technical matters and manages CFCL’s extensive IP portfolio.  He is a member of CFC’s European management team to build a European market focus. Under his technical leadership Ceramic Fuel Cells has demonstrated in 2009 the real potential of solid oxide fuel cell technology, and developed the world’s most efficient electrical generator – BlueGen.

In the initial years at CSIRO, Dr Föger was a member of the Catalysis Group, working in the areas of hydrocarbon processing over Noble Metal catalysts for octane upgrading, development of scientific preparation routes for dispersed metal catalysts, and development of characterisation methods for catalysts including dispersed metal catalysts, zeolites and hydrodesuphurisation catalysts. He became an international recognised expert in this field. For example, the work at Stanford University on EXAFS/XANES of A Co-Mo-hydrodesulfurization catalysts was one of the first studies of determining the active catalyst phase during a catalytic reaction.

Later on Dr Föger expanded his field of interest to pollution control catalysts (stationary and automotive), and selective oxidation reactions. The upgrading of Natural Gas to liquid fuels was a ‘hot topic’ in the 1980s, and Dr Föger worked on direct oxidation of methane to products such as methanol and formaldehyde. The oxygen pump membrane reactor work for controlled partial oxidation of methane brought Dr Föger in contact with the solid oxide fuel cell technology.

In1989 he joined Drs Badwal and Murray on the solid oxide fuel cell project that was spun out of CSIRO as Ceramic Fuel Cells in 1992. He quickly established himself in this field, and today is an international recognised expert in the field. As the ‘father’ of BlueGen, Dr Föger is recognised as having demonstrated the ultimate potential of solid oxide fuel cell technology. 60% net electrical efficiency was unheard off for a 1.5kW generator (only the most modern combined cycle gas turbine systems in sizes >500MW approach these efficiencies), and it took some time (with data from installations at customer sites) to convince the science and engineering fraternity in the field that these data are real and not just a cheap marketing trick.

Despite the demands of a senior management position and member of the Executive Management Team in Ceramic Fuel Cells – managing technology and product development, being the technology face for the company with investors, partners and customers, business development in Europe and managing the company’s IP portfolio, Dr Föger maintained his passion for science. Besides  fuel cell technology, catalysis also remained a strong interest for Dr Föger, in the areas of fuel processing at Ceramic Fuel Cells and in the field of pollution control catalysts through his collaboration with Professor Bhargava’s group at the Department of Applied Chemistry at RMIT University, where he is Adjunct Professor.

Apart from scientific aspects, Dr Föger has a keen interest in R&D related management processes for (i) efficient and effective technology and product development, (ii) building of highly performing development teams and establishing an innovation culture. Other areas of interest include technology and product strategy for business growth, technology due diligence for M&A opportunities, technology marketing to potential investors, and building and protecting a competitive strategic IP portfolio.

Dr Föger has written several book chapters in the areas of catalysis and fuel cells, over 100 publications in international journals, and is inventor/co-inventor on 6 patents.
He has given over 100 presentations at national and international conferences, many of them as invited speaker.

Membership of boards and professional organisations

Dr Föger’s achievements in his role as technical leader at Ceramic Fuel Cells has been recognised with numerous awards (both personal and for the BlueGen product), the most prestigious listed below:

Previous post:
Improving the way we deliver our science
Coming up next:
Cyril Curtis Curtain 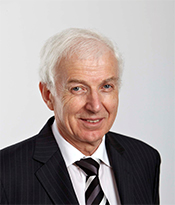