He obtained his BSc in Chemistry and Biochemistry from the University of Melbourne in 1948 and his MSc (1951) and PhD (1953) while at the Walter and Eliza Hall Institute Biophysics Unit (1946-48). His Principal supervisor was Dr Gordon Ada, other supervisors being Mr Henry Holden and Dr Eric French. The Chairman of committee was Professor Sir Macfarlane Burnet. His thesis Titles were:

At the Department of Biochemistry, Oxford University 1954

He spent 1954 in Dr AG Ogston’s laboratory at Oxford where he isolated and characterised the proteins associated with hyaluronic acid in synovial fluid. These proteins give joint fluid its unique visco-elastic properties essential for joint function.

Cyril pioneered immunofluorescence in Australia to study the origin and nature of the abnormal serum globulins found in multiple myeloma and lymphomas, showing these to be greatly elevated normal immunoglobulin components. Where there were two immunochemically distinct proteins present, these were localised to different cells, foreshadowing the one-cell one antibody hypothesis.

In a collaboration with Nobel laureate Dr Carleton Gajdusek in the early phase of his studies on Kuru in New Guinea, Cyril found elevated serum immunoglobulin and gamma-globulin levels in Kuru patients, compared with controls. This was almost certainly correlated with the inanition found in the later stages of the disease and of little direct significance in understanding its pathogenesis. A negative finding of more interest was the lack of any genetic difference, measured over a range of serum protein polymorphisms, between Kuru patients and controls, nor between the susceptible Fore population and its Kuru-free neighbours. This was a useful finding, because it helped soften what had been too sharp a focus on the genetic nature of the disease.

Studies of serum protein polymorphisms and serum protein composition in the Kuru region, was subsequently expanded to cover much of Papua-New Guinea and West Papua, which was financed by a US NIH grant. The aim was to study the effect of environmental factors, particularly malaria and other parasitic diseases on the frequencies of the different polymorphisms. The conclusion was that gene frequencies were primarily determined by patterns of migration, mating and random events acting on small founder populations, rather than any selective action of disease or other environmental factors.

Having established the Division’s Molecular Biology Section, Cyril and his colleagues focussed on identification of the major protective antigens in a number of economically important intestinal parasites of sheep and cattle and dissecting the immune response to them. Up until that time, it had been believed that ruminants were unique in having a different mucosal immunoglobulin class to other mammals, IgG1 instead of the usual IgA. In collaboration with a parasitologist colleague, Dr Norman Anderson, he isolated IgA from the gastric fluid of sheep infected with the round stomach worm, Ostertagia circumcincta. Simultaneously and independently, Professor Alick Lascelles, who was later to become Chief of the Division but then working at Sydney University, isolated IgA from the udders of cows suffering from mastitis. This Australian achievement was extended by carrying out a phylogenetic study of the evolution of the H chains of the ruminant immunoglobulins in collaboration with the veterinarians at the San Diego Zoo. For quarantine reasons this work had to be done in California. As part of their phylogenetic interests Cyril and his colleagues also isolated and characterised satellite DNA from the genome of the sheep and goat, showing that the two species were much more closely related than had been thought at the time. This study had two practical consequences. Short term, it was found that pyrrolizidine alkaloids inhibited the replication of the early-synthesised satellite DNA in sheep liver cells, thus providing a molecular mechanism for the action of this common livestock poison. Then in the late 1980’s this satellite DNA was identified as intronic repeat sequences that are now used in gene-mapping projects for sheep, cattle and other ruminant species.

Biomembranes research -The Biosynthetic Technology Research program managed by Cyril Curtain at the CSIRO Division of Chemical Technology pulled together diverse existing interests in the biosynthetic production of organic chemicals. A biomembranes research unit was included in the program, because many of the bioenergetic processes conducted within membranes might form the bases of new industrial processes. The membrane interest was also a flow-on from Cyril’s interest in (i) cell membrane behaviour in cellular immunity and (ii) the possibility of using the measurement of physical changes in the membranes of sensitised cells when reacting with antigens as the basis for diagnostic tests. Such changes were found using the relatively new technique of electron paramagnetic resonance spectroscopy (EPR). This observation was not commercialised as it was overtaken by simpler tests based on the immunoassay of the cytokines released by lymphocyte-antigen interaction.

Î²-carotene production –  However, EPR was used to study cell surface properties as part of a project to develop new methods for the large scale harvesting of cells. One application was to the harvesting of the halotolerant alga Dunaliella salina (CC Curtain and H Snook, Method for Harvesting Algae: Australian Patent 549051, 1982, US patent 4554390, 1982). This organism had long been recognised as an excellent source of biologically available anti-oxidants, such as Î²-carotene and related pigments, but there had been no commercially viable method of separating the organism from the dilute brine cultures in which it grew. The exploitation of the effect of high salt concentrations on the alga’s membrane became the basis of an enterprise, Betatene Ltd, which is now a division of BASF and the world’s largest producer of biosynthetic beta-carotene and related products (see Î²-carotene industry).

AIDS research – The emergence of AIDs in the 1980’s gave rise to a study of the interactions of HIV with the membranes of the target cell. Earlier work in the biotechnology program had been directed at determining the composition and dynamics of the viral envelope. To this end, in collaboration with Drs Roland Aloia and Larry Gordon, a special containment laboratory was constructed for EPR spectroscopy at the Jerry M Pettis Veterans Administration Hospital, Loma Linda California. Using a special loop-gap resonator made by the Department of Physics, Monash University, extensive EPR studies were made on the small amount of purified virus that was then available. These showed that the virus had a more rigid envelope than the bulk lipid of the host cell membrane and that budding occurred at the grain boundaries of cholesterol-rich regions of the membrane.

Further studies on virus-membrane interactions at the Division of Biomolecular Engineering encompassed investigation of inhibitors of viral envelope – cell membrane fusion. This work was supported by a Commonwealth AIDS Research Grant and led to a patent application for a series of lead compounds. The application was not finalised because an American team had found a more promising target on the gp41 transmembrane protein of the virus than the region CSIRO had been working on.
Post CSIRO 1993 ‘

The final phase of the AIDS studies was with Dr AA Azad‘s group at the Biomolecular Research Institute. In a collaborative project with Assoc. Prof. Frances Separovic (then with the NMR laboratory of the CSIRO Division of Food Research) it was found that the N-terminus of the HIV accessory protein Nef was highly membrane perturbing. The cell biologists in the group confirmed the prediction that this protein would be cytotoxic. A patent was applied for and granted (Azad AA, Macreadie A, Curtain CC, Greenway A, McPhee D: Therapeutic Compounds. Australian Patent No 681885, 1997). Work on the structure of the cytotoxic region and the development of lead inhibitory compounds was supported by one of the Macquarie Bank R&D syndicates.

Cyril Curtain’s research initially was on the metal binding sites of the inherently disordered proteins whose misfolding has been implicated in a range of neurodegenerative diseases, including Alzheimer’s, Parkinson’s, and Kuru and related prion diseases. Recently he and his colleagues have been exploring the use of size-exclusion chromatography coupled to the small angle X-ray scattering beamline at the Australian Synchrotron to study the misfolding of these proteins in real time.

Sixty seven years involvement in community activities in Williamstown and Melbourne’s Inner West began with the organisation of an exhibition of Williamstown’s industries in March 1947 and continues today with secretaryship of the Inner West Branch of the National Trust of Australia (Victoria). In between there have been successful campaigns to prevent the filling of the Bay at Point Gellibrand out to the main shipping Channel.

He was Chair of the Board of The Williamstown Grammar School (1966-1970), and a constant advocate for proper process in planning decisions that still continues today. His concerns for foreshore planning and conservation were recognised by the naming of the section of the foreshore park opposite his residence ‘The Cyril Curtain Reserve’. 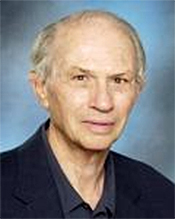