Geoff Hill was born on 16 February 1928 and died on 15 November 1982. He graduated Bachelor of Science from the University of Sydney in 1950 and in 1954 was awarded a Master of Science degree by Sydney University for a thesis entitled ‘Programming for High Speed Computers’: He was awarded the degree of Doctor of Philosophy in 1961 for a thesis entitled ‘Advanced Programming of Digital Computers’.

He joined Maston Beard and Trevor Pearcey, at the Sydney-based CSIR Radiophysics Laboratory in 1949 as a part-time technical assistant. Their goal was to to design and build an electronic computer, referred to as CSIR Mk 1. The resources they had available included the vacuum tube or valve technology and the pulse techniques developed for radar systems during World War II. Their developments parallelled, but were to a considerable extent independent of, computer developments in Europe and the USA.

The CSIR Mk1 ran its first test programs in late 1949, and it was the fifth electronic stored program computer ever developed. It embodied many features novel at the time and was able to operate more than 1000 times faster than the best mechanical calculators. The machine was officially opened in 1951 and used to solve problems both for the Radiophysics Laboratory and outside organisations. It was decommissioned in 1955 and shipped to Melbourne.

Geoff Hill was the main programmer at that time and he used the machine to play musical melodies. These melodies, mostly from popular songs, were; ‘Colonel Bogey’, ‘Bonnie Banks’, ‘Girl with Flaxen Hair’ and so on.

The CSIR Mk1 was dismantled in mid 1955 and moved to The University of Melbourne. On 14 June 1956 the Mk1 was recommissioned and renamed CSIRAC and the new Computation Laboratory at the University of Melbourne was officially opened. CSIRAC was available as a general computing workhorse and in the period from June 1956 to June 1964 processed over 700 computing projects.

In November 1964, Dr. Frank Hirst switched CSIRAC off for the last time and it was donated to the Museum of Victoria. 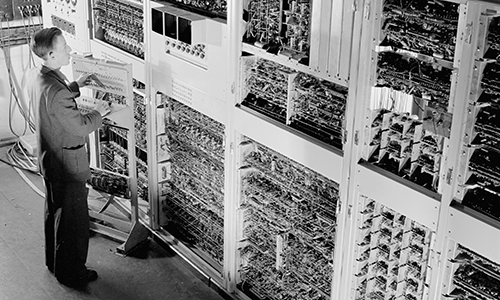 At the Division of Mathematical Statistics

Geoff transferred to the Division of Mathematical Statistics in 1955 and was located in Adelaide. The developments in Melbourne led to his secondment to the CSIRAC Computation. Laboratory in 1957 and he enrolled for the degree of Doctor of Philosophy under the supervision of the late Professor TM Cherry.

The rapid development in computing led the Commonwealth Government to request a survey of future needs. In 1960 CSIRO was asked to ascertain the requirements of all other Commonwealth departments and instrumentalities for scientific computing. The Division of Mathematical Statistics under the leadership of the late Dr EA Cornish was asked to undertake this task and Geoff made a major contribution to its completion. The findings were the foundation for the establishment of the Section (later Division) of Computing Research and the acquisition of major computing equipment within CSIRO. The results of this sound planning are evident in the subsequent development of computing in CSIRO and owe much to Geoff s efforts.

In 1961 he was awarded the degree of Doctor of Philosophy for a thesis entitled ‘Advanced Programming of Digital Computers’. One important development in this thesis was a general mathematical formulation and computer algorithm for the Cornish Fisher expansion. This work was later extended in collaboration with AW Davis to the case of non-normal limit functions [Hill GW, Davis AW, 1968, Generalized asymptotic expansions of Cornish Fisher type. Am. Math Statist, 39, 1264-1 273].

He spent a period at Stanford University in 1963 working with Professor D Teichroew on the computation of statistical distributions using the method of asymptotic expansions. On returning to Adelaide he developed a strong interest in the construction of algorithms and methods of optimisation for use in statistical computation.

His research in mathematical statistics was directed to those aspects for which computing science was relevant and was strongly influenced by his association with both RA Fisher and EA Cornish. This found application in a collaboration with Dr Cornish on an extensive analysis of wheat yield data from South Australia in which he used methods of optimization in the estimation of non-linear regression. This major work was complete at the time of Dr Cornish’s death in early 1973 and was finalised for publication by Geoff and Mr RJ French of the South Australian Department of Agriculture.

He was promoted to Senior Principal Research Scientist in 1971 and in January 1973 at the time of Dr Cornish’s illness, was appointed Acting Chief of the Division, a position in which he served for twenty months and about which the Chairman, Victor Burgmann wrote: I believe you have served the Organization and Division admirably’.

At the Division of Mineral Chemistry

At about this time his interests were stimulated by prospects of applying statistical methods in the developing areas of mineral research in Australia. So it was to pursue these lines of research that he made a further overseas visit in 1975 and spent some time working at the Centre de Morphologie Mathematique Fontainebleau. Shortly after returning to Australia he transferred to the Division of Mineral Chemistry in Melbourne to continue this research.

Geoff had a wide range of interests and these contributed in a remarkable way to developments in a number of areas of CSIRO activities. He played an important part in the formulation of specifications and assessment of tenders prior to the acquisition by CSIRO of its first Control Data computers. After their arrival he stimulated interest within the Organization in their use in areas other than scientific computing.

One important area was the encoding and retrieval of information of value to research scientists. This field was developing overseas and as a result of his advice and enthusiasm the Organization was able to take part in the first experiment in Selective Dissemination of Information (SDI) arranged by the American Chemical Society in 1967/68 using Chemical Abstracts as the source. Geoff also delivered several papers at Library and Information Conferences which demonstrated the role that computers could play in information science.

He was asked by the Chief Librarian to design and write software to control the ordering and purchase of library subscriptions in CSIRO. This work was a pioneering effort in library management in Australia and it is a testimony to its effectiveness that it was still operating in CSIRO at the time of his death . As a result of his involvement in this area of management he was asked to accompany the Chairman, Sir Frederick White, as an adviser to the Commonwealth Agricultural Bureau Review Conference held in Britain in 1970.

Financial management within CSIRO also benefited from his involvement in the establishment of a financial data processing system using CSIRO computers. The Australian Computer Society recognised his contribution to the profession and its activities by electing  him to its Fellowship.

Geoff Hill died suddenly of a heart attack on 15 November 1982 while returning home from work. In his thirty-two years service with CSIRO he became very well known and made many friends because of the diversity of his interests and the pioneering nature of much of his work. Geoff’s life reflected a deep commitment to science and his contribution to CSIRO continues to benefit its activities into the future. 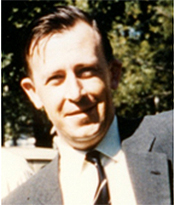