Peter Colman AC FRS FAA FTSE was one of the key scientists involved in determining the structure of influenza virus neuraminidase. This medical breakthrough led to the development of Relenza®, a drug that is effective against all known strains of the influenza virus.

Peter Malcolm Colman was born in Adelaide in 1944. On completion of his secondary schooling at Unley High School he studied Physics at Adelaide University, being awarded the Philips prize for Honours Physics in 1965, and completing his PhD in 1969.

In 1975, Peter Colman was awarded a Queen Elizabeth II Fellowship to conduct research in the laboratory of Professor Hans Freeman at the University of Sydney. There he continued work on antibody fragments whilst collaborating with Mitchell Guss, John Ramshaw and others on the structure of the blue copper-containing redox protein plastocyanin. Shortly before leaving Sydney, work began on crystals of influenza virus neuraminidase (produced by Dr Graeme Laver at the Australian National University’s John Curtin School of Medical Research).

In 1978, he joined CSIRO’s Division of Protein Chemistry in Parkville to form a crystallography group with emphasis on the structure of globular proteins. The neuraminidase problem became his major interest when he moved to the Parkville laboratory where there already was a major influenza virus program being run by Colin Ward.

In 2001, Dr Colman moved to the Walter and Eliza Hall Institute of Medical Research in Parkville to establish and lead the Structural Biology Division. There his research interest has been on the structural biology of proteins in the BCL-2 family and methods for antagonising their function.

The research on the determination of the 3D structure of the influenza virus neuraminidase begun in 1978 culminated in the development of Relenza® by CSIRO and the Victorian College of Pharmacy funded by the Australian biotechnology company Biota Holdings Limited. The influenza work involved the following:

In a related activity, Peter Colman and CSIRO colleagues Jose Varghese and Peter Tulloch and their international collaborators published in Nature in 1987 the first structure of a viral antigen / antibody complex and again made the cover. In this landmark paper they proposed the ‘hand-shake’ model of antibody-antigen interaction.

Other protein crystallography projects included the determination of the structure of phaseolin, the first of several seed storage proteins that were solved (with Mike Lawrence, Jose Varghese, Eikichi Suzuki and Peter Tulloch) and the development of a metric Sc to quantify the geometric fit of two protein surfaces (with Mike Lawrence). This measure of shape complementarity of protein-protein interfaces has since proved enormously successful. The paper has been cited over 410 times and has been used by others to assist for example: understanding the interaction between the T-cell receptor and the MHC/antigen complex [Garcia et al., 1998, Science, 279: 1166-1172] and understanding the intimate packing within amyloid fibres [Nelson et al., 2005, Nature, 435: 773-778].

By 2008, Peter Colman was a named inventor on five patents and had published a total of 134 publications including: 21 review articles, 21 conference proceedings and 92 original papers.

For his role in the discoveries leading to the development of Relenza®, Dr Colman received a number of awards and honours, including:

He has been invited to deliver the following prestigious named Lectures:

In 1993, Time Australia ran the story ‘Through with Flu’ with Peter Colman and Mark von Itzstein (Victorian College of Pharmacy) featured on the cover.

In the 17 November 1999 issue of the London Sunday Times, Peter Colman and Graeme Laver were ranked 56th in a list of The Most Powerful People in Britain and 3rd in the Medicine list.

Find out more
Previous post:
Geoffrey W Hill [1928 – 1982]
Coming up next:
Twitter tool shows a real-time view of our emotions 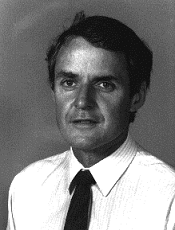