Joseph Noozhumurry Varghese was born in Nairobi, Kenya on 13 March 1949 of parents from Travancore and Cochin in India. His father, Noozhumurry (George) Varghese and mother, Annamma Varghese were teachers in Kenya and George was a High School Principal. Jose’s early schooling was at Usin Gishu Primary School, Eldoret, Kenya.

The family migrated to Newcastle, NSW, Australia in February 1964, and Jose continued his secondary schooling at Newcastle Boys High School. In 1965, his father was appointed as a Senior Lecturer in Education at the University of Queensland in Brisbane. Jose remained in Newcastle to finish his NSW Leaving Certificate with Honours in Physics and Applied Mathematics in 1965.

He moved to the University of Queensland in 1966 to commence an Honours Stream in Physics and Mathematics at the St Lucia Campus under a Commonwealth Undergraduate Scholarship. He obtained his BSc in 1968 majoring in Physics and Mathematics and in 1969 obtained postgraduate Honours in Theoretical Physics with his thesis entitled ‘Electron-electron interactions at relativistic energies’.

In 1970, he was awarded a Commonwealth Postgraduate Scholarship for a PhD in Physics at the University of Western Australia at Nedlands, Perth. He joined Dr Ted Maslen’s X-ray Crystallography Group and carried out research probing the coupling of charge density and thermal motion in molecules by X-ray diffraction. He submitted his PhD Thesis in 1973 entitled ‘Charge density and thermal motion in molecular crystals’ which laid the foundations of extracting the net electric charge on individual atoms in complex molecules using combined X-ray and neutron diffraction.

In 1974, after tutoring at the Physics Department of the University of Queensland, he obtained an ARC Postdoctoral Fellowship to work with Drs Allan White, Graham Chandler and Ted Maslen at the Crystallography Centre, University of Western Australia, on investigating the spin-orbital coupling of transition metal in organic complexes and fundamental studies of obtaining quantum mechanical solutions to the three body problem of the hydrogen ion (H2+) and extending it to larger systems.

In 1977, Jose was awarded a Science Research Council (UK) Postdoctoral Fellowship to study spin transfer in transition metal complexes using polarised neutron scattering at the School of Molecular Sciences, University of Sussex in England. He worked at the experimental nuclear reactors at the Rutherford Laboratories at Oxford, England and at the Institut Laue-Langevin (ILL), Grenoble, France. During this period Jose carried out seminal theoretical and experimental studies of spin transfer in transition metal complexes.

In 1980, he was invited to take up a CSIRO Postdoctoral Fellowship in Dr Peter Colman‘s laboratory in Parkville, Victoria initially to work with Peter on the X-ray structure of the tymovirus Erisimum latent virus. In 1981, he commenced his long and outstanding collaboration with Peter Colman on the determination of the 3D structure of influenza virus neuraminidase. This research culminated in the development of Relenza® by CSIRO and the Victorian College of Pharmacy funded by the Australian biotechnology company Biota Holdings Limited. The ‘flu work involved the following:

During the period 1981-90, Jose Varghese was involved also (with Peter Colman) in the determination of the first structure of a viral antigen/antibody complex, and the development of the ‘hand-shake’ model of antibody-antigen interaction. This was published in Nature in 1987 and again made the cover.

Varghese was also involved in the determination of the structure of phaseolin, the first of several seed storage proteins solved (with Mike Lawrence, Peter Colman, Eikichi Suzuki and Peter Tulloch) and with Dr Steven Wilkins developed the theory of ‘Statistical Geometry’ to process noisy images using Bayesian Statistics. This was the forerunner to the maximum entropy methods now used widely in data analysis.

In 1990, Jose was seconded to the newly formed Biomolecular Research Institute, a joint initiative between the CSIRO and the Victorian Government’s Strategic Research Foundation, and remained there until its closure in December 2000. The BRI was co-located with the CSIRO Division of Biomolecular Engineering at 343 Royal Parade, Parkville. During this decade he:

In 2001, he returned to CSIRO (now the Division of Food and Nutritional Sciences) where he was engaged in the several structural biology programs. In the period 2001-09, he has:

He was a Principal Investigator in a successful bid in the Australian Research Council’s Centre of Excellence in Coherent X-ray Science, which he is partnering with Steve Wilkins of CSIRO Material Science and Engineering. This work was initially within the CSIRO Emerging Science Area of Synchrotron Science to develop non-crystalline structure methods for imaging parasite infected cells and for the determination of membrane protein structures and other novel synchrotron derived methodologies.

He successfully obtained an NIH grant with Dr Jenny Breshkin for the study of drug resistance in influenza virus infections.

Following the successful funding for the storage ring, Varghese helped obtain funding for the beamlines from various other State Governments, CSIRO, other Research Alliances and the Federal Government. He was closely involved in the design of the proposed ring and led the design and construction of two MX beamlines. Both beamlines are close to meeting design specifications.

In addition, he was involved in developing the successful business case for the Victorian Large Scale Computing Initiative led by Melbourne University, and initiated one of the seed projects on the simulation of the REDOX chemistry of Amyloid beta in Alzheimer’s Disease.

In addition, he has over 92 refereed scientific papers including four articles in Nature, three of which appeared in the front cover. His lifetime citations number up to February 2008 was over 4 600.

Recent board and committee memberships 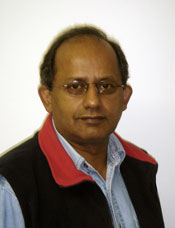