Mineral oil is used as an insulator in electricity transformers, capacitors and switching equipment and independent estimates put the value of transformer oil used worldwide at more than $50 billion. In Australia and overseas, a large proportion of the transformer oils in service are contaminated with various levels of toxic polychlorinated biphenyl (PCB) compounds. These were used as insulating oils in the 1960s and 1970s because of their enhanced thermal, fire safety and stability properties. This old oil represents a major liability within the electricity industry.

The Hydrodec process developed by CSIRO is the only one available that can simultaneously decontaminate transformer oil and also regenerate its electrical properties to a quality as good as, if not superior to, the original product. Hydrodec (hydrodechlorination) is not just a solution for transformer oils and PCBs. It is capable of treating a broad range of persistent organic pollutants including dioxins, pesticides, herbicides and petrochemical waste and can be applied to advanced processes for the production of aluminium and magnesium metals, which produce toxic waste.

The Hydrodec Development Corporation Pty Ltd, was specifically formed to commercialise the technology for application worldwide and listed on the London Stock Exchange as the Hydrodec Group PLC in 2004. Beginning with a 20 000 litre/day plant in regional New South Wales, Hydrodec Group entered the US market in late 2008 with the commissioning of a 100 000 litre/day plant in Ohio. They plan to enter the Japanese and European markets by 2012.

Mineral oil is used as an insulator in electricity transformers, capacitors and switching equipment. The Australian electricity generating and distribution system contains transformer oil valued at $600 million, and independent estimates put the value of transformer oil used worldwide at more than $50 billion.

In the 1960s and 1970s toxic polychlorinated biphenyl (PCB) compounds were used as insulating oils in the electricity industry because of their enhanced thermal, fire safety and stability properties. PCBs were later found to be toxic and subsequently banned in the late 1970s. In Australia and overseas, a large proportion of the transformer oils in service are contaminated with various levels of PCBs, much of it largely as a result of cross contamination across the network. This can represent a significant hazard and precludes normal treatment and/or disposal.

The old oil represents a major liability within the electricity industry. Recycling this oil provides significant economic savings, avoids potential environmental problems and could eliminate the need for transformer oil imports and the costs associated with the disposal of the used product. 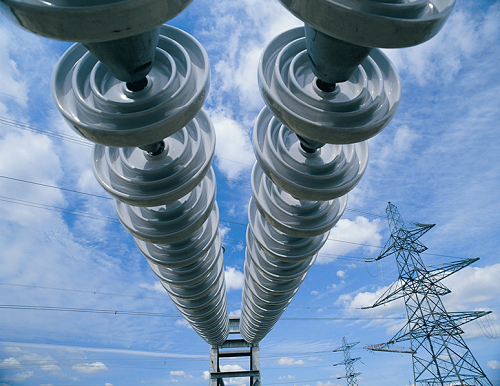 In 1993, CSIRO Energy Technology began its collaboration with TransGrid (the authority responsible for the NSW high voltage electricity network), on the development of a process that regenerates the electrical properties of transformer oils and destroys toxic PCB compounds, without producing any noxious emissions. The process was later registered under the name ‘Hydrodec’.

The project’s primary objectives were:

What is the Hydrodec process?

To eliminate contaminants the transformer oil is reacted with hydrogen over a catalyst, removing the oxygenated and chlorinated species that degrade the electrical properties of the oil. The Hydrodec process restores the electrical properties of the oil to an ‘as new’ condition while destroying any chlorinated hydrocarbons present. Through this unique refining technology degraded transformer oils previously regarded as waste can be fully and safely recovered. 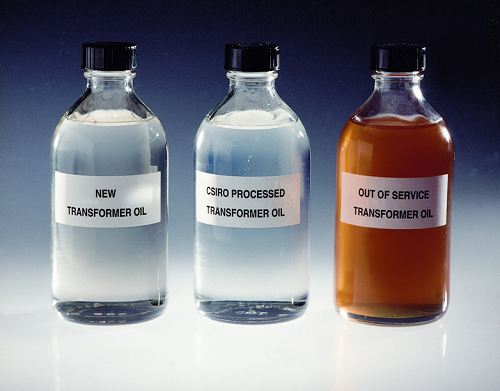 The early development of the Hydrodec process was carried out by scientists from CSIRO Energy Technology (in particular Dr Chris Fookes) in collaboration with personnel from TransGrid, (chiefly Dr Frances Mitchell and Mr Sen Peric). This work was supported through a Generic Technology Grant from the Department of Industry, Technology and Regional Development. More recently there have been on-going collaborations with the technology licensee, Hydrodec Development Corporation Pty Ltd, to scale up the process to a viable commercial technology.

Traditional methods for reconditioning transformer oils are unsuitable for PCB contaminated oils as they produce a contaminated waste that presents another disposal issue. The Hydrodec process is extremely effective in the destruction of PCBs, reducing feed concentrations as high as 1 000 ppm to levels below the detection limit of about 10 parts per billion.

In addition, traditional processes cannot produce oil that has electrical properties comparable with Hydrodec Superfine® transformer oil, a product with superior oxidation stability and high performance characteristics and with specifications equivalent to that of new transformer oil. Not only is the Hydrodec process very effective at restoring the dielectric properties of the oil, it achieves oil yields in excess of 99%.

Implementation of the Hydrodec system translates to significant cost savings in transformer asset management as treated oil can be returned to service and disposal costs are avoided. It also means less crude oil needs to be imported and refined, therefore reducing the greenhouse gas emissions associated with oil production as well as disposal of the product where it is simply burnt as a fuel oil.

Hydrodec is not just a solution for transformer oils and PCBs, it has been proven capable of treating a broad range of persistent organic pollutants including dioxins, pesticides, herbicides and petrochemical waste. High temperature incineration has been a widely used method for disposing of such toxic wastes overseas. However, potential formation of dioxins during this process is the single most important factor raised in public opposition to incineration as a solution to toxic waste destruction in Australia. The chemical process developed by the CSIRO team solves this problem in a very ingenious way. Process conditions make the formation of dioxins totally impossible and our research has shown the Hydrodec process can destroy such chlorinated toxic materials with single pass decontamination factors >99.99999%.

The CSIRO technology can also be applied to advanced processes for the production of aluminium and magnesium metals, which produce toxic waste and for which there has so far been no viable treatment option. When combined with thermal desorption processes our work has shown that Hydrodec could also be used for the treatment of contaminated soils.

The Hydrodec process and equipment are fully patented and have been exclusively licensed to the Hydrodec Development Corporation Pty Ltd, (now Hydrodec Group PLC) a company specifically formed to commercialise the technology for application worldwide and listed on the London Stock Exchange in 2004.

A 20 000 litre/day commercial scale module (scaled up from the 1 000 litres per day pilot plant operated at CSIRO’s Lucas Heights location), is now fully operational in regional New South Wales, processing transformer oil from Australian power utilities. In late 2008 Hydrodec Development Corporation entered the US market with the commissioning of a 100 000 litre/day plant in Ohio with another plant of similar capacity in the planning stage. The US market will be followed by the Japanese and European markets over the coming two to four years.

Beyond its implications for transformer oils the Hydrodec Development Corporation is looking to apply the process to the disposal of a large range of hazardous chlorinated chemicals and wastes without creating toxic by-products or hazardous emissions. This is potentially a very lucrative market.

In June 2008 CSIRO assisted Hydrodec Development Corporation to streamline their operating cash outflows, with the intention of making themselves more attractive to future investors as they move into global expansion, by converting its future royalty stream to a lump sum payment of A$5.6 million. 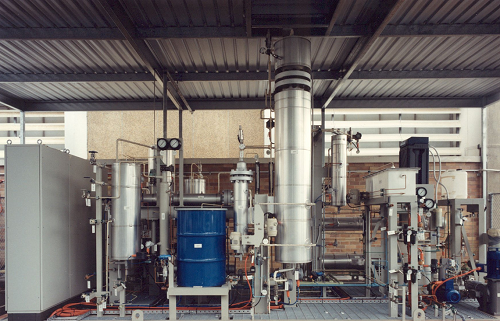