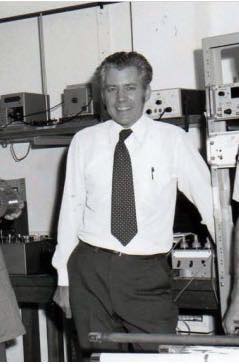 Ian Harvey was born in Mackay Queensland in 1929 and lived his early life on a sugar cane farm. His father Robert Harvey was well versed in the natural world in which the farm was situated. He imparted his sense of wonder and of discovery to him in his early life. It was an important aspect of his life. His mother Dorothy (nee Sheppard) was a school teacher, and ensured that Ian had a broad education with books on many subjects. His continuing formal and informal education equipped him with a ‘smidgeon’ of understanding of the myriad wonders of this world.

His interest in electrical phenomena, initially from books, and then from the actual making of a variety of electrical devices such as motors and the replication of the components of a morse code set. This early practical experience led to the later development of more advanced workshop skills and the ability to design and build a variety of experimental apparatus with working diagrams which were readily understood by workshop artisans.

The farm was ultimately lost as a result of the thirties economic depression. His family moved to the city of Mackay and later to Katoomba in NSW. During his high school years  he lived in Bondi while attending Sydney Technical High School. During this period his interest in radio experiments was supported by the large range of advanced surplus World War 2 radio and radar equipment then available. To further develop practical experience in radio technology, he obtained a Radio Amateurs Certificate of Proficiency which allowed him to legally carry out experiments involving the transmission of radio signals on specified frequency bands. This later led to an interest in satellites and the mathematics of orbital computation.

Ian Harvey joined the CSIR in 1949. On advice from a person who worked in the Radiophysics Division, he decided to explore the possibility of obtaining a position in that Division. He failed to tell Ian that the building had two entrances. By chance Ian entered the National Standards Laboratory, met the acting Chief of the Electricity Division of CSIR, Fred Lehany, and became his assistant with the position of Junior Laboratory Assistant. Ian did not know at that time that the Division had a special ethos which was supportive of creativity. This ethos prevailed over most of his working life. Over time he progressed through all the grades to ultimately becoming Senior Principal Research Scientist.

Ian was always given a high degree of autonomy and was initially involved in a project in Microwave Spectroscopy using the 3,3 absorption line of ammonia to stabilise a microwave oscillator. At the time, he independently measured the frequencies of all of the microwave absorption lines of ammonia achieving good agreement with published theoretical values. He later used this information for K band wave meter calibration.

Ian’s formal tertiary education was obtained by attending night time lectures. The division generously supported him in this endeavour. During this period his informal education in science continued. The facilities available in the Division allowed him to construct a range of personal interest scientific instruments ranging from Geiger Counters to a Proton Precession Magnetometer. Practical experience that few graduates in physics experience.

Working with D.G. Lampard, Ian developed a Probability Distribution Analyser. This sampled an input electrical waveform adding its value to a particular digital channel. Electrostatic memory used a standard cathode ray tube. Digital data was stored as a charge pattern on the inner face of the tube and was sequentially refreshed and updated. By modern technology this was rudimentary but was a challenge at the time.

Having developed an interest in radio navigation, Ian joined the Division of Radiophysics navigation group to investigate the possibility of a distance measuring system based on the ionospheric propagation of a pulsed radio signal. His responsibility related to the reception of an approximate Gaussian pulse transmitted from a remote location. The received signal was a complex combination of ground wave and multiple sky wave pulses all time varying. Ian developed a system to search for and lock on to the ground wave signal from this set of pulses and to remember its position during fading.

Returning to again work with D.G. Lampard and later to be involved in L.U. Hibbard’s Hydrogen Maser group where Ian used the hydrogen emission signal at 1420 MHz to stabilise a low frequency crystal oscillator. This involved the development of a frequency multiplier chain.

On the launch of Sputnik 1 in 1957, Ian initiated regular observations of the transmissions on 40 MHz utilising a Doppler technique. He later fitted an orbit to this data.

During this period Ian investigated a number of aspects relating to his UNSW thesis. Of particular interest was a study and a practical realisation of various low noise parametric amplifier configurations.

A colleague informed Ian of the impending launch of a rocket from Johnson Atoll and the plan to explode a nuclear weapon in the stratosphere. Ian realised this would have startling effects on the ionosphere and on timing pulses being received from NBA Panama. With the assistance of Tea Club members meeting in the Frequency Standards room, Ian established a means of obtaining a photographic record of the received NBA signal. The rocket launch failed. A.M. Thompson who had been a witness to this activity commiserated with Ian regarding the lost opportunity.

Ian became aware of the Josephson Effect arising from the theoretical work of Brian Josephson at Cambridge and immediately realised its significance as a means of linking the Division’s voltage standard to frequency in a relationship involving fundamental atomic constants. Ian spoke to A.M. Thompson and a small group was established comprising J. Macfarlane and R. Frenkel with Ian as leader. The Division’s voltage standard which comprised a group of standard cells was the responsibility of R. Frenkel using advanced mathematical techniques in its maintenance.

Ian visited NBS in Washington to observe preliminary developments in this field. On returning to the Division, he independently developed a measuring system to translate the millivolt level of a simple niobium point contact Josephson effect junction in a helium cryostat to a working voltage equal to the Division’s voltage standard. This was greatly facilitated by the ability to accurately measure the values of two stable ratio resistors in a system previously developed by A.M. Thompson in which resistance is linked to the Calculable Capacitor.

In the development of the Josephson effect measuring system, Ian upgraded existing equipment and manufactured unavailable key components himself. The system quickly became operational and a voltage transfer arranged by the NBS showed agreement of 2 parts in 10 million between respective Josephson effect Voltage references.

Ian later developed a Josephson voltage reference in which all measurements were conducted in super fluid helium. A Cryogenic Current Comparator (CCC) was used to calibrate resistance ratios in the liquid helium. Output at the one volt level was compared with the Division’s voltage standard.

The maintenance of the voltage standard using the Josephson effect quickly became a routine operation allowing the pursuit of individual research interests and continuing responsibilities. Ian embraced the wealth of possibilities deriving from superconducting phenomena and also developed opportunities in unrelated fields.

Ian’s preliminary investigation into impulse or sub-surface radar was further developed by W. Murray who demonstrated its application in many fields of industrial interest. He also originated a portable semiconductor based voltage reference which was taken up by an industrial partner.

A variety of superconducting devices were developed and applied in experiments and practical realisations. Of primary interest were SQUIDS (superconducting quantum interference devices) which display quantum periodicity and have application in the measurement of extremely minute magnetic fields. Ian developed a variety of different niobium squid geometries culminating in a high sensitivity preset five hole total field squid which was fabricated using spark erosion. This was used in the final CCC that Ian developed. An improved preset Josephson Junction in the form of a compact capsule was produced using glass fusion in its construction.

Ian investigated the linearity of the quantum periodicity of a squid using as reference the constant potential steps of a Josephson Junction. Any departure from linearity was attributed to minute magnetic influences in the working environment of the squid.

In association with R. Binks successful high temperature break junction ceramic squids were developed. These squids operated at liquid nitrogen temperature. The superconducting ceramic used in this work was produced by R. Driver who had special skills relating to the fabrication of these materials.

Ian originated the concept of a superconducting device now called a Cryogenic Current Comparator (CCC). This invention achieved several orders of magnitude improvement in accuracy over that of existing technologies. The principle of its operation is outlined with reference to the accompanying figure. 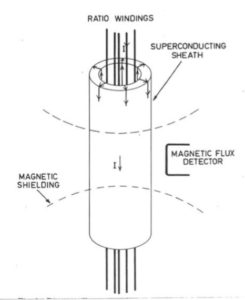 A number of wires are surrounded by a superconducting sheath. As a consequence of the Meissner Effect magnetic fields are excluded from the body of the sheath. Thus an electrical current in any wire produces an equal but oppositely directed current on the inner surface of the sheath. This current then flows on the outer surface of the sheath in the same direction as the original.current. The magnetic field produced by this current is detected using a SQUID. A superconducting Meissner shield provides protection from extraneous magnetic fields. Different current ratios are achieved by appropriate interconnection of the wires. In a well designed CCC no ratio errors are detectable.

The second diagram illustrates the first and the last CCC’s of a sequence of such devices that I developed. The latter unit having no errors to 2 parts in ten billion this being the limit of testing capability being used at the time. 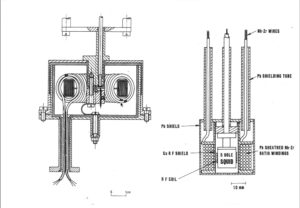 Ian later realised that the concept of the CCC had its origin in a link between two different disciplines and arose from his knowledge of physics and of his practical understanding of radio frequency technology where he used coaxial radio frequency chokes (equivalent to the CCC sheath) in antenna designs.