Robert Roger Ingpen AM, FRSA (born 13 October 1936) is an Australian graphic designer, illustrator, and writer. For his “lasting contribution” as a children’s illustrator he received the biennial, international Hans Christian Andersen Medal in 1986.

From 1968, Mr Ingpen worked as a freelance designer, illustrator and author. He was also a member of a United Nations team in Mexico and Peru until 1975, and was later and he was one of the founding members of the Australian Conservation Foundation.

Mr Ingpen has written and/or illustrated more than 100 published books, including illustrations for the children’s books Storm Boy and River Murray Mary.

Mr Ingpen has designed many postage stamps for Australia, and he designed the flag and coat of arms for the Northern Territory.

In 1963, he created the Land Research Mural at CSIRO’s Black Mountain Laboratories, Canberra.

[Biography section based on text from his Wikipedia page] 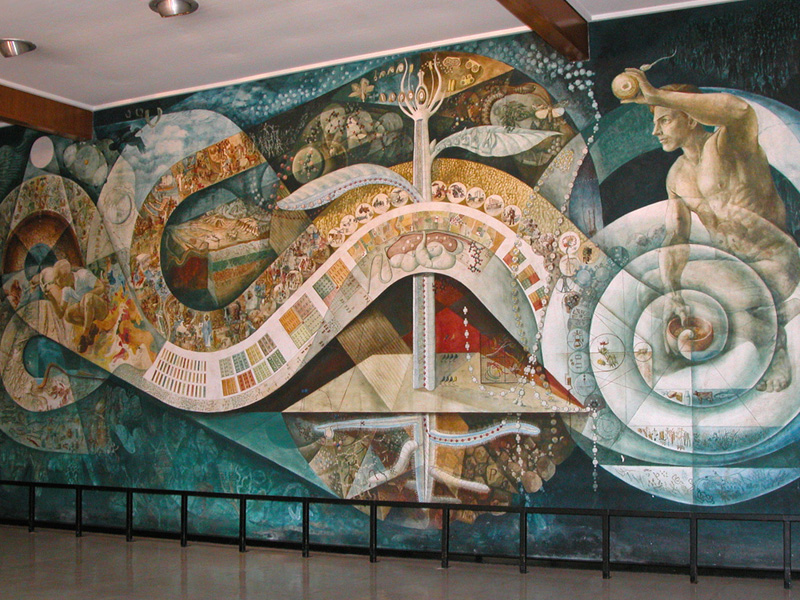 The mural illustrates procedures used by scientists to observe, understand, and modify our natural surroundings to meet increasing demands for adequate food, and was designed and painted by the artist in 1963, when the building was constructed.

Schematic guide to the elements of the Land Research Mural. Numbers correspond to the descriptions in the text below.

The core elements of the mural flow from right to left across the work as shown and described below.

1. Man and his natural surroundings:
Scientists make systematic records of physical, chemical, and biological phenomena, such as climate, topography, soils, water, plants, and animals. The interpretations they make as a result of these observations take the form of special maps and reports (1 a) which enable agricultural scientists to begin to modify natural habitats.

2. Agricultural research:
It can take many years from the first experimental trials on natural habitats to highly developed and managed farms. Apart from fitting innovations and technologies to natural conditions, the habits and economics of society must be taken into account and included in any evaluation of the efficiency of the modified natural habitat as a food producer for humans.

3. The plant as a basic study:
Often the advance of agricultural science is halted by lack of basic information about details of the system under study. Specialist research in the plant sciences, begun as a result of applied problems or by nothing more than human curiosity, supplies applied researchers with solutions to fundamental problems.

4. Man and his self-made surroundings:
Man has the gift of fashioning new habitats, new ideas, and technologies, but he has not yet invented a substitute for his natural surroundings and until he does he must ensure that he exists in balance with his natural world and the modified world he has fashioned.

The mural depicts this balance.

The Land Research Mural can still be seen in the building today at the CSIRO Black Mountain Laboratories in Canberra.

Previous post:
Our origins 1901-1926
Coming up next:
Scribbly gum moths