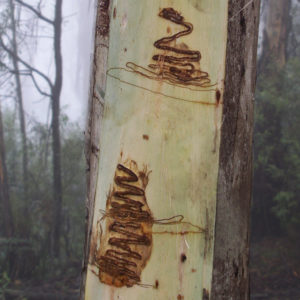 The ‘scribbles’ on scribbly gums are an icon of the Australian bush, but until recently very little was known about the cause of these distinctive scribbles.

A team of CSIRO researchers were the first to uncover the mechanism by which the scribbles are made, along with the biology and lifecycle of the moths responsible. In the process they described eleven new species of moth and redrew how the Ogmograptis species fit into the moth family tree.

The research team completed an investigation into the iconic ‘scribbles’ found on smooth-barked Eucalyptus trees throughout much of southeastern Australia.

They conducted detailed field and laboratory studies into the biology and systematics of the scribbly gum moths, working mainly out of the Australian National Insect Collection.

The research was initially intended to resolve the life history of the moths behind the scribbles, but it revealed much more.

The results were published in Invertebrate Systematics. 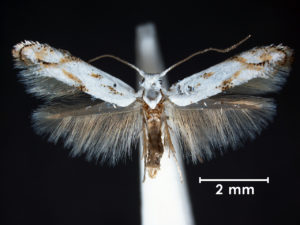 The scribbles: result of a unique ecological interaction 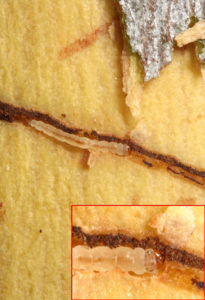 The researchers discovered a previously unknown insect-plant interaction between the scribbly gum moths and their eucalypt host.

The scribbly gum moth larvae bore a meandering tunnel through the eucalypt tree’s bark at the level of the future cork cambium, first in long irregular loops and later in a more regular zigzag which is doubled up after a narrow turning loop.

When the cork cambium starts to produce cork to shed the outer bark it produces scar tissue in response to the feeding of the caterpillar, filling the doubled up part of the larval tunnel with highly nutritious, thin-walled cells.

These replacement cells are ideal food for the caterpillar which moults into its final life stage with legs, turns around and eats its way back along the way it has come. It now grows rapidly to maturity and leaves the tree to spin a cocoon at its base, where it pupates.

Not long after the caterpillar leaves the tree, the bark cracks off and exposes the iconic scribbles beneath.

Eleven new species of scribbly gum moth have been described as part of this research and assigned to the Ogmograptis genus.

The biology of the species that make the scribbles on smooth-barked eucalypts is now also known.

The researchers have expanded the Ogmograptis genus from three species to fourteen named species (with many more known to exist but with too little material for a description) and have confirmed that it belongs to the enigmatic family Bucculatricidae. The larva of Ogmograptis provided unique characteristics to assign it to the Bucculatricidae family and expand and redefine this enigmatic family.

This work for the first time links Ogmograptis to the Australian Tritymba genus, whose larvae make the so-called ‘ghost scribbles’ on eucalypts, and the African Leucoedemia genus. These three southern genera are the sister group of the world-wide genus Bucculatrix.

The researchers demonstrated that Ogmograptis is part of a southern group of Bucculatricidae once living on the supercontinent Gondwana and feeding on southern plant families.

The scribbly gum moth research was the result of a collaboration of unusual depth of experience. The main contributors were all retired but still active as Honorary Fellows at CSIRO. They included:

They collaborated with You Ning Su, CSIRO Ecosystem Sciences, and Stephen Cameron, Queensland University of Technology.

The saga of the scribbly gum moths

The gum-tree stands by the spring.
I peeled its splitting bark
and found the written track
of a life I could not read.

(From A Human Pattern: Selected Poems by Judith Wright. Used with permission.)

Many Australians, especially those on the east coast, are aware of the ‘scribbles’ found on some eucalypt trees – often called scribbly gums. For years they have intrigued bushwalkers and writers.

These distinctive marks decorated the trunks of some of the first gum tree species described by European botanists at Sydney Cove in the late 1700s.

Scribbly gums have found their way into the poems of Judith Wright and the illustrations of May Gibbs’ much loved classic Snugglepot and Cuddlepie.

In the mid-1930s, Mr Tom Greaves from CSIRO Entomology discovered the cause of the scribble. He discovered that the larvae of a very small moth were producing the markings on the bark of snow gums in the Brindabella Ranges west of Canberra.

Adult moths were sent to England for identification and it was found they were from a new genus, which was given the name Ogmograptis and the moth was named O. scribula.

Our knowledge on scribbly gum moths languished for around seventy years until another group of researchers at CSIRO picked up the case.

In 1999, Miss Julia Cooke, a student from Canberra, investigated the cause of the scribbles, as part of her entry in the BHP Science Prize. With the help of Dr Ted Edwards, she compared the scribbles on different species of eucalypts and came to the conclusion that they were different and suggested there might be more than one species of moth. However, nothing was known about the biology of the moth.

In 2005, CSIRO scientists, Dr Max Day and Dr Marianne Horak, and a group of interested helpers undertook a search for the moth larvae. They trapped two species of moth from the local Canberra scribbly gum Eucalyptus rossii and identified two distinct scribble tracks thus confirming that there is more than one species of moth that creates scribble patterns in trees.

The discovery of larvae and pupae enabled the scientists to describe for the first time the life cycle of one species of scribbly gum moth. Eggs are laid in autumn (i.e. April and May) and the larvae develop in the bark through winter. The scribble patterns are caused when they feed on tissues just below the epidermal cells in the tree trunk.

In early summer, the larvae pupate at the base of the tree. The tiny adults that emerge in autumn are only a few millimetres long.

As described above, Dr Max Day, Dr Marianne Horak and Dr Ted Edwards teamed up with some other scientists and described several new moth species and the mechanism by which the ‘scribbles’ are made.