On 1st March, 1954, just before his 17th birthday, Dr Pitt joined CSIRO as a Technical Assistant Grade 1 (Junior). Over the years, he slowly moved up through all research grades, reaching Chief Research Scientist in 1992, at the age of 55. He appears to be the only CSIRO employee to have ever achieved the feat of moving up from TA to CRS. In early years he worked on the preservation of dried fruit, which led into his life long interest in mycological aspects of food spoilage.

Dr Pitt was born on a small farm at Wamberal, on the Central Coast of NSW. His parents were good farmers, but the farm itself was small and barely economically viable. He learnt to plough with a horse, sow, husband and pick a wide variety of fruit and vegetable crops, milk a cow and use an axe – useful skills in later dealings with farmers, but which left him with no wish to become one. He attended a two teacher primary school at Erina Heights, NSW, then Gosford High School. With matriculation achieved, but without a University scholarship, Dr Pitt moved to Sydney in search of work and was lucky to obtain a job with CSIRO Division of Food Preservation and Transport. This initial employment slowly developed into a lifelong career.

After joining CSIRO, Dr Pitt attended the fledgling University of New South Wales part time, studying Food Technology. That was a seven your course, which he completed in eight years. He then undertook an MSc qualifying course at UNSW, and then a part time MSc, studying “Microbiological Problems in Prune Preservation” – which cemented his love for the fungi. A full time PhD at University of California, Davis, studying yeast taxonomy, was followed by a postdoctoral year at the USDA Northern Regional Research Center, Peoria, Illinois (NRRL), under Dr Clifford Hesseltine. There he learnt studied Penicillium taxonomy and the occurrence of mycotoxins. He remained an employee of CSIRO during that time and returned to the Division of Food Preservation at the conclusion of the postdoctoral fellowship.

On 1st March, 1954, just before his 17th birthday, Dr Pitt joined CSIRO as a Technical Assistant Grade 1 (Junior). Over the years, he slowly moved up through all research grades, reaching Chief Research Scientist in 1992, at the age of 55. He appears to be the only CSIRO employee to have ever achieved the feat of moving up from TA to CRS. In early years he worked on the preservation of dried fruit, which led into his life long interest in mycological aspects of food spoilage. After PhD and Postdoc, he was asked by his then Chief Michael Tracey to keep a “watching brief” on mycotoxins as he developed a career as a food mycologist. With the help of many cultures obtained from NRRL when he was a postdoc, he established the FRR fungal culture collection, now a major collection specialising in fungi of importance in food and industrial applications. This collection became the basis for his book “The Genus Penicillium and its teleomorphic States Eupenicillium and Talaromyces” (Academic Press, 1980), the last complete taxonomy of the genus, and later “Fungi and Food Spoilage” (Academic Press, 1985) which he coauthored with his longtime colleague, Dr Ailsa Hocking, who joined him in CSIRO in 1974. Now in its 3rd edition, “Fungi and Food Spoilage” has become the major text on food mycology in use throughout the world.

In the 1970s to 1990s, Drs Pitt and Hocking carried out pioneering work on methods for isolating and identifying foodborne fungi, and on their physiology and ecology, with emphasis on species able to grow at reduced water activity, i.e. those that caused spoilage of dried, partially dried, or inadequately dried foods. Extensive studies were also carried out for the Australian Centre for International Agricultural Research (ACIAR) on the fungi occurring on dried Indonesian fish, and the fungi and mycotoxins that occur in all major Southeast Asian food commodities.

Dr Pitt married his studies of food mycology with mycotoxin research and became an authority on the specific fungi that produce specific mycotoxins. With the discovery in about 1980 of a serious problem with aflatoxin in Australian peanuts, Dr Pitt worked to understand the role of the environment on this issue. He later was a pioneer in the study of biocontrol by competitive exclusion as a promising technique for controlling aflatoxin formation in peanuts and maize. Although this technique is now being widely rolled out in Africa, he was never able to convince himself that biocontrol was a “magic bullet” for controlling aflatoxin formation, but in fact is better regarded as just one more tool in combatting what remains a major public health problem in maize and peanut producing areas of the world.

Dr Pitt completed 65 years of service to CSIRO in March, 2019. Dr Hocking and he worked together for CSIRO for 90 years, with a total length of service of 110 years between them. Dr Pitt has authored, coauthored, edited or co-edited 20 books, and is author or coauthor of 250 research papers and book chapters, 70 of them published since he officially retired in 2002. His Google Scholar h-index exceeds 60. 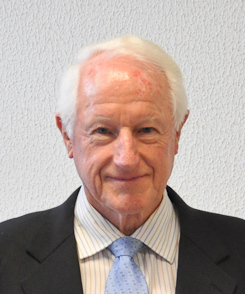