A key facility in an international observing network to detect increasing ocean acidification is monitoring carbon cycling in the Tasman Sea from a site near Maria Island.

The A$150,000 mooring with its suite of environmental sensors is one of three in Australia’s Integrated Marine Observing System (IMOS) that are included in the international network in which Australian scientists at CSIRO and the Australian Institute of Marine Science are playing a central role.

The observations made by the new mooring will provide data to determine the ocean acidification change and will fill a key need in assessing how the marine ecosystems of our region might be impacted.

The mooring was built at CSIRO’s Hobart Marine Laboratories, and deployed late last year at Maria Island, bringing the number of IMOS instruments at the Maria Island site to four. The instruments are managed and operated by CSIRO and the data is available free to the public at CSIRO National Reference Stations and Regional Sensor Arrays or Integrated Marine Observing System .

Others are located on the western side of Kangaroo Island, South Australia, and on the central Great Barrier Reef near Townsville. Extending the IMOS observations into the Southern Ocean is the French Antarctic supply ship l’Astrolabe and the Australian ice breaker, Aurora Australis. The vessels provide a platform for at-sea monitoring during return voyages from October to March between Hobart and the Antarctic bases they visit.

The observations made by the new mooring will provide data to determine the ocean acidification change and will fill a key need in assessing how the marine ecosystems of our region might be impacted.

Leading the acidification research is Dr Bronte Tilbrook from CSIRO’s Wealth from Oceans Flagship, who said the uptake and storage of carbon dioxide by the ocean is causing changes in the seawater chemistry and increasing acidity levels of surface waters.

The potential for impacts from the tropics to the polar oceans is large, and the resilience of ecosystems to these changes is poorly known.

“Elevated levels of carbon dioxide in the atmosphere have made the oceans about 30 per cent more acidic in the past 200 years.

“The ocean takes up about 25 per cent of annual carbon dioxide emissions generated by human activity. The ocean uptake is a great benefit because it removes human-generated emissions, but it comes at the cost of increased acidification of ocean waters.”

“Australia contains many ecosystems that may be sensitive to ocean acidification, including the extensive coral reefs of Northern Australia and down to the polar regions.

“Predicted impacts range from a decline in the growth of shells and skeletons of important species including corals and some shellfish, to shifts in the structure and dynamics of ecosystems,” he said.

Dr Tilbrook said the Australasian region contains some of the world’s most extensive carbonate-based ecosystems, ranging from the coral reefs of the Great Barrier Reef and Indo-Pacific, to the earth’s largest cool-water carbonate platform along the southern Australian shelf.

The surface waters of the Southern Ocean are where some of the most profound shifts in carbonate chemistry will occur by mid-century, potentially influencing the survival of deep-sea coral communities and calcifying pelagic species.

The Maria Island and Great Barrier Reef sites are part of a growing international network of moorings, and are located to characterise changes down the east coast of Australia and the influence of the East Australian Current. The Kangaroo Island mooring monitors deeper waters that can seasonally upwell onto the South Australian continental shelf.  The upwelled waters are expected to have higher carbon dioxide concentrations that could accelerate the exposure of ecosystems to acidification earlier than in other regions.

Sensors on the Maria Island mooring also measure temperature, salinity, oxygen, chlorophyll and turbidity, while water samples are taken each month for plankton and nutrients.  Basic measurement samples have been collected at Maria Island by CSIRO technicians monthly since 1944, providing scientists with an enviable ocean monitoring record.

Dr Erik Van Ooijen and Dr Bronte Tilbrook with the Maria Island mooring before its deployment off the Tasmanian east coast.

Dr Erik Van Ooijen and Dr Bronte Tilbrook with the Maria Island mooring before its deployment off the Tasmanian east coast. 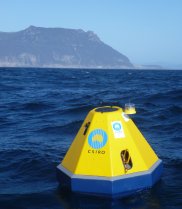 The Maria Island mooring will provide data to determine changes in ocean chemistry and will fill a key need in assessing how the marine ecosystems of our region might be impacted.