Harry Minnett was born at Hurstville in Sydney on 12 June 1917 and lived there until he married in 1955, just prior to being posted to London in 1956. His parents were Frederick Harry Brook Minnett, a nurseryman (born in Paddington, September 1887) and Elsie May Garnsey (born in Dubbo, July 1891). Following their marriage, they established a delicatessen business at a time when Hurstville was expanding.

Harry attended Hurstville Primary School and was Dux in his final year in 1929. He then attended Sydney Boys’ High School, 1930-34. Harry had a brother Bruce who was nine years younger. At an early age Harry was captivated by technology, and at around the age of 15 built a short-wave radio set to listen to overseas stations. This more than anything is seen to have sparked the passion that marked out his future career and dominated so much of his life.

He studied science and engineering at the University of Sydney, where the Professor of Electrical Engineering was the far-seeing JPV Madsen. Harry graduated in Science (Mathematics and Physics) in 1939, and in Engineering (Mechanical and Electrical) with First-Class Honours in 1940.

In April 1940, Harry Minnett joined the Council for Scientific and Industrial Research (CSIR, renamed CSIRO in May 1949), soon after the establishment of the Radiophysics Laboratory for research into advanced radar systems. He remained with the organisation until his retirement in 1981.

In September 1978, Harry was appointed Chief of the Division of Radiophysics for a period of three years, after which he would reach retirement age. In addition to his normal duties as Chief, Harry played a major role in guiding a preliminary proposal for the next-generation radio telescope then called the ‘Australian Synthesis Telescope’. He was also involved in the search for a new Chief who would not only carry forward the concept of the new telescope, its implementation and funding, but would take a lead in initiating new research directions for supporting Australian industry. The position was filled by RH Frater.

Harry retired on 26 June 1981 and was appointed a Senior Fellow in the Division of Radiophysics until 23 October 1981, when he was made an Honorary Fellow until 30 June 1982.

Harry died on 20 December 2003 after a short period of illness.

On joining Pawsey‘s radar research group at CSIR in 1940, he was to play a significant role in developing radio-frequency and antenna-related technologies for radar equipment (or RDF – radio direction finding – the term that was often used at the Laboratory). Harry contributed not only to the design of radio-frequency components such as waveguides, antennas and high-isolation receive-transmit switches for very high-power operation, he also participated in the testing of the radar systems with which he was associated (see Radar). The war-time projects were: 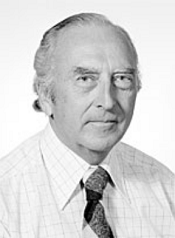