John Paul Wild’s extraordinary work included trains, planes and one very important star. The physicist, solar astronomer, former CSIRO Chairman and visionary was probably best known to the public for his dream of a very fast train that would rush passengers between Sydney and Melbourne in just three hours. In 1983, Dr Wild bought a ticket for the XPT’s first passenger run between Sydney and Canberra. While the train was billed to have a top speed of 160 km/h, Wild noted its average speed over the run was slower than the express services run in the 19th century by the Great Western Railway on the London-to-Exeter line.

In June 1984, Wild unveiled his proposal for a $3.4 billion train that would have carried 400 people between Sydney and Melbourne at 350 km/h. He foresaw 30 Australian made trains making the trip each way, every day. We’re trying to take Australian railways out of the 19th century and into the 21st in one leap

Paul Wild, who died a week short of his 85th birthday, was born in Sheffield, England. The son of a master cutler, Alwyn Wild, and his wife Bessie, he studied mathematics and physics at Cambridge before World War II led him into the Royal Navy as a radar officer. One early problem with the embryonic technology was that it was sometimes jammed by mysterious interference, which was later discovered to be radio noise coming from the sun.

In 1947, Wild joined the Radiophysics Division of Australia’s Council for Scientific and Industrial Research, the forerunner to the CSIRO. After the war they had all these skills and they looked around to see what they could do with them

One of Wild’s first solar radio-observatories, a radio spectrograph, was built at Dapto, in a beautiful setting with green fields surrounded by low hills ‘ and a row of antennas which pointed at the sun 12 hours a day. In the 1960s, Wild secured funding from the Ford Foundation in the United States to build a huge radiotelescope at Culgoora, near Narrabri, designed to look at the sun. Having secured the funding, the CSIRO came to the party and secured the land. For 17 years the radioheliograph ‘a three-kilometre ring of 96 antennas’ gave astronomers an unprecedented look at the corona, the sun’s very tenuous but extremely hot upper atmosphere that extends millions of kilometres above its surface. Until the invention of radiotelescopes the only time scientists could glimpse the workings of the corona was during solar eclipses. It is from the corona that powerful streams of electrons shoot into space. If they strike Earth they can disrupt communications.

Wild was the CSIRO’s Chief of Radiophysics from 1971 to 1978, when he led a team that developed the Interscan radio system, allowing aircraft to ensure that the final approach to the runway was right on target. A colleague, Dr Dennis Cooper, remembered how the project, which involved delicate negotiations with the International Civil Aviation Organisation, revealed Wild as a talented diplomat and a political strategist. He was also an excellent mentor, happy to listen to the ideas of young colleagues, able to grasp complex ideas and explain them simply. Persistence went with his intelligence.

Wild was President of the Radio Astronomy Commission of the International Astronomical Union from 1967 to 1970, and foreign secretary of the Australian Academy of Science 1973-77. He was the CSIRO’s Chairman from 1978 to 1985. Science was not only his passion. Friends remember him as a walking encyclopedia of cricket

The physicist, who outlived two wives, Elaine and Margaret, is survived by his children Peter, Penny and Tim. At his private funeral service in Canberra, Wild’s casket was covered in red, orange, yellow, green, blue, indigo and violet flowers ‘ the colours of the sun’s spectrum. 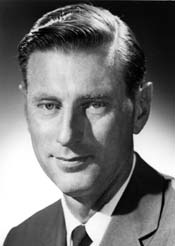