Wireless technologies have revolutionised the way we communicate and do business. From the first television broadcast to today’s adoption of mobile internet, the world is becoming increasingly interconnected. We have developed a new wireless technology called Ngara to deal with the growing threat of mobile data explosion and connecting communities in remote areas.

The challenge: Spectrum crunch and connecting communities across vast landscapes

All of us can admit to using maps when we are lost, watching a YouTube video on the train or finding the nearest restaurant using an app but our increased use of mobile data and the number, variety, and applications of personal mobile devices is driving an unprecedented demand for greater wireless connectivity.

As usage and data rates continue to increase, we need to look at new solutions for solving this problem. We could squeeze more data into the spectrum we currently use, contract the size of mobile data cells which would mean building more mobile towers in urban areas or opening up more available frequency. As we rapidly approach the limit of what science can physically achieve we need to start developing new technologies that can overcome these challenges.

Connecting rural and remote areas to broadband is important not only for economic growth but also for social inclusion, health and safety. This challenge of the ‘digital divide’ is not only facing Australia but populations around the world.

In congested urban environments and areas with sparse population or difficult terrain, laying a fiber network is also very expensive. Current wireless technologies have limited capacity and coverage, and satellite has limitations too due to signal delay or latency.

Industry sectors such as mining and construction are also looking for wireless solutions that can span hundreds of kilometres to deliver high data rates similar to fibre that can be flexibly, cheaply and easily deployed in areas where there is currently no broadband infrastructure.

These are all some of the biggest challenges for Australia’s wireless communications landscape today and into the future.

Our patented Ngara technologies have been designed to efficiently use spectrum and service vast and contrasting geographical areas, with very low population density, and little to no existing or planned fixed-line telecommunications infrastructure.

The technology comprises both wireless access (point to multi-point) and backhaul (point to point) components. 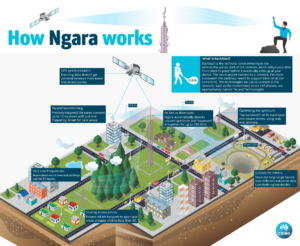 How is Ngara unique?

Our clever wireless researchers have been working for the past few years to develop new software and hardware that can help improve the efficiency, data rate and distance of wireless technology.

One of Ngara’s most unique features is its ‘beam forming’ approach which means it forms beams of signal in the air between antennas rather than spreading the signal continuously over a large area. This means the signal requires much less spectrum to send the same amount of data.

The Ngara wireless system is also quick and cost effective to deploy, making it the ideal solution for meeting short term needs such as emergencies and events.

The technologies we use to connect our devices to the network, such as the transmitters in our mobile phones that connect to base stations, are appropriately named ‘Access’ technologies.

To receive the signal, and transmit back to the network, users connect a modem to a slightly modified version of their existing TV antenna.

Our researchers have successfully demonstrated 12 base stations, each receiving and transmitting a data rate of 50 Megabits-per-second in each direction simultaneously.

The second innovation is wireless backhaul technology. Wireless backhaul is the technical name referring to the backbone of the network, which relays your data from place to place before it eventually ends up at your device. The more people connect to a network, the more bandwidth the backhaul needs to support them all at the same time.

For communities in towns beyond a fibre network, their ‘broadband’ is only as good as their community’s link to the fibre network. Currently these backhauls are generally microwave links which offer 150 Megabits-per-second over some tens of kilometres. This rate is insufficient for next generation broadband applications.

Building on patented technologies, Ngara backhaul can automatically detect unused spectrum and squeeze it together into ‘fat pipes’ so it is possible to pack in more data without needing large chunks of spectrum. By optimising the spectrum Ngara can achieve the bandwidth of 40 traditional microwave dishes, using only one antenna.

About the name Ngara

CSIRO selected Ngara – a word of the Darug people meaning to listen, hear and think – as the name of our wireless broadband technologies.

In acknowledgement of the traditional owners of the land, the Australian Aboriginal and Torres Strait Islander peoples, CSIRO selected Ngara – a word of the Darug people meaning to listen, hear and think – as the name of our wireless broadband technologies.

Darug elders gave their permission to use the word at a ceremony at our laboratory in the Sydney suburb of Marsfield – part of Darug lands.

The artwork to the right was painted by Darug elder Aunty Edna Watson to symbolise these technologies.

The impact: wireless broadband to Australia and beyond

Ubiquitous, superfast broadband will soon underpin how people communicate with one another and how they interact with devices and the environment to a far greater extent than is the case today. Our wireless researchers are playing an important role in developing technology that can help us close the digital divide in areas where laying fibre isn’t feasible due to cost, distance or the inability to dig up certain locations.

We have already licensed both our Ngara technologies to Australian companies who will scale up our system from the lab into commercial grade products for sale in Australia and will boost their competitiveness in overseas markets.

Our researchers have developed and are currently testing a backhaul link of 5 Gigabits-per-second with Australian company EM Solutions and are developing a 10 Gigabit-per-second link that is tens of times faster than current technology: a performance close to that of fibre.

We have also licensed our Ngara Access technology to Australian company RF Technologies for delivering high bandwidth communications to emergency services and public transport vehicles. Using this system, public safety agencies such as police, ambulance and fire fighters access to high-data rate communications in the field for sending and receiving real-time data, tracking assets, and viewing interactive maps and live high definition video from their vehicles.

CSIRO’s Digital Productivity and Services Flagship is looking to conduct a wide scale trial of the Ngara technology in remote communities to demonstrate the system’s reliability and ability to deliver fast reliable broadband, allowing all community members the opportunity to benefit from a digitally broadband enabled health, education and government services.

Looking for a wireless solution?

We’re ready to partner with industry leaders – not just in telecommunications sector, but also government, mining, industry, health and any other sectors which can apply wireless connectivity to improve productivity, performance, profits and social benefits to the community.

Contact our business development team to find out how we can customise a wireless solution for your industry needs.