He obtained his BSc in Chemistry and Physics in 1962 and his BSc(Hons) degree in Physical Chemistry in 1963, from Liverpool University and his PhD from the University of Manchester Institute of Science and Technology in 1967. His thesis title was ‘Uptake of Dye and Inorganic Ions by Wool’.

In 1977 he joined the CSIRO Division of Textile Industry, Geelong, Australia as a research scientist and worked there for the next 29 years until his retirement as a Senior Principal Research Scientist in 2006.

Post CSIRO he has served as a Research Academic, Deakin University (2006-09) and became an Honorary Post Retirement Fellow at the Geelong laboratory which was by then part of the CSIRO Division of Material Science and Engineering.

He is an inventor/co-inventor on 13 patents and author/co-author of 63 original research papers and 5 book chapters.

His career research activities have been mainly on wool, cotton and wool/cotton blends where he has been involved in both fundamental studies and in the development of new industrial processes. Some of the highlights from his career are as follows:

Wool dyeing and the Sirolan-LTD Process

He and his colleagues demonstrated the importance of the cell membrane complex as the preferred pathway of dye diffusion into wool fibres and showed that the decrease in abrasion resistance that occurs when wool is dyed at the boil results from modification of the cell membrane complex. These studies have resulted in the identification of techniques for improving the abrasion resistance of undyed and dyed wool fabrics.

He led the team that utilised the findings on the pathways of dye diffusion into wool to develop a new industrial process for dyeing wool at low temperature, or for a shorter time at the boil (the Sirolan-LTD Process). The patented method used a chemical developed by CSIRO to increase the rate of dye diffusion into the fibre by modifying the cell membrane complex. It was originally commercialised by ICI Australia and is now licensed to APS Nuplex. It is used in a number of countries. The Sirolan-LTD dyeing method has been shown to offer a number of advantages over normal wool dyeing methods, including reduced fibre damage, higher dyebath exhaustion (cleaner effluent) and brighter shades (less yellowing). It also gives lower levels of residual chromium in dye house effluent, compared with conventional dyeing procedures.

With collaborators, he isolated and identified an unusual branched chain C21 fatty acid that is covalently bound to the surface of wool fibres (named the F-layer). It was shown that despite its low concentration ( < 0.025% of the mass of clean wool), it plays an important role in properties controlled by the fibre surface, in particular handle, felting shrinkage and shrinkproofing.

He worked on the development of polymer finishes for preventing felting shrinkage during laundering for which he was awarded the Research Medal of the Worshipful Company of Feltmakers of London in 1974.

He was a member of the team that developed a permanent-press process for all-wool garments. This work was carried out during his secondment to CSIRO in 1970-1971 from the International Wool Secretariat laboratories in Ilkley, Yorkshire, England.

He was a member of the team that developed an industrial method of package dyeing yarn spun from Optim® fibres. Optim® is a new, silk-like textile fibre made by stretching wool fibres. It has, however, a much lower wet modulus than normal wool and Optim® yarn cannot be dyed by standard techniques, because in hot dyebaths the low wet modulus leads to excessive package distortion and uneven results. The new method overcomes this problem.

His research activities with cotton included: 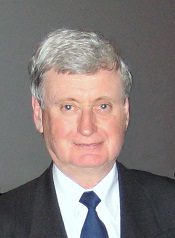