In 1986, Dr Ray Binns and his CSIRO colleagues began a research project based on gaining knowledge of active, ore-forming processes taking place on the modern sea floor and applying that knowledge to help find ore bodies on land that had formed in ancient times.

Results of the research, with emphasis on how the information could be used to guide land-based exploration, were progressively released to a consortium of sponsor companies, while non-confidential outcomes were presented at open meetings and conferences. In both cases, the results were received with high acclaim.

The research then took an exciting turn, when it was discovered that many of the samples discovered during the series of voyages were far richer in copper and gold than mineral deposits found elsewhere in the oceans by other organisations.

This discovery led directly to the formation in Sydney of Nautilus Minerals Inc. now a public company listed on the Toronto and London stock exchanges, and the beginnings of an entirely new industry aimed at mining these rich, seafloor deposits. Two other Australian-based companies have now joined the hunt for what are expected to be billion-dollar resources and for which the mining technology has been developed.

One of the critical aspects of successful mineral exploration is a scientific understanding of how deposits originally formed.

Traditionally, this understanding has been developed from research based on existing ore bodies. However, they have normally been disturbed over geological time by events such as deformation and heating associated with mountain building. Because of this the evidence is often controversial.

In the 1970s, CSIRO was researching an important ore category – polymetallic massive sulfides. This was the ore type from the recently discovered Woodlawn deposit in southern New South Wales, as well as other valuable deposits at Rosebery and Mt Lyell in Tasmania, and Mt Morgan in Queensland.

While there was widespread acceptance that such deposits formed in ancient submarine volcanic environments, progress was held up because of conflicting evidence arising from the deformation and heating of the deposits over time.

Because it usually happens deep within the Earth’s crust it is extremely rare to witness mineral deposits in the process of formation. However, in 1979, an American-French team announced the first discovery of high-temperature volcanic hot-springs on the deep ocean floor that quickly became known as black smokers. The mineral deposits they were forming on the seabed appeared to be a close analogue of the polymetallic massive sulphide deposits exploited on land.

The CSIRO researchers soon realised that the geological setting and associated volcanic rocks for the black smokers discovered by the American-French team were very different from the orebodies they had been studying in eastern Australia. The 1979 discovery had been made at a mid-ocean spreading ridge where tectonic plates were moving apart. More appropriate geological environments were likely in the oceans north of Australia where tectonic plates were instead colliding. 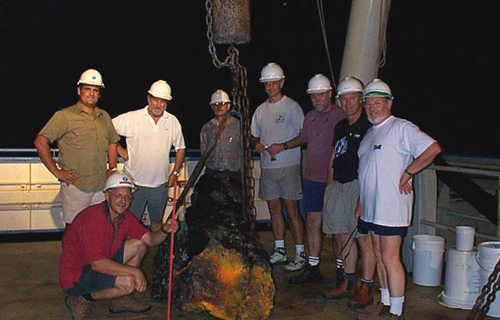 ‘Bikpela’, a giant chimney dredged from RV Franklin in 2000. Ray Binns is on the far right. [Source: Ray Binns, CSIRO]

After early disappointments, the first RV Franklin cruise in the Solomon Sea east of Papua New Guinea discovered Dobu Seamount, a submarine volcano that turned out to have exactly the kind of volcanic rock that had been sought.

Expeditions in 1988 with both RV Franklin and HMAS Cook collected more data and samples. Then in 1990, seven dives up to 3 km below sea level were made in the manned submersibles Mir-1 and Mir-2. These were the same submersibles made famous in the film, Titanic. These dives downgraded the Dobu Seamount target, but found two kinds of actively forming mineral deposits at Franklin Seamount another submarine volcano 90 km to the east which had been named after the CSIRO vessel. One of these proved to contain 20 parts per million of gold, at the time a world record for the oceans. It clarified the origin of a new gold ore type discovered in Indonesia. The other kind confirmed theories about the role of microbes in forming a ferruginous rock type regarded as having significance in the exploration for polymetallic massive sulfides.

Moving north to the Manus Basin in the Bismarck Sea near Rabaul, further expeditions with RV Franklin pinpointed the target polymetallic massive sulphide deposits 1.7 kilometres below sea level on a volcanic ridge with precisely the kind of rock that usually hosted polymetallic sulfide ore bodies back on land. The first site, discovered in 1991, was called PACMANUS, and more were found in later years.

Chemical analyses of samples from PACMANUS showed they were far richer in copper and gold than any mineral deposits previously found elsewhere in the oceans. This raised the fascinating possibility that CSIRO’s discoveries might be a resource in their own right. 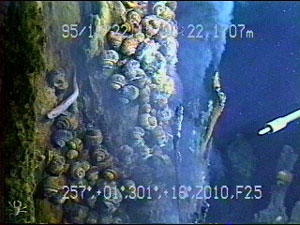 Bitmap mosaic (from video) of active chimneylets at Satanic Mills – one of the sites at PACMANUS. [Source: Ray Binns, CSIRO]

In 1990, an expanded collaboration with the USSR Academy of Sciences was arranged and seven dives up to three kilometres below sea level were conducted in the manned submersibles Mir-1 and Mir-2. Dr Ray Binns was the scientist observer on two of these missions, resulting in the Russians dubbing him ‘Australia’s first hydronaut’. As Ray Binns recalled:

Being confined with two others in a 2m-diameter pressure sphere for up to 19 hours was uncomfortable but well worth the thrill of seeing the deep ocean floor, which on my first encounter seemed like landing on the Moon

In 1991, the team’s discovery of PACMANUS was facilitated by bathymetric information generously provided by Prof Hitoshi Sakai (University of Tokyo) from a Japanese expedition he had just conducted.

In 1994 with the German vessel Sonne and a team led by Prof Peter Herzig (University of Freiberg), a TV-guided grab allowed simultaneous viewing and sampling of black smoker deposits at PACMANUS. This was crucial to justifying more surveys of the site by manned submersible. The dives were then made possible by taking advantage of an Australia-Japan science and technology agreement where CSIRO linked in to a Japanese-French joint program to deploy the 6 500 metre-capable Shinkai manned submersible at several PNG sites including PACMANUS. Dr Ray Binns was the first geologist to see PACMANUS close-up and recalled:

I’ll never forget my excitement when I saw my first ‘black smoker’ pumping clouds of fine particles into the seawater from a pinnacle of sulfide minerals. My shouts of glee were duly recorded, and were even played a few years later on BBC radio 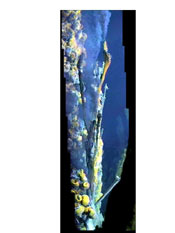 Active chimneylets at Satanic Mills – one of the sites at PACMANUS. The photo is taken in 1995 is of Ray Binn’s first active ‘smoker’, close-up, with lots of snails etc. The stem of the temperature probe on right is 1cm diameter. [Source: Ray Binns, CSIRO]

Finally in 2000, CSIRO proposed a project to the international Ocean Drilling Program aimed at understanding what was happening below the seafloor. Ray Binns was appointed Co-Chief Scientist (with Prof Fernando Barriga – University of Lisbon, Portugal) for a two-month leg of the drilling program involving 25 international scientists on board the drillship JOIDES Resolution, then the world’s largest research vessel. 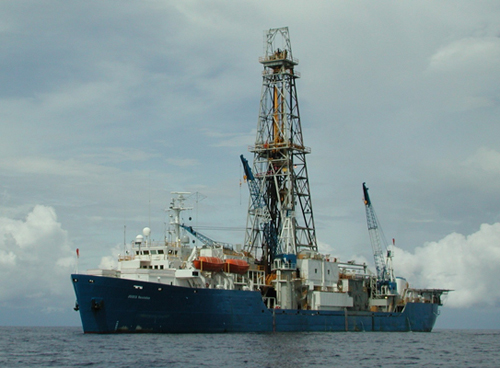 The program was well supported by the mineral exploration industry and attracted around $1.7m in external sponsorship. An additional $25 to 30 million of ship time was provided through highly competitive applications.

In 1993, following conclusive evidence that some of the black smoker deposits were rich in copper and gold, an entrepreneurial group in Sydney formed Nautilus Minerals Corporation Limited, a private exploration company, and applied to the PNG government for exploration rights. Approval and licenses from the PNG government were issued in 1997. Nautilus than negotiated a collaborative research program where CSIRO provided technical and scientific advice. Nautilus Minerals Inc. listed as a public company on the Toronto and London Stock Exchanges in 2006 and has raised over US$300 million capital.

A new source of metal resources

Once CSIRO commenced working with Nautilus, the research had two streams – understanding how ore bodies formed to help exploration on land and searching for and exploiting equivalent ore deposits on the deep ocean floor.

Acclaimed academically and supported by the mineral exploration industry, the CSIRO research program has provided significant new strategies and tactics to be used in the search for land-based ore bodies.

It has also spawned a major new industry – polymetallic sulphide mineral exploration and mining on the ocean floor, a new source of metal resources for the future.