Beth Fulton from CSIRO Marine and Atmospheric Research in Hobart has successfully combined a keen interest in the functioning of nature with a talent for mathematics. Beth has created models of marine systems – from the oceans and nutrients supporting primary production, up through fish and whales and other fauna, to the actions of humans who use the systems and the management bodies and political milieu that governs them.

The models she has helped develop, Atlantis and InVitro, are used both within Australia by the Australian Fisheries Management Authority and by governments around the world, to predict and give insight into the management of human interaction with the marine environment.

For her contributions to the field she was awarded the Science Minister’s Prize for Life Scientist of the Year in 2007.

The importance of the oceans

The oceans of Earth cover much of its surface and constitute the single largest habitat. They help provide nearly half of the oxygen we breathe, they support the water cycle and all major nutrient cycles and they influence climate. The oceans are the origin of life on Earth and have shaped culture and societies for millennia by providing food, medicines, trade and transport routes, artistic inspiration, religious components and recreational opportunities. Together this provides in Australia alone 2 million jobs and injects between $35 billion and $70 billion per annum into the Australian economy. Unfortunately, the most vulnerable coastal waters are also the locations of where human pressures on the oceans are greatest.

In this context how do governments find a balance between the conflicting issues of industrial use and development and the conservation of the oceans and coasts? In some cases the balance was not achieved resulting in epic failures such as the collapse of some of the world’s most famous fisheries, or the poisoning of wetlands or bays and the people living around them. Lessons have been learnt, however, and increasingly models, such as those developed by CSIRO, are providing insights and answers.

Modelling for management – Atlantis and InVitro

The first model Beth developed was based on her PhD work and is called Atlantis. It was named by a friend, another leading model developer Dr Villy Christensen from the Fisheries Centre, Aquatic Ecosystems Research Laboratory, University of British Columbia, Vancouver, BC. The name is inspired by the mix of the idea of a mythical oceanic location and the utopia named by Francis Bacon. Atlantis uses the traditional maths of Newton to build a deterministic version of the world, which can be run repeatedly in varying ways to build up a picture of how the future might look under different management ideas; or how environmental or climate scenarios may play out.

An example Atlantis model map (for southern Australia), the polygons represent the spatial units (large where geomorphology and physical properties change slowly over large areas and small where these properties change rapidly). These polygons are defined based on the geology, bathymetry, temperature, pH, salinity, currents and flora and fauna. Depth layers through the water column are defined in the same way. [Photo: CSIRO]

While Atlantis is based on classical mathematics, the other model, InVitro, that Beth has built with her team (in particular Randall Gray, Rich Little and Roger Scott), has more in common with the orcs in ‘Lord of the Rings’ or first person action-based computer games. In InVitro the marine environment is built from ‘agents’ where an agent represents anything from a water current, a patch of plankton, a coral bommie, a school of fish, a whale, a fisherman, a ship’s captain, a tourist, a regulator, a scientist (collecting data on the system), a political lobbyist, a gas platform worker or any other ‘actor’ in the marine system. With InVitro the world is never exactly the same twice over and it must be run many times on a cluster of machines to build up an image of the implications of all the trade-offs that happen between the different sectors using the marine environment. By focusing in different ways on the representation of the marine environment the two models, Atlantis and InVitro compliment each other and give deep insights into how to deal with the practical implications and impediments to sustainable management of marine resources.

Building such complex models relies on enormous support, however, as Beth comments:

We need to talk to the people who’ve spent their lives studying the different bits of the system – currents, climate, plankton, fish, sharks, whales, fisherman, local shop keepers, managers, the whole kit and kaboodle. We spend months getting the thing going and making sure it works like the real thing, we try to make it as accurate as possible.

This effort can pay off tremendously however. The models are not only being used to give strategic guidance on management, but are also revealing new aspects of how marine systems function. Perhaps the most important lesson according to Beth is:

that nothing is simple. Ecosystems bounce around like a ball in a squash court, even without human interference. This means it’s critical that we make decisions that work. If you get marine management wrong it’s easy to destroy things and end up with a pea green soup. This is where the models can make key contributions; showing how to balance sensible development and resource use with the protection and conservation of biodiversity and the functioning marine ecosystems.

The key to why these models help find the balance is that they give equal attention to the biophysical and human components of the marine system. The first in the world to do this, they were also the first models used to assess a whole-of-fishery management plan from an ecosystem perspective. These achievements were in part why Atlantis is beginning to be applied so widely (see global map) and why it was rated best in the world for strategic evaluation of marine management issues in a 2007 Food and Agriculture Organization (FAO) report that reviewed the world’s leading 20 ecosystem modelling platforms. 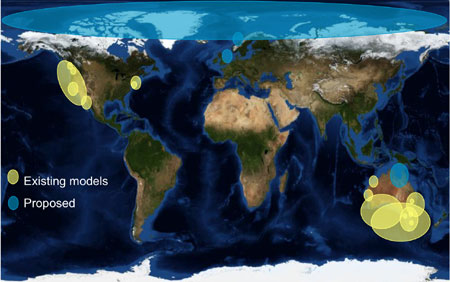 CSIRO’s work is rapidly being adopted in management and climate studies in Australia and internationally. Beth Fulton has established collaborations with researchers in the USA, Canada, Mexico, South Africa, UK and Norway; and has been asked to help members of the North Pacific Marine Science Organization explore different management approaches in the region. She has also been invited to attend numerous international meetings and scientific committees, and to attend an FAO meeting to set guidelines in best practice for ecosystem models.

Interest in her work from the US-based Gordon and Betty Moore Foundation and the David and Lucile Packard Foundation led to their investing in Atlantis development, which will see a new version of the model (that can address far more questions while also being easier to use) released in 2010.

Her contributions to the fields of ecosystem modelling and natural resource management also saw her receive the 2007 Science Minister’s Prize for Life Scientist of the Year (part of the Australian Prime Minister’s Science Prizes).