The SIROFLOC process is a unique method of water treatment developed by CSIRO. It removes colour and turbidity from surface and groundwaters by the use of recyclable magnetic powders (magnetite). Clarification involves the magnetisation of the particulate matter, which aggregates and settles rapidly, so the clarifier is much smaller than in the conventional plant. There is no filter and the clarifying agent can be re-used. The advantages of this Australian invention over a full-scale conventional plant are lesser capital cost, low head loss across the plant, and much less sludge for disposal.

In the late 1970s, CSIRO researchers at the Division of Chemical Technology invented a new process for the treatment of water for potable supply. The processes of coagulation and flocculation induced by the addition of metal salts had formed the standard approach to potable water treatment for most of the 20th century. There are even records which suggest that the Romans used the coagulating power of ‘aluminous earths’ to clarify their water supplies.

The CSIRO invention, called SIROFLOC, was based on the chemical and magnetic properties of very fine particles of magnetite, a magnetic form of iron oxide. The researchers found that cleaning the magnetite particles with a dilute solution of caustic soda changed the electric charge characteristics on the magnetite surface thus allowing it to interact with negatively charged colloidal particles in the raw water. During the late 1970s, this phenomenon was developed into a very rapid process for water clarification, where the magnetic properties of the fine magnetite particles allowed for their rapid removal and recycling.

The process was successfully commercialised in the early 1980s with the construction and operation of a full scale demonstration plant at Mirrabooka in Perth. Further development and commercialisation in partnership with Davy McKee Pacific Pty Ltd and the Water Corporation of Western Australia resulted in the first commercial SIROFLOC plant being installed in Bell Bay, Tasmania in 1983 which was still in operation 25 years after its commissioning. Since that time, SIROFLOC plants have been installed and successfully operated in England, Ireland, New Zealand and Taiwan.

The process has also been successfully applied to the treatment of raw sewage, where its ability to rapidly remove suspended solids and colloidal particles makes it an attractive treatment option in situations of limited land availability. At the opening of the first large-scale SIROFLOC sewage treatment plant at Malabar in 1993, Sydney sewage was cleaned up in fifteen minutes. The plant, a joint venture by the Sydney Water Board, CSIRO, and Davy John Brown Pty Ltd, removed 85% of suspended solids and 90% of oils and greases. Conventional plants would take over 10 hours to achieve the same results. At the official opening of the Malabar facility Dr John Stocker, CSIRO’s Chief Executive, said:

The SIROFLOC process for sewage treatment has really come of age. The high level of purification in such a short time was beyond everyone’s expectations. The SIROFLOC process not only protects the environment, but also supports Australian industry and has great export potential.

Without the investment and foresight of the Sydney Water Board, the engineering expertise of Davy John Brown, and CSIRO waste water research, SIROFLOC would not have progressed to this stage in such a relatively short time.

The plant is extremely compact, making it suitable for cities where urban space is a problem. SIROFLOC plants will suit cities in Japan, Korea, Taiwan and Europe, as well as Australia. SIROFLOC sewage plants are a cost effective way to upgrade existing plants, and as stand-by plants to process peak sewage loads. The Sydney Water Board and CSIRO invested $4.5 million each to research and develop the plant, with Davy John Brown providing the engineering and construction expertise. Davy John Brown is worldwide licensee for the SIROFLOC process.

The SIROFLOC technology was recognised throughout the water industry as a major innovation in water treatment technology. It is in use in Britain, parts of the Middle East and South-East Asia and has spawned the development of a number of similar technologies in Europe. 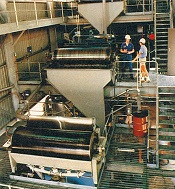