Graham Skyring received a Bachelor of Science (Microbiology and Biochemistry) with First-Class Honours in 1956 and a Doctor of Philosophy in 1961 from the University of Queensland.

He spent around 12 years teaching microbiology at university, then went to work at the Canada Department of Agriculture in Ottawa in 1965 to conduct research into the microbiology of the rhizosphere.

He returned to Australia in 1970 to join CSIRO as a research scientist in the Baas-Becking Geobiological Research Laboratory, Bureau of Mineral Resources (now Geosciences Australia) in Canberra. The biology and dynamics of microbial processes in aquatic sediments and coastal waterways became the focus of his research from around 1972.

He was a visiting Professor of Microbiology in the Department of Microbiology, University of Georgia (USA) in 1977 and joined the CSIRO Division of Water Resources in 1987.

After retiring from CSIRO in 1994, he participated in the planning of several environmental studies of Australian coastal and inland waterways and data interpretation.

He has authored over 100 publications in scientific journals, book chapters, and special publications.

Graham was a co-recipient of the CSIRO Chairman’s 1996 Gold Medal Award for management of the Port Phillip Bay Environmental Study (1991-96) and also a co-recipient with Dr James Ferguson (Geoscience Australia) of the AB Edwards Medal for Economic Geology, 1996. 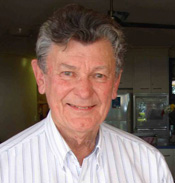