Soil organic carbon is a complex and varied mixture of materials and makes up a small but vital part of all soils.

The Soil Carbon Research Program (SCaRP) was a nationally coordinated program of soil carbon research bringing together researchers from the CSIRO, universities and state government agencies.  Funding was provided by the Australian Government’s Climate Change Research Program as well as the Grains Research and Development Corporation (GRDC).  The project commenced in April 2009 and concluded in June 2012 and coordinated 13 soil carbon research projects that together establish a strong science basis for soil carbon measurement and accounting and for soil carbon enhancement (sequestration) opportunities.

The SCaRP has been the largest and most extensive soil sampling and analysis program undertaken in Australia to measure stocks of soil carbon.  More than 20,000 samples were taken from a wide range of soil types and farming operations across more than 4000 different locations in selected farming regions. 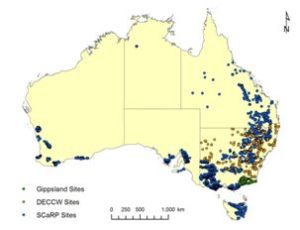 The Program was established as part of the Australian Government’s Climate Change Research Program within the Australia’s Farming Future initiative. The Department of Agriculture, Fisheries and Forestry and the Grains Research and Development Corporation funded the Program with in-kind contributions from project partners

Additional information on this project:

Previous post:
Computational Informatics and Digital Productivity
Coming up next:
A – New Products, Processes and Systems