The infamous story of this iconic outlaw has been debated and discussed for over a century, yet some mysteries still remain about Ned Kelly and the Kelly Gang. Now, a comprehensive book from CSIRO Publishing, Ned Kelly: Under the Microscope, will provide definitive answers to the mysteries of Ned Kelly’s life and death, using science.

“His remains have revealed many answers to long-held debates about him, including where he was buried, whether a post-mortem was conducted on him, and what became of his skull.”

Editor of Ned Kelly: Under the Microscope, Craig Cormick, gathered contributions from over 30 experts to guide readers through historical documents as well as complex science, addressing many of the myths that have arisen around this Australian folk hero.

“His remains have revealed many answers to long-held debates about him, including where he was buried, whether a post-mortem was conducted on him, and what became of his skull,” Mr Cormick said.

With chapters on anthropology, DNA studies, metallurgical analysis of the gang’s armour, and archaeological digs at Pentridge Prison and Glenrowan, Ned Kelly: Under the Microscope addresses a wide range of scientific research relating to Ned Kelly and his gang, and what it has revealed.

What happened to Ned’s head?

Ned Kelly was hanged at Old Melbourne Gaol on 11 November 1880, and his body buried in a grave there. Many stories emerged of his skull being separated and used as a paperweight or trophy, but it was eventually put on display at the museum of the Old Melbourne Gaol, until it was stolen in 1978.

Has Ned’s skull been found?

Ned’s skull was eventually returned by a Western Australian farmer, Thomas Baxter, in 2009. This skull, which became known as the ‘Baxter Skull’ was the same one that had been on display at the Old Melbourne Gaol for many, many years. The skull was certainly very similar in shape to Ned’s (based on craniofacial superimposition of his death mask), but was shown by DNA examination not to be his. Ned Kelly’s skull has never been found.

So whose skull was it?

Circumstantial evidence pointed to the skull belonging to multiple murderer Frederick Deeming. But the only way to know for sure was to put forth a rare and complicated request to exhume the remains of Deeming’s brother, Thomas Bailey, to obtain a DNA sample. After due process it was discovered that the skull does not belong to Frederick Deeming. It does not belong to Ned Kelly. And so the mystery continues. 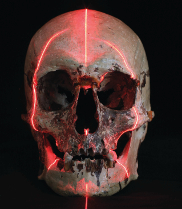 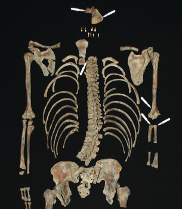 Previous post:
Smartphone app a life saver for heart attack patients
Coming up next:
Australia examines its strengths and sees its future in iManufacturing