Gilbert Brian Tucker was born in Ogmore Vale, South Wales, on 23 October 1930 to Thomas Ludwig Tucker and Edith Dodwell Pope. He was educated at Ogmore Grammar School, graduated from the University College of Aberystwyth in 1950 and went on to obtain a PhD from Imperial College, London, in 1954.

Brian Tucker began his professional career as a weather forecaster in the Royal Air Force, and when he applied for a scientific position at the UK Meteorological Office, the three-person Civil Service Board interview panel included the novelist CP Snow. Quizzed on his musical interests, he revealed his passion for the three B’s – Bach, Beethoven and Brahms.

Tucker worked as a research scientist at the UK Meteorological Office from 1956 to 1965, and in May that year – accompanied by his wife, Marian, and young daughters Karen and Kim – he arrived in Melbourne to take up a position as head of the research and development division of the Australian Bureau of Meteorology. He lost little time in setting about recruiting staff to build research capacity to underpin the application of the emerging technologies of satellites, computers and numerical modelling.

In 1946, CSIRO had established a Meteorological Physics Section (later, Division) under Dr Bill Priestley, and in 1967 a joint bureau-CSIRO Commonwealth Meteorology Research Centre was established, with Tucker transferred from the bureau to CSIRO to serve as its Officer-in-Charge. Under his forthright and inspiring leadership from 1969 to 1973, the centre blossomed as an independent research organisation bridging the research and the operational responsibilities of the bureau.

He was appointed Chief of the CSIRO Division of Atmospheric Physics at Aspendale in 1973 (in 1981 it was renamed Atmospheric Research). In this role he built on the legacy of his predecessor, Bill Priestley, in leading world research programs in micrometeorology, cloud radiation, atmospheric chemistry, dynamic climatology, regional meteorology and climate change impact assessment. He recruited and encouraged scientists with specialised skills and knowledge in subjects that were outside mainstream meteorology in Australia at the time. And, he strongly supported the development of the first Australian computer model of global climate for the study of climate change.

He established an external advisory committee to assist in the strategic planning of divisional activities to reflect wider community perspectives on needs, something that is common today but innovative at that time. Throughout his 28 years in senior positions, Brian Tucker reshaped the Australian meteorological research agenda and ensured that it was effectively integrated with the global effort. He was an early and active participant in the design of several of the major global research initiatives, serving on a range of senior steering committees.

He led the CSIRO’s scientific support for the developing national response to the threat of human-induced climate change, and remained forceful in his view that the science must be rigorous and the uncertainties should not be underestimated. In 1981, long before ‘greenhouse’ and ‘climate change’ had become household terms, he wrote the Australian Academy of Science’s influential monograph The CO2-Climate Connection: A Global Problem from an Australian Perspective.

Brian Tucker was a strong but hands-off leader and a much-admired mentor of younger staff. He inspired loyalty among professional colleagues but was not averse to vigorous debate on matters of science, policy or administration.

For a number of years after he retired from CSIRO in 1992, he served as a Senior Fellow at the Institute of Public Affairs in Melbourne.

His interests away from work ranged widely. He loved rugby, bushwalking and opera. Later, he took up flying, including aerobatics, and on occasions flew himself between cities to attend CSIRO senior management meetings. He and his wife Marian experienced the Australian landscape as few others have, flying together over much of the continent, often at low altitude. 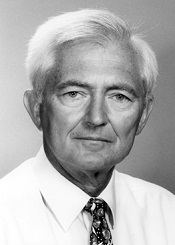