Ronald Harry Wharton was born on 14 April 1923 in the small village of Arding, near Armidale in northern New South Wales. His father, William Frank Wharton, was the teacher in the one-teacher school at Arding, where Harry spent his early childhood days. In 1933, the family moved to Dunoon, near Lismore in the Northern Rivers District of New South Wales and he attended the Lismore High School until 1939. These were happy days, spent mainly in the bush – walking, fishing, swimming, shooting and cycling – with his four brothers and sister. It was probably at this time that he began his lifelong interest and enthusiasm for sport, especially cricket. Indeed, to play cricket where he lived, one had to be keen, because first one had to clear the land to make a pitch.

When the Second World War started Harry was attending the New England University College in Armidale as a sponsored student. The college was still in its infancy, with fewer than 200 students. He is remembered as an outstanding student in the Faculty of Science, president of the Students’ Association and, as it was to be throughout his career, also remembered for particular activities, not necessarily related to his studies or his work. For example, he is remembered at Armidale also for the establishment of the first college shop, located initially in a cupboard in the Student Common Room.

It was probably at the New England College that Harry became interested in zoology, another lifelong interest no doubt engendered in the first place by his teachers, especially Dr HF Consett Davis, with whom he studied zoology in the first year. Up to this time he had not appeared to show any particular interest in this direction, but he was immediately successful, gaining a High Distinction and the Slade Prize in practical zoology. When Dr Consett Davis joined the Armed Services, Harry’s zoology teacher was Mrs Margaret Spencer (nee Cumpston) and it is probably due to her influence that Harry became an entomologist. He became so interested that he decided to take an honours course in entomology.

As this course was not available at the New England College, he transferred early in 1943 to the Sydney campus of the University of Sydney to undertake an honours course in entomology in the Zoology Department. Here he came under the influence of Mr David J Lee, later associate professor in the School of Public Health and Tropical Medicine, but at the time a Commonwealth Research Fellow.

His work for his honours degree as outlined by David Lee comprised:

He graduated with First-Class Honours at the end of 1943. By all accounts, Harry’s years as a student were very happy. This was especially true in Armidale where the small close-knit group of students and staff in the old mansion ‘Booloominbah’ (which later formed the nucleus of the University of New England) maintained their friendships for many years. At Sydney, he and Murray Wallace (MMH Wallace of the CSIRO Division of Entomology in Canberra) worked together in an old building, separated from the main Zoology Department in Science Road. The laboratory had a door at each end and a set of three cupboards in the middle. Harry and Murray became very expert at throwing dissecting needles over the cupboards and into the doors. There was also plenty of field work and when they were not on the roster for air-raid watch on the roof of the zoology building, the summer evenings were spent collecting mosquitoes with David Lee in the bush at Narrabeen. Lunch hours were spent mainly in the Union playing billiards.

After graduation Harry joined the Royal Australian Air Force and served in a malaria control unit. He undertook a short course on mosquito control given in the Department of Entomology at the University of Queensland by Mr F Athol Perkins and it was here that he first heard about DDT. He was posted to Darwin, then Milne Bay, New Guinea, and later to Morotai Island in the Moluccas. He had attained the rank of flying officer on discharge in 1945.

At the Institute for Medical Research at Kuala Lumpur (1948-63)

In June 1948, Harry entered the British Colonial Service, taking up an appointment as entomologist at the Institute for Medical Research (IMR) at Kuala Lumpur in the Federated Malay States. He was put in charge of a field laboratory in a rubber plantation at Tampin, Negri Sembilan, Malaya, which was set up for the purpose of conducting field trials on the effectiveness of DDT and BHC as residual insecticides for the control of malaria.

He spent his first leave (1952) in the United Kingdom continuing his studies in collaboration with Dr JR Busvine, at the Entomology Department of the London School of Hygiene and Tropical Medicine. His observations had shown that marked variation in susceptibility in insecticides was manifested by different species of mosquitoes and that these differences were related to factors such as innate susceptibility and behavioural characteristics influencing frequency and duration of contact. For these observations and experiments he was awarded an MSc by the University of Sydney. The degree was awarded in 1958 and his thesis was entitled ‘The use of residual insecticides in Malaya, with supporting papers on the systematics of Australian Culicidae and Simuliidae‘.

He returned from England to Malaya in 1953 to continue his research. These were the days when the communist insurgency was at its height and both Tampin and Kuantan were hotbeds of communist activities. Despite this, Harry did his field work taking long treks in the bush at considerable risk of ambush. In the early days, the people working at the Institute for Medical Research had been encouraged to volunteer in the local police activities, but later the director, Dr JW Field, forbade them to undertake such activities. Indeed, Harry told his brother Alan that the communists recognised him as a scientist and, approving of his mosquito-catching activities, let him alone.

He amassed a wealth of new information on the biology and behaviour of Malayan mosquitoes. His observations on feeding habits, nesting, and house-entering of vector mosquitoes have served as a basis for the control of both malaria and filariasis.

His work with his medical colleagues, especially JFB Edeson, T Wilson and ABG Laing, involving field observations and laboratory experiments on the one hand, with diagnosis, clinical observations, and chemotherapy on the other, will long be remembered as a classic group study in the highest tradition of tropical medicine.

The observations and studies undertaken in Malaya were collected in a monograph comprising Bulletin 11 of the IMR and entitled ‘The biology of Mansonia mosquitoes in relation to the transmission of filariasis in Malaya’. This report was submitted to the University of Malaya in Singapore as a part requirement for the degree of Doctor of Philosophy under the supervision of Professor AA Sandosham. The degree was awarded in 1960.

In the early 1960s, Harry Wharton and his colleagues became involved in studies on simian malaria. Their studies showed that although malaria was highly prevalent amongst the monkey population in the jungle, it was not a significant source of human infection, though it has been subsequently shown that man can be infected from monkeys. The fifteen years he spent in Malaya were a source of very considerable fulfilment.

On the basis of the research carried out at Kuantan, he had submitted proposals for the control of filariasis and these had been accepted by the director of medical services, a source of considerable satisfaction to Harry. He had been deeply absorbed in his studies for their own sake, but now he had the added satisfaction that the studies had a social impact; they had provided basic epidemiologial knowledge to be used for the control of a distressing disease. It is probably true to say that from his work was derived the basis of the control program against both malaria and filariasis subsequently undertaken by the Malaysian Government.

By 1963, he was recognised as a world authority on the vectors of malaria and filariasis in South-East Asia but working conditions in Malaya were changing. After Independence in 1957, the government had announced that British Colonial office personnel would gradually be replaced by Malayan staff, so that there occurred a gradual exodus of British officers from Malaya.

In 1963, he returned to Australia to take up an appointment at the CSIRO Veterinary Parasitology Laboratory, Yeerongpilly, Brisbane. His initial appointment was as Principal Research Officer in charge of research on cattle-tick in the Division of Entomology. He was reclassified to Senior Principal Research Scientist in 1965 and to Chief Research Scientist in 1968, when he also became Officer-in-Charge of all research activities of the Division of Entomology at the Long Pocket Laboratories.

His brief from Dr DF Waterhouse, Chief of the Division of Entomology, was to lead a group of research workers investigating the serious problem of cattle-tick infestation. This involved the development of a broad study involving, on the one hand, the ecological factors influencing tick survival and dispersal and, on the other, the physiological and biochemical factors influencing their susceptibility to insecticides. Up to this time, control of the cattle-tick had mainly depended upon a combination of ‘strategic ‘ dipping with acaricides and pasture ‘spelling’ (alternate grazing in separate paddocks, a control measure developed by Dr Paul Wilkinson at the Belmont Station of CSIRO). Such methods were however proving ineffective owing to development of acaricide resistance in the ticks, and to the long pasture spelling periods needed for effective control being not conducive to the most effective use of pastures.

As soon as he commenced his work at CSIRO, Harry’s attention was focused on two main aspects of tick control:

For both of these aspects of the tick investigation it was fundamental to develop first of all an accurate method of assessing tick populations on their hosts. The ensuing study of the engorgement of the cattle-tick on its host and its final detachment, when related to the assessment of tick numbers actually counted on the cattle, was directly applicable not only to field evaluation of acaricides, but also for comparing different control regimes, determining effects of ticks on cattle, and selecting and breeding for tick resistance.

The cattle-tick is distributed over a more or less defined area of Australia ranging from the Kimberleys in Western Australia, following roughly the curved line of the annual 20 inch (508 mm) isohyet, extending across the Northern Territory and Queensland to Lismore in New South Wales. One of the first successes in the ensuing campaign of CSIRO was to show that, although the attempts to eradicate the tick from New South Wales in 1956-57 had failed, ticks could be eradicated from an isolated area, such as Magnetic Island, off the coast near Townsville, in spite of the presence of native fauna. Over the next 15 years there followed a series of publications by Wharton and his colleagues, especially WJ Roulston, BF Stone, RW Sutherst and KBW Utech, which can mainly be classed into two groups: 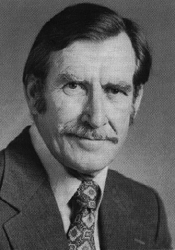