Over the past 20 years, CSIRO has developed High Temperature Superconducting (HTS) SQUID (Superconducting Quantum Interference Device) sensor systems for TEM (Transient Electro-Magnetic) prospecting. The TEM method is one of many mineral exploration techniques and is widely used for the detection and delineation of highly conducting ore bodies such as nickel sulphides, silver and gold.

A square loop of wire about 100 x 100 m2 is placed on the ground and when current is pulsed through it, eddy currents are induced in any electrically-conducting materials under the soil. A suitably-located magnetic receiver detects the growth and decay of these eddy currents over a period of time. The recorded time signatures of the decaying magnetic fields are then analysed to determine the presence of unseen deep magnetic anomalies. A critical breakthrough was achieved with LANDTEM in developing a magnetic receiver known as a Superconducting Quantum Interference Device (SQUID), which enabled the decaying fields to be recorded and analysed on much longer time-scales than was possible with previously-existing equipment. This ability to analyse the decay signals at longer durations led to the possibility of detecting mineral bodies at greater depths, and also enabled some degree of penetration through overlying conductive layers.

Initially this work was done in collaboration with BHP Pty Ltd, now BHP Billiton, and some early successes were achieved. In 2000 the radio frequency (rf) SQUID sensor was used to delineate targets at Falconbridge Ltd’s Raglan, Quebec, mine site and CSIRO entered into a contract to build a ruggedised version of the SQUID sensor system for Falconbridge’s use under a rental agreement. Since September 2001, a number of CSIRO SQUID systems have been built and deployed over three continents. A local Australian firm, Outer-Rim Developments, has been licensed by CSIRO to manufacture the rf SQUID systems now called LANDTEM.

In the ‘traditional’ TEM methods, a primary current applied to a loop on the ground generates a magnetic field which induces eddy currents in underlying, conducting regions of the soil. These eddy currents generate transient magnetic fields, B, which in turn, induce transient secondary currents in a detecting coil located at a distance. When the primary current is switched off, the induced secondary current, by Faraday’s Law, is proportional to the time rate of change of the eddy currents; hence the ‘signal’ recovered from the secondary coil is proportional to dB/dt. By contrast, in the LANDTEM project, the signal detected by the SQUID is directly proportional to B, not dB/dt. This direct response, together with the SQUID’s inherently greater sensitivity, makes it easier to record eddy-current peculiarities at extended time intervals, indicating the presence of deep-lying ore bodies. It also facilitates the penetration of signals through overlying conductive layers.

The history of LANDTEM is therefore closely linked to the history of SQUID development, and grew especially from work done at CSIRO, on High-Temperature Superconductors (HTS) dating from 1987 onwards. When HTS materials were discovered in 1986, the possible applications envisaged for SQUIDs multiplied overnight. The first HTS SQUID in Australia was demonstrated by Ian Harvey, and subsequent improvements made over the next 10 years have been summarised by Graeme Sloggett et al. [see U.S. Patent Number 5,635,834] and by Cathy Foley et al. [see Superconducting devices and systems]. Early doubts about the feasibility of unskilled operators using liquid nitrogen and deploying relatively unproven equipment in field situations, were largely overcome by the ingenious adaptation of low-cost, ruggedized Dewar flasks as described by Keith Leslie and colleagues in 2008 [see LANDTEM publications]. Although the original principle of the SQUID as applied to magnetometry was conceived by AH Silver and JE Zimmerman in the 1960s [1967, Phys. Rev., 157: 317-341], its use was restricted for many years to the laboratory, due to the necessity of operating the original devices at liquid-helium temperatures. The development of LANDTEM has proved that cryogenic techniques can be successfully deployed in real-world field situations.

In the late 1980s, CSIRO developed an unbalanced magnetron sputtering process which was used to fabricate high quality a-b aligned c-axis oriented YBa2Cu3O7-x thin films on MgO. Although the preferred method to form Josephson junctions in HTS materials is to use bicrystal substrates, CSIRO opted to develop step-edge junctions on single-crystal MgO (001) substrates. These junctions had the advantages that they could be placed anywhere on a substrate, and they allowed control of the junction critical current over four orders of magnitude by variation of the step angle.

The basic geometry of a Josephson junction formed between two superconductors is illustrated in the following figure. 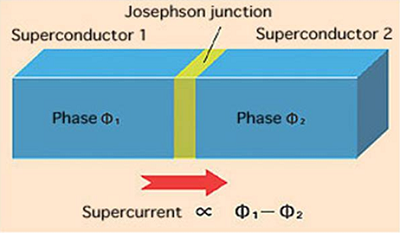 A Josephson junction is an insulating layer between two superconductors which is sufficiently thin (~1 nm) that a limited tunnelling of supercurrents can occur. [Source: CSIRO]

The state of each superconductor is determined by a quantum-mechanical wave-function with a phase parameter, Ï† , which is uniform throughout the superconductor. If the two pieces of superconductor are separated by a very thin barrier (~ 1 nm thick) their wave-functions can interact by quantum-mechanical tunnelling through the barrier. By this interaction, supercurrents can tunnel, without any voltage drop, across the barrier, provided the current does not exceed a value called the critical current. This value can range from a few micro-amps to several milli-amps depending on temperature, and other parameters. The dependence of critical current on temperature is illustrated in the figure below for a particular HTS junction. 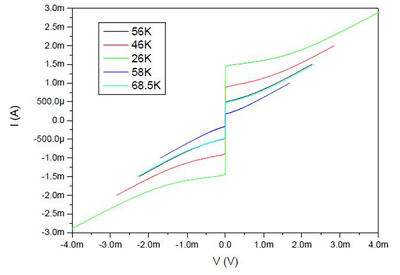 When a Josephson junction is inserted into a superconducting ring, the structure displays the unique property of Superconducting Quantum Interference. In this configuration, illustrated in the following figure, the critical current of the Josephson junction undergoes a periodic modulation as a function of magnetic field threading the ring. The period of the field corresponds to a change of one magnetic flux quantum in the ring, 2 x 10^-15^ Wb. The sensitivity of the SQUID as a magnetometer depends primarily on designing an electronic read-out which can resolve flux changes in the order of 10^-21^ Wb. In the case of LANDTEM, this was accomplished by means of a radio-frequency technique. 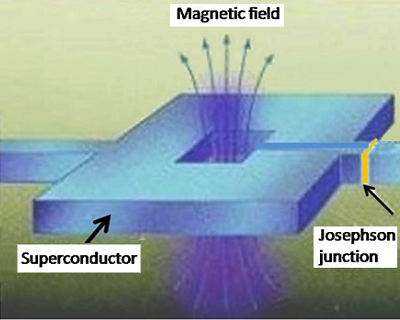 CSIRO commenced the development of HTS SQUID sensors for TEM application in 1991. Work at first was directed towards radio-frequency (rf) SQUIDs for the practical reasons that:

In 1993, a single axis, CSIRO SQUID sensor was successfully deployed in a ground-based TEM trial over the BHP-Billiton Cannington silver deposit. CSIRO continued to work with BHP-Billiton on the trial deployment of airborne TEM SQUID sensors up until late 1997.

Following BHP’s withdrawal from further development, CSIRO has built systems in collaboration with Falconbridge, a Canadian mining company. Falconbridge has being using the systems for 28 months of survey over hundreds of line kilometres over their Raglan prospect. After an approach from Falconbridge in 1999, CSIRO agreed to provide SQUID sensors for a series of ground based TEM trials over Falconbridge’s Raglan mine deposits located in the sub-arctic regions of Quebec, Canada. Falconbridge wanted to test a true B-field detector over some of their ultra high quality, nickel sulphide.

Following displays of this system at four ASEG Conference Exhibitions, the Australian firm Outer Rim Development approached CSIRO and after negotiations, began manufacturing for sale the SQUID system called LANDTEM under license. The rf SQUID system is now manufactured by a small engineering company, to which CSIRO supplies the rf SQUIDs under contract. Currently five systems have been manufactured and are in use in Australia, Canada and the USA.

This technology transfer required persistence and ongoing support from a sister division in CSIRO, Division of Exploration and Mining. It also required the group to become involved in the Australian Geophysics community to gain acceptance of a liquid nitrogen cooled system in field applications.

The mineral exploration industry has taken a long time to adjust to these changes even when the benefits are very large. Although competing technologies such as flux gates have sometimes obscured the usefulness of SQUID-based magnetometers for TEM, the SQUID in the meantime has travelled a long way from its experimental beginnings in a cryogenics laboratory towards the realisation of a fully-operational commercial implementation in the geo-exploration field.

In 2007, Keith Leslie, Cathy Foley and colleagues were awarded a CSIRO Medal for Research Achievement for their development of the LANDTEM system for minerals exploration which was described as a world’s first scientific and technical outcome. In 2009 Cathy Foley was the winner of the Telstra National and NSW Business Women of the Year ‘ Innovation.

Previous post:
RV Investigator to arrive in Hobart tomorrow!
Coming up next:
Plastic on the coasts is ours

LANDTEM  ¢ in action in Canada connected to a Crone receiver. [Source: CSIRO]