Superconductivity – its contribution to the absolute volt

CSIRO supported a significant effort in cryogenics, beginning in the 1940s, within its National Standards Laboratory (NSL), later named the National Measurement Laboratory (NML). The existence of this well-established cryogenic expertise contributed, in 1970, to the successful measurement of the volt in terms of the fundamental constants e (electronic charge) and h (Planck’s Constant), by means of the ac Josephson effect. This achievement complemented the outcome of a longer-term, independent electrometer experiment at CSIRO, which led, in 1983, to an absolute measurement of the fundamental constant 2e/h with a precision of 3 parts in 107.

These CSIRO breakthroughs, confirmed by Josephson-volt experiments in standards institutes around the world, made a vital contribution to a revised definition of 2e/h that was internationally adopted in 1990 ‘ confirming the place of Australian metrology at that time amongst the top two or three electrical-standards laboratories in the world.

The origins of the CSIRO work in superconductivity can be traced back to an Australian Federal Government Cabinet decision, in 1938, to set up a National Standards Laboratory, and to appoint as Officers in Charge: Norman Esserman (Metrology), George Briggs (Physics), and David Myers (Electrotechnology). These men, together with 5 or 6 later appointees, went to the National Physical Laboratory, Teddington, UK, in 1939, to gain relevant experience.

The 2nd World War intervened, but after 1946 Briggs was probably instrumental in setting up a cryogenics facility in Sydney, drawing on his experience at Cambridge ‘ where Kapitsa developed an expansion engine helium liquefier in the early 1930s, and subsequently in New York ‘ when Sam Collins and Howard MacMahon (from MIT) co-operated with Arthur D Little Inc to produce the first commercial â€œCollinsâ€ liquefier.

Back at the National Standards Laboratory (NSL) of CSIR, then situated at Sydney University, Alan Harper and Ron (WRG) Kemp took up the challenge to make a copy of the Collins liquefier, with the help of working drawings kindly donated by Collins and MacMahon.

Three Sydney graduates, Guy White, Paul Klemens and John Rayne were sent on CSIRO overseas studentships to gain relevant experience at Oxford, UK, and Chicago, USA. White returned in 1950, and when Kemp and Bill Smythe succeeded in producing the first liquid helium in the Southern Hemisphere, White initiated a research program concentrating on the thermal properties of gold, silver and copper at temperatures between liquid helium and liquid oxygen, i.e., 2K to 100K. Klemens joined the group in 1953.

The cryogenics research initiated by Guy White and colleagues was carried out in what was then the Physics Division of NSL (under the overall direction of Ron Giovanelli). CSIRO’s electrical metrology, including the maintenance of the standards of time, frequency, voltage and resistance, was directed by FJ Lehany, in the Division of Applied Physics.

In electrical engineering there is a constant need to check the values of the standards used to maintain the basic units of electrical measurements ‘ the volt and the ohm. Millions of dollars’ worth of electrical equipment is made in Australia every year. If each manufacturer used even a slightly different value for the volt or the ohm enormous confusion and huge financial losses would follow. On a more fundamental level, the International System (SI) of physical units depends on the continuous observation and re-evaluation of the methods used in the realization and inter-comparison of the working standards as they evolve through new technologies.

A stimulus for the development of a new voltage standard came in 1967, when CSIRO’s AM Thompson saw a paper by a group at the University of Pennsylvania (Parker et al., 1967, Physical Review Letters, 18, 287) which stated:

â€œUsing the ac Josephson effect, we have determined that 2e/h = 483.5912 ±0.0030 MHz/microvolt. The implications of this measurement for quantum electrodynamics are discussed as well as its effect on our knowledge of the fundamental physical constants.â€

Thompson, who was well advanced at NSL in establishing the calculable capacitor as an absolute method for realizing the Farad and the Ohm, brought it to the attention of Ian K Harvey, who was working with Len Hibbard and John Macfarlane on the construction of a hydrogen maser frequency standard. Harvey grasped the significance of the Pennsylvania group’s paper, which showed that Josephson’s ac effect could in principle, provide a quantum-mechanical route for the definition of a voltage V in terms of the frequency f of an electromagnetic oscillation, depending only on the fundamental constants h (Planck’s constant) and e (electronic charge) where f=(2e/h)V. Because a frequency could be measured, with reference to an atomic frequency standard such as the hydrogen maser, to an accuracy of a few parts in 1010, there was an obvious incentive to embark on this new route for the realization of the volt. This would reinforce a trend towards realization of the SI Base Units in terms of the fundamental constants.

CSIRO takes up the challenge

The adoption of cryogenic technology and superconductivity was a major revolution in the electrical standards section of the National Standards Laboratory (NSL). Ian Harvey and John Macfarlane, neither having any previous cryogenics experience, spoke to Guy White about the breakthrough in fundamental metrology that was foreshadowed by Josephson’s theoretical paper and the Pennsylvania work. Within a few days, with help initially from John Birch who gave Harvey and Macfarlane a beginner’s crash course in practical cryogenics, they had a working cryostat and enough liquid helium to get started. Not many weeks later, following an overseas trip, Harvey devised and constructed a simple point-contact Josephson junction from niobium (Nb) wire, and mounted it inside a helium-cooled X-band waveguide. A later prototype point-contact junction is sketched in the following figure.

With microwave radiation applied from a borrowed Klystron source, the predicted Josephson/Shapiro constant-voltage steps were clearly displayed on the screen of an oscilloscope, (see Figure below). John Macfarlane later prepared some thin-film PbIn and Sn tunnel junctions, which were shown to agree with the Nb point-contact result within the available precision of 2 in 107, and subsequently demonstrated the equivalence of two point-contact junctions to 2 in 109. Present (2011) versions of the Josephson voltage standard can be equipped with commercially-available integrated arrays consisting of 10,000 or more Josephson junctions which can deliver outputs at the 1-volt or 10-volt level.

Current-voltage characteristics of our point-contact Nb Josephson junction (a) without and (b) with applied 9.8 GHz microwave radiation. [Source: JC Macfarlane]

For the work to be internationally accepted, the reliability of the existing working standard of voltage had to be ascertained. The immediate priority then at NSL, was to deploy the ac Josephson effect in a long-term, week-by-week monitoring of the in-house voltage working standard, which consisted of a group of electrochemical cells which had been carefully maintained at 20.00oC in a constant-temperature oil bath over several decades. In fact some of the cells were part of the original 1938 bequest from National Physical Laboratory, Teddington, UK. This monitoring routine was carried out by Ian Harvey, Bob Frenkel and John Macfarlane with technical assistance from Norm Ancher, Harry Collins and others.

A major effort was then required to compare the voltage output of about 1 millivolt from the single Josephson junction, at the temperature of liquid helium, with the standard cell voltage of 1.018â€¦ volts at room temperature. With traceability of the CSIRO resistors to the Thompson-Lampard absolute resistance standard, and by means of regular calibrations using a series-parallel â€œHamonâ€ resistive ratio divider, the 1:1000 voltage ratio was reliably maintained with a precision of 2 in 107 (see Finnegan TF, Denenstein A, Langenberg DN, 1970, ac-Josephson-Effect determination of e/h with sub-part-per-million accuracy Phys. Rev. Lett. 24: 738).

The later invention by Ian Harvey of the superconducting current comparator established a new principle in electrical metrology, based on the Meissner effect and the quantization of magnetic flux, and enabled a ratio of currents to be established to a few parts in 1010. The absolute value of 2e/h was at that time known to an accuracy of only several parts per million, and the challenge was opened for a series of 2e/h inter-comparisons, by several independent national laboratories, to the highest possible precision. The US National Bureau of Standards (NBS), the UK’s National Physical Laboratory (NPL) and NSL each published their determinations within a few months of each other in 1970. The quoted NSL precision (0.1 ppm) was state-of-the-art at that time. The development of the cryogenic current comparator by Harvey improved the available precision to 0.02 ppm. A further reconciliation of international voltage standards took place following the Absolute Volt determination at NSL by Sloggett and Clothier (see below).

Shortly after the successful realization of the Josephson volt, all staff and equipment at NSL (by now re-named the National Measurement Laboratory (NML)), were re-located to a new, purpose-built laboratory complex in West Lindfield, some 20 km north of Sydney University. A major effort over a 6-month period was required to ensure the safe dismantling, transportation, and re-establishment of a vast array of complex, sensitive apparatus at its new destination.

In the case of the voltage standard, the crucial components were the standard cells and their constant-temperature bath, the 1000:1 resistive ratio divider, the liquid-helium cryostats, and various irreplaceable galvanometers. All due care was taken to avoid exposing the gear to shocks such as excessive vibration and extreme temperature changes. The CSIRO group were by now confident, however, that in a worst case scenario they could always re-establish the volt in terms of the atomic constants by means of the Josephson technique; a task which would have been impossible just a few years earlier. As John Macfarlane recalled:

‘After everything had settled down in the new, temperature-controlled, electro-magnetically-screened labs, in mid-1978 we resumed our weekly calibrations of the standard-cell group against the Josephson voltage. It became clear that, despite all the precautions, something had changed! The slow, uniform drift of about 0.04 microvolts per annum in the mean electromotive force (emf) of the group, which had been continuously monitored from the inception of the Josephson experiment in 1969, underwent an abrupt upward shift of about 1 microvolt.

A convincing explanation was never found, and after some months, the readings gradually resumed their original long-term trend line. Without the benefit of the Josephson experiment, and its intrinsic traceability to the fundamental constants, this excursion and eventual recovery in the voltage of traditionally-maintained standard cells would not have been reliably detected.’ 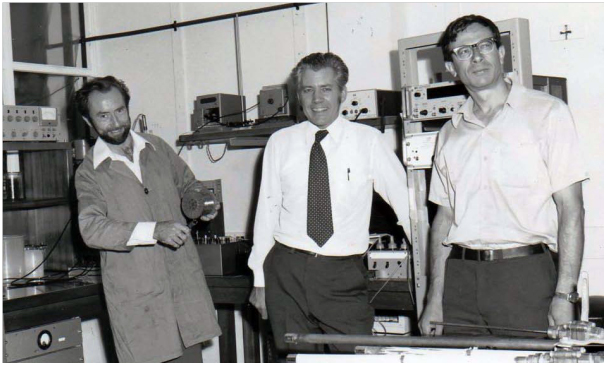 The absolute volt: an electrometer method

Since 1964, also at CSIRO, the quest for an absolute voltage standard by a more traditional route had been under way in the work of Keith Clothier, Graeme Sloggett and others. Essentially, the experiment set out to measure the electrostatic attraction exerted by a high-voltage electrode placed above the surface of a pool of mercury. An immensely difficult and multi-disciplinary experiment, it relied on state-of-the-art optical interferometry, measurements of the gravitational acceleration g, mercury- liquid densitometry, and vibration isolation, as well as high- precision electrical metrology. In 1983, this work finally yielded an absolute value for the volt in terms of 2e/h with a precision of 3 parts in 107. Moreover, the new value differed by a relatively enormous 8 parts in 106 from the then internationally-agreed figure. This determination, together with results from Josephson-volt experiments which by now had been set up and internationally verified in a number of standards institutes around the world, made a vital contribution to a revised definition of 2e/h which was internationally agreed upon in 1990.

Thus the contributions of many CSIRO scientists and technicians, working individually on several quite independent, highly challenging experiments over a period of decades, converged within a year or two to produce a world-class contribution to the knowledge of the fundamental physical constants. These contributions confirmed the place of Australian metrology at that time amongst the top 2 or 3 electrical-standards laboratories in the world.

Previous post:
Pests in paradise: saving Lord Howe Island from the ants
Coming up next:
DNA technology set to speed up species discovery