Advanced Scientific Computing (ASC) became the official name for the joined eScience and HPSC under CSIRO IM&T on 4th February 2008.  This acted on one of the recommendations of the 2007 Advanced Scientific Computing review.  Eight staff from HPSC and 3 from the CSIRO IM&T eScience team were the foundation members.  Alf Uhlherr was the founding Executive Manager eScience.
Systems available included the partnership systems (NCI, iVEC, etc), various cluster systems, the HPCCC SX-6/TX7 system, Datastore and SGI host cherax at Docklands.
A report from November 2010 on the implementation of the review contained:

Also:
Over the past three years the team has expanded to 34 staff, including three part-time. Of these, eight have commenced since September 2010.
Below is the organisation chart, showing widening of the structure to respond to growing and more diverse needs. 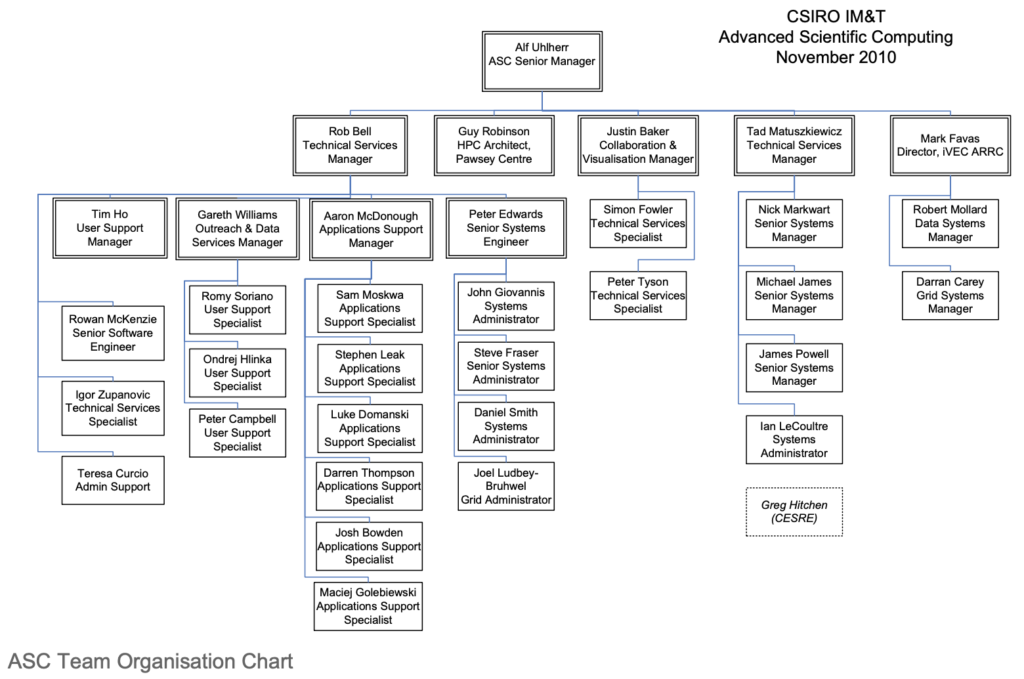 Staff were based at Docklands, Clayton, Canberra, Perth, Hobart and Geelong.

By 2010, a hybrid GPU cluster had been added in Canberra, and CSIRO had ceased using the HPCCC NEC SX-6/TX7 system.

An experimental Storage and Cloud service (stacc) was commenced by 2013, and formally launched in July 2014 as a supported service, named bowen (following a suggestion from Alf Uhlherr and myself) after E. G. (“Taffy”) Bowen, former Chief of CSIRO Radiophysics, and an early proponent of cloud seeding.

One of the outcomes of the 2007 review led to CSIRO forming a Transformational Capability Platform for Computational & Simulation Sciences (CSS-TCP).  This held a CSIRO CSS and eResearch Annual Conference and Workshop, which by 2014 could report it attracted 260 CSIRO attendees and 120 external attendees over four days.
See also the eResearch Collaboration Projects sidebar.

In October 2013 it was announced that ASC was to merge into a second branch of IM&T – Scientific Computing group, with sub-groups Infrastructure (Brian Davis) and Services (Alf Uhlherr).  The infrastructure group would manage the ASC systems and also CSIRO Corporate servers and storage.

In the year 2000, an unincorporated joint venture with key partners was established and named iVEC.

In 2009, as part of the Commonwealth Government’s Super Science initiative, iVEC secured $80 million in funding to establish a petascale supercomputing facility and house the computers under one roof, at the Australian Resources Research Centre in Perth.

In 2014, iVEC proudly adopted its new name, as the Pawsey Supercomputing Centre, in honour of the prominent Australian radio astronomer, Joseph Pawsey.

WA universities and CSIRO were the partners in iVEC and Pawsey, with CSIRO taking over management in about 2014.  The Pawsey Centre had a purpose-built building at ARRC, and acquired two Cray XC-30/XC-40 systems in 2013-14, one dedicated to radioastronomy data acquisition (galaxy), and one for general HPC (magnus).  It also acquired a clustered SGI system, driving a DMF-managed data store, using a SpectraLogic T-finity tape library with IBM TS series drives. 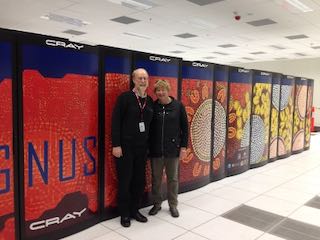