Alexander Thomas Dick (Alick to his friends), was born in Melbourne on 9 February 1911 and died in Adelaide on 3 July 1982.

He was the second son of John Laird Dick (born in Glasgow, Scotland in 1874) who came to Australia in 1888 with two older brothers. JL Dick settled in Victoria where he was employed in the Victorian civil service and married Florence Mary Smith (born in Victoria of English parents). They had four children of whom Alick was the second, having an elder brother, who also became a chemist, and two younger sisters.

Alick’s education began at South Yarra State School, Melbourne, from which he proceeded to Melbourne Church of England Grammar School where he reached matriculation standard in 1927. The subjects he studied included mathematics, chemistry and physics.

From 1928 to 1929 he attended an evening course at Melbourne Technical College, at the completion of which he obtained the Public Analyst Certificate. In 1930, he commenced a science course at the University of Melbourne, studying Chemistry, Physics, Botany, and Zoology in his first year; Chemistry (II), Biochemistry and Physiology, and Bacteriology in his second year; and Chemistry (III), Biochemistry and Physiology (II) and Bacteriology (II) in third year. He obtained honours in all subjects, his lowest position in the class lists being fourth.

In 1933, he joined the CSIR Animal Health Research Station, Townsville, as a Junior Research Officer. There he worked for five years with AW Turner (later FAA) on the investigation of contagious bovine pleuropneumonia. Those investigations were largely concerned with the biochemical and immunological properties of the causal organism and its metabolic requirements for growth in artificial media. The work resulted in the development of a vaccine that was largely instrumental in bringing this disease under control in Australia.

On his return to Melbourne, Dick was appointed Officer-in-Charge of the Chemical Pathology Section of the Division of Animal Health and Production based at the Parkville Laboratory under the direction of the then Chief of Division, LB Bull. For some years considerable sheep losses had been suffered in southern New South Wales and northern Victoria due to what came to be called ‘toxaemic jaundice’, and Bull was Chairman of a committee directing a co-operative investigation into this problem. Dick was immediately involved in work relevant to toxaemic jaundice and was co-author of A Preliminary Note on the Aetiology of Enzootic Jaundice, or ‘Yellows’ of Sheep in Australia with Albiston, Bull and Keast. It was concluded that enzootic jaundice was due to a disturbance of copper metabolism associated with high storage values for copper in the liver and a sudden mobilisation of copper into the blood stream; that is, the disease was, at bottom, chronic copper poisoning.

Dick’s involvement in this program was extensive and played a major part in unravelling the complex situation that was revealed. The story has been summarised briefly by Bull (Victorian Veterinary Proceedings, 1963-64) who wrote:

The CSIR Division had formed a Section of Chemical Pathology with Mr A.T. Dick in charge and thus prepared itself for an investigation which depended very much upon applied chemistry for success

The validity of that statement is made clear later in Bull’s review when he shows that they were concerned with three types of chronic copper poisoning in sheep, the first due to excess intake of copper usually from contaminated food or pasture, the second to liver damage produced most commonly by the consumption of plants containing pyrrolizidine alkaloids (caused, in the investigation in question, by the ingestion of Heliotropium europaeum), the third to mineral or inorganic imbalance resulting from a diet low in molybdenum and inorganic sulphate.

It is to this third category that Dick made his major scientific contribution. The discovery of the metabolic interrelation of molybdenum, copper and sulphate represented a significant contribution to knowledge and, to quote one authority, initiated a new era in trace element nutrition in which the significance of mineral interrelations has been highlighted in a dramatic way and stimulated a remarkably large series of similar types of study overseas

Dick and Bull reported in 1945 the first observations on the effects of molybdenum in the diet of ruminants in limiting the accumulation of copper in their tissues. Further observations by Dick indicated that there was a third factor involved which materially altered the control by molybdenum of copper accumulation, and this was identified as inorganic sulphate. He also showed that sulphate regulated molybdenum excretion in the urine and hence the level of molybdenum in circulating blood. The story was completed in what was Dick’s last publication which postulated that sulphate is reduced to hydrogen sulphide which reacts with molybdates to form thiomolybdates. These combine with copper to form insoluble copper thiomolybdates thereby limiting the absorption of dietary copper.

Other research interests included the role of the two alkaloids of the pyrrolizidine group, heliotrine and lasiocarpine of Heliotropium europaeum in toxaemic jaundice and the so-called Kimberley Horse Disease that occurred on the cattle stations of north Western Australia.

He was appointed Chief of the Division of Nutritional Biochemistry in 1965. This presented a situation different from that of the Parkville laboratory. His predecessor, Hedley Marston, had been an autocrat who had both generated and supervised the Divisional research programs on a day-to-day basis. Dick introduced a more democratic style of management and brought about a number of improvements in laboratory facilities including an increased ratio of technical to scientific staff. He saw himself as a ‘facilitator’ rather than a director. Nevertheless, as one of his staff wrote:

Dick’s somewhat rigid outlook did, however, lead to a critical assessment of Divisional programs and was a considerable benefit to the staff, encouraging them also to critically assess the directions and detailed procedures of their research projects. He did not approve of laissez-faire attitudes towards research and continually had in mind his perceived terms of reference for Divisional activities.

He formed research sections in the Division, each led by a senior scientist with a degree of autonomy and senior staff were involved in decisions on proposed research programs. Once a research proposal had been approved – often after exhaustive and lengthy debate – Dick did not interfere with its implementation.

Dick’s perception of the terms of reference of his Division led to increasing and better defined emphasis on particular biological mechanisms. These included the metabolic interrelations of vitamin B12 and folic acid in cobalt-deficient sheep, the role of copper in brain development in the foetal lamb, the role of micro-organisms in the fermentation process and their energetic efficiency, the synthesis of S-amino acids in the rumen, the degradation of pyrrolizidine alkaloids in the rumen and the involvement of tryptamine alkaloids in the chronic poisoning of sheep by Phalaris tuberosa.

During his period as Chief, Dick’s responsibilities were, of necessity, largely administrative and his opportunities for advancing his own research limited. He was, however, able to pursue his interests in the pyrrolizidine alkaloids and the interaction between molybdenum, sulphate and copper in the sheep; reference has already been made to his work on the conversion of molybdates to thiomolybdates with the consequent formation of insoluble copper thiomolybdates.

Towards the end of Dick’s tenure, the Executive of CSIRO approved a major change in the objectives of the Division, namely to move into the study of human nutritional problems, at the expense of existing programs on ruminant nutrition. This change in direction was in no sense a criticism of the previous activities of the Division. The CSIRO Executive had become convinced that the organisation should move into the field of human nutritional research and the preferred laboratory to undertake such investigations was the Division of Nutritional Biochemistry. Obviously the most appropriate time to bring about such a change was when a new Chief of Division was to be appointed. Dick was naturally concerned about this decision and particularly in respect of its possible effect on the future of his staff. He retired in February 1976 and did not undertake any further research.

Alick Dick was an active member of the Royal Australian Chemical Institute, being admitted Associate in 1938 and Fellow in 1952. During the period 1940-45 he was secretary for three years of the Institute’s Biochemical Group and Chairman for two years, and a member of the Victorian Branch Committee in 1946.

He was also involved in other professional societies, such as the Australian Society of Laboratory Technology, of which he was successively a member of Council, Vice-President and President and was elected honorary life member. Likewise he was a foundation member of the Victorian Society of Pathology and Experimental Medicine and became its President in 1958.

A full account of the life and achievements of Alexander Dick can be found by following the link in the Source details below. 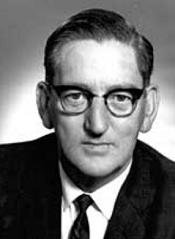