Arthur William Turner was born on 17 August 1900, in Melbourne. At the age of 14, he won a Junior Scholarship to proceed to secondary education, being placed third on the list in the State. He was offered a Free Place (similar to an entrance scholarship today) by Wesley and Scotch Colleges. However, he chose to go to Melbourne High School, believing that his parents could not possibly afford the unavoidable extra expenses that attendance at a Public School would entail. He suffered bouts of pleurisy and pneumonia during his time at Melbourne High School. Illness in his matriculation year so interfered with his studies and examination results that he missed out on a Senior Scholarship that would have allowed him to enter the medical course at the University of Melbourne. However, he was offered, and accepted, a ‘Nominated Scholarship’ to pursue the course for the Bachelor of Veterinary Science degree which had been established by the University in 1909.

Turner graduated BVSc in 1923 with honours and prizes for Parasitology, Pathology, Bacteriology, Veterinary Surgery, Veterinary Medicine and Veterinary Obstetrics. He joined the staff of the Department of Veterinary Science as a demonstrator while continuing his studies for the Master of Veterinary Science degree. He passed the examinations for this in 1924, but there is no evidence in the University records that he was admitted to the degree.

He was appointed a Walter and Eliza Hall Fellow at the University Veterinary School in 1924 and commenced research work with Harold E Albiston, under Professor HA Woodruff, on infectious necrotic hepatitis or black disease of sheep in the Veterinary Research Institute which was part of the University’s Department of Veterinary Science. Late in 1926, he was awarded a fellowship by the Rockefeller Foundation that took him to the Institut Pasteur, where he studied under Professor M Weinberg, a leading authority on anaerobic bacteria. In September 1927, he proceeded to the Cambridge Institute of Animal Pathology to further his research experience. This completed his overseas training, and in March 1928 he returned to Melbourne at the invitation of Sir David Rivett to join the infant Council for Scientific and Industrial Research (CSIR). He set up his laboratory in the Veterinary Research Institute where he had made his first studies of black disease in 1924.

For most of his scientific career, Turner worked with relatively small groups of scientists and technicians. He never sought to expand his department beyond the immediate scientific requirements needed to investigate the various problems for which he, as leader, had responsibility. He was named Officer-in-Charge of the CSIR Animal Health and Production Laboratory at Parkville and later Assistant Chief of Division, but he was over-shadowed by his Chief, Dr Lionel Bull, FAA.

Bull and Turner had respect for each other as scientists. Bull had designed and built the Parkville Laboratories as the headquarters of his Division, but he frequently issued instructions to various members of the staff without any prior consultation with the Officer-in-Charge. Bull was a dominant character, a leader who assumed control in nearly all his endeavours. Turner was more retiring widely read, and with a gentler approach to those with whom he worked. He often found it difficult to accept Bull’s direct dealings with the laboratory staff, and uneasiness existed in their relationships over their years together.

In 1938, he was made an Officer of the Order of the British Empire (OBE), in the Birthday honours for that year, by His Majesty the King, for outstanding services to Science and the Commonwealth. Initially he had some reservations about accepting this award because of his perception of the assistance of his colleagues. His mother, as well as his professional colleagues, encouraged him to accept the award. Characteristically, he left the ceremony with his OBE insignia in his pocket rather than around his neck.

He was in the first group of Fellows elected as the Foundation Fellows of the Academy of Science in 1954. Turner greatly valued this and all recognitions of his work, but he was always quick to acknowledge the debt he owed to his family, his teachers, his colleagues and those who had gone before.

He was elected to membership of the Wallaby Club of Victoria, which is a select club for men distinguished in science, the law and letters. He is also recorded as being a member of the Graduates’ Union, Melbourne University.

In l958, Turner received the Gilruth Prize of the Australian Veterinary Association, the highest honour his profession could confer on him. In his acceptance speech Turner was moved to reveal the debt he perceived he owed to others for his success. He said, inter alia:

… luck and good fortune have been kind to me; for I had the foresight to choose the right period to be born in, the right parents to stint themselves in order to educate me, the right wife to endure patiently and willingly what I now realise was my own selfish pursuit of happiness through study and research, the right teachers to inspire and guide me, and the right colleagues to help me. I have been fortunate in having been presented with problems which had been brought almost to solution by my predecessors.

Sir Isaac Newton, once said “If I have seen further, it is because I stood on the shoulders of giants” Gentlemen, I too have stood on the shoulders of giants – men like Sydney Dodd, Grahame Edgar and Harold Albiston in Australia, and innumerable others here and abroad, from whose shoulders I was able to gain that revealing glimpse ahead which brought some problems a little nearer to solution. I have been able to follow my bent in a way impossible for less fortunate colleagues and have been able to make of my research life a joyous adventure.

Arthur Turner was a distinguished research scientist. He was fluent in French, German and English and he had a good reading knowledge of Russian and Dutch as well as a love, and understanding, of classical Greek and Latin. He worked for nearly all his professional life in Melbourne, either in the University or in the CSIRO Division of Animal Health. He was loyal to his colleagues and quick to encourage the young men who came to work with him, either as graduate research assistants or as laboratory technicians fresh from secondary school. He was a highly respected member of the veterinary profession, an inspiration to many younger members who have followed him into research, and a benefactor of the livestock industries through his work on black disease of sheep and cattle and contagious bovine pleuropneumonia. 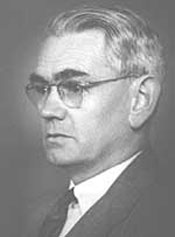