The discovery of the colony stimulating factors (CSFs) and their development for use on human cancer patients has been described as one of the great, if not the greatest, discovery of the Walter and Eliza Hall Institute for Medical Research (WEHI) in Melbourne. What is less well known is the critical role CSIRO played in that story. In a seven year collaboration with scientists at WEHI and the Ludwig Institute for Cancer Research (LICR), CSIRO’s Lindsay Sparrow purified sufficient granulocyte-macrophage colony stimulating factor (GM-CSF) for N-terminal amino acid sequence analysis. GM-CSF was the first of the CSFs to be described chemically.

The information enabled scientists at LICR to determine the complete sequence of this growth factor using recombinant DNA methodologies and to produce it in large quantities for future research. This research culminated in the clinical use of CSFs on cancer patients undergoing chemotherapy. The world market for CSFs in 2008 was in excess of US$4 billion.

The factors responsible for stimulating the growth of bone marrow cells in culture are called colony stimulating factors or CSFs. CSF research at the Walter & Eliza Hall Institute for Medical Research (WEHI) began in 1965 when Ray Bradley at the University of Melbourne observed that under certain conditions, bone marrow cells in agar culture could generate colonies. Bradley’s collaborator Don Metcalf from WEHI realised the potential of this phenomenon and ceased his studies on the biology of the thymus to begin his lifelong research of the factors responsible for blood cell growth and development. This research culminated in their purification, chemical characterisation and subsequent large scale production for clinical use on cancer patients.

One of the first patients to receive CSF treatment (in 1987) was world famous tenor JosÃ© Carreras who had been diagnosed with acute myelogenic leukeamia and was fighting for his life. Ten years later, in February 1997 while touring Australia, Carreras sang ‘Happy Birthday’ to Don Metcalf, for the pioneering discoveries which ultimately saved his life. 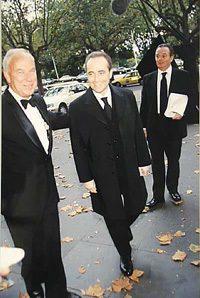 Don Metcalf and JosÃ© Carreras during his visit to Melbourne in 1997. [Courtesy of WEHI]

More than one colony stimulating factor

During the late 1960s Don Metcalf and colleagues showed that CSFs were present in serum and in urine, albeit at very low levels, and that the levels were higher in patients suffering infections. By the early 1970s they had established that there were at least four CSFs: M-CSF, GM-CSF, multi-CSF and G-CSF. The factors could be discriminated from each other using different assays combined with protein purification methodology.

Purifying the CSFs was an extremely difficult job given the minute quantities that were present in urine or biological samples. While purification for cell-culture assay purposes was one thing, obtaining enough material for chemical characterisation or experiments with live animals was another. As Don Metcalf explained in an interview with Max Blythe in 1998 for the Interviews with Australian Scientists series:

We now recognised that we could never extract enough native CSF out of the richest tissue source to inject into one mouse ‘ and to get enough material for one patient we would have had to work for 250 years. We had purified CSF, we had done elegant tissue culture experiments, but now we’re into logistics and were facing a big black hole.

The solution to this problem came with the cloning of the cDNAs for the CSFs and the ability to produce them by large scale fermentation using bacteria or yeast. The first success was with mouse GM-CSF. The breakthrough that made this development possible, was the partial amino acid sequence data from a mouse GM-CSF sample purified by CSIRO’s Lindsay Sparrow.

The purification was approximately 8 000-fold and the procedure involved affinity chromatography on lectin columns (GM-CSF is a glycoprotein), removal of terminal sialic acid residues by neuraminidase treatment, and ion-exchange chromatography followed by the relatively new methodology at that time of reverse phase high performance liquid chromatography (RP-HPLC).

The collaboration between CSIRO and WEHI ran from 1977 to 1984. WEHI came to CSIRO because CSIRO were building an automated amino acid sequencer with Pehr Edman and Geoff Begg from St Vincent’s Institute for Medical Research. Edman was the inventor of the cyclical Edman chemical degradation procedure for N-terminal amino acid sequencing and realised that the process could be automated. In 1967 Edman and Begg published a paper on the design of the first automated protein sequencer and in 1969 began a collaboration with the CSIRO Division of Protein Chemistry to build an instrument for each laboratory.

In the end the CSIRO/St Vincent’s instrument was not used as it did not have the sensitivity to deal with the 300 picomole quantity of GM-CSF available. Instead the sample was sent to the laboratory of Leroy Hood and Mike Hunkapiller at the Division of Biology, California Institute of Technology in the United States where there was a more sensitive gas phase sequencer. 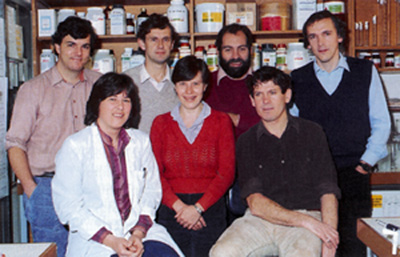 When the GM-CSF sample prepared by CSIRO was analysed, a single amino acid sequence could be read for 34 repetitive cycles with 31 residues unambiguously assigned. This sequence was used by Nick Gough and Ashley Dunn from the Ludwig Institute for Cancer Research in Parkville to synthesise oligonucleotide probes to detect two cDNA clones for mouse GM-CSF. The nucleotide sequence of these clones verified the N-terminal protein sequence assignments and allowed the complete amino acid sequence of GM-CSF to be deduced. It coded for a protein of 118 amino acids. This was the first time the sequence of any CSF had been reported. Within two years (1984-1986) genes for all four CSFs from the mouse and man had been cloned by several laboratories around the world and the rest, as they say, is history.

Amino-terminal sequence of mouse GM-CSF as determined on the gas-phase sequencer. A total of 31 out of 34 cycles could be assigned with certainty. The exceptions were the first residue which yielded phenylthiohydantoin derivatives of Ile, Val and Ser and residues 24 and 32 (denoted ?) where no assignments could be made.

The availability of cDNA clones meant that researchers could now produce these proteins in quantity by recombinant expression in bacterial systems allowing their diverse biological properties to be studied in detail. As Don Metcalf remarked in his interview with Max Blythe:

Now we did literally have in our hands enough material to inject into a large number of mice to ask the question after 20 years: does this stuff really work in an animal? Does the peripheral blood and other populations now look the way you hope? The answer was yes, they do ‘ and the moment that answer came through in 1986, it was all over. I clearly remember, after getting a positive in mice saying, ‘Okay, there is going to be a human with a disease where CSFs will be used’. It was evident that patients would be found whose white blood cell production could be stimulated by CSFs and the function of their white cells increased, improving their resistance to infections. And that is the way it has turned out.

Three CSFs (G-CSF, GM-CSF and M-CSF) are in clinical use and have been used on millions of patients with low white cell blood counts since 1991. These include cancer patients on chemotherapy as well as patients undergoing bone marrow transplantation. In addition G-CSF and GM-CSF are accepted therapies for AIDS-associated neutropenia, drug-induced neutropenia, and myelodysplastic syndromes (MDS) complicated with infection. M-CSF is clinically used in the treatment of infection, malignancies and atherosclerosis and facilitates hematopoietic recovery after bone marrow transplantation. GM-CSF is also being studied as a treatment for Crohn’s disease.

By the end of 2004 the world market for CSFs was valued at US$3.6 billion, a growth of 11% over 2003. The market had been growing at an average annual rate of 16% since 1999, and in 2008 was in excess of US$4 billion. The market is dominated by Amgen’s Neupogen (filgrastim, recombinant G-CSF). Other products include Amgen’s Neulasta (PEG-filgrastim) a once-per-cycle long acting pegylated product and Leukine (sargramostim, recombinant GM-CSF). Leukine was marketed by Immunex Corp. until 2002 when Amgen Inc. acquired Immunex and, in order to satisfy anti-trust issues, sold its Leukine business to the Berlin-based Schering AG Germany. 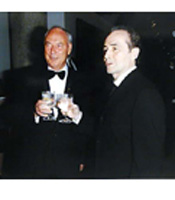 Don Metcalfe and JosÃ© Carreras during Carreras’s visit to Melbourne in 1997. [Courtesy of WEHI]