CSIRO will play a lead role in the next stage of the development of the world’s largest radio telescope, the Square Kilometre Array (SKA), to be located in Australia and in Africa.

This follows the SKA Organisation (SKAO) announcement that it has allocated R&D ‘work packages’ to consortia from around the world. The consortia, involving science institutes and industry, will progress the design and validation processes of the SKA to a stage that will enable tendering and build of the telescope from 2017.

CSIRO will head up the largest of these consortia, the SKA Dish Array Consortium, and will be responsible for the design work relating to the SKA’s 2500 antenna dishes and receivers, and the development of innovative receivers known as phased array feeds (or PAFs).

“We can make a real contribution to one of this century’s most exciting scientific projects.”

In addition, CSIRO will lead the Infrastructure Australia Consortium in charge of designing and costing critical SKA infrastructure at the Australian SKA site (the Murchison Radio-astronomy Observatory in Western Australia). This would include the provision of power, communications, buildings, water and access to the site.

“CSIRO’s considerable expertise in the field of radio astronomy means we can make a real contribution to one of this century’s most exciting scientific projects.”

Dr Ball also highlighted the benefits of CSIRO’s innovative PAF technology which is currently being developed for use with its Australian SKA Pathfinder (ASKAP) telescope, as well as for use with the future SKA.

“PAFs give astronomers the opportunity to view a large part of the sky all at once and can transform sky survey speeds by more than a factor of twenty when compared to traditional receiver technologies,” he said.

“This ground-breaking technology will truly revolutionize the field of radio astronomy.”

CSIRO will also be a key partner in the Assembly Integration and Verification Consortium, which includes the integration of CSIRO’s ASKAP and the South African MeerKAT precursor telescopes, into Phase 1 of the SKA telescope rollout.

As well, the organisation will be involved in several other SKA consortia including those designing the telescope control system and the telescope’s signal processing and data transport functions. It will receive A$9m in funding from the Australian Federal Government in support of its SKA R&D activity.

When complete, it is expected that the SKA telescope will be able to operate thousands of times faster than the best present day instruments. It will allow research into giant gas clouds, black holes, magnetic fields, as well as distant galaxies, and will address a wide range of fundamental questions in physics, astrophysics, cosmology and astrobiology. 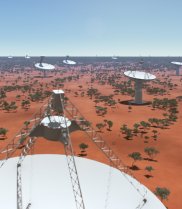 Artist’s impression of dishes that will make up the SKA radio telescope at the Australian core site. (Image: Swinburne Astronomy Productions/Australian SKA Office)