In recognition of the challenge of global warming and the almost inevitable rise in oil prices that would follow diminishing oil supplies, CSIRO embarked on developing low-emission, fuel-efficient vehicles in 1997. In collaboration with over 100 companies and a project spread across six CSIRO divisions, two show cars were produced in 2000: the aXcessAustralia LEV and the Holden ECOmmodore.

Both cars were well received and shown throughout Australia and internationally. The aXcessAustralia LEV was shown to most major car companies throughout the world outside the USA and the Holden ECOmmodore was used as the lead car for the Olympic Torch Relay.

The Low Emission Vehicle Car project was honoured with the DeBono inaugural award for innovation in 1998 and the CSIRO Chairman’s Medal in 2000. The Holden ECOmmodore was the centrepiece of Sydney’s Power House Museum’s environmental display between 2001 and 2009.

In the mid 1990s CSIRO recognised that oil demand was rising faster than oil supply. This would cause sharp increases in the price of oil and fuel security could have a major effect on world economies. In addition, it was recognised that it would take decades to turn over the world’s vehicle fleet in response to the need to reduce global CO2 emissions. For all of these reasons, there would be an increasing demand for fuel efficient cars with much lower emissions than was available at the time. In response to these issues CSIRO decided to initiate a research program into efficient transport and particularly hybrid vehicles.

The vehicle is called a hybrid vehicle because it has two power sources and is hence a hybrid between two vehicle types; the primary source is a conventional, internal-combustion engine and the secondary source is an electric motor. The electrical energy is stored in batteries and/or supercapacitors, which are charged from a generator attached to the engine and optionally from mains electricity.

CSIRO collaborated with Holden Australia and their suppliers to produce the ECOmmodore and with Axcess Australia, a not-for-profit management company, to produce the aXcessAustralia LEV. Both were show cars that demonstrated the companies’ technology as well as CSIRO’s Hybrid Car Technology.

In a series hybrid all the energy from the engine is converted into electrical energy by the generator and then back into mechanical energy by the motor and hence there is no need for a transmission in the vehicle. In a parallel hybrid the engine is connected to the transmission and onto the wheels, as in a conventional vehicle, and the electrical motor can supplement the power from the engine. 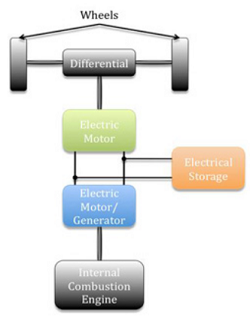 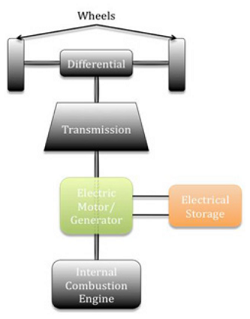 Batteries were developed that had a longer lifetime under high loads than conventional batteries along with battery management software that maintained the ideal state of charge.

Subsequent further development of these batteries in combination with supercapacitors has led to the UltraBattery®, which is under commercialisation in Australia by Ecoult and others.

Supercapacitors store electrical energy in the form of an electric field, unlike a battery that uses chemical bonds. They have the advantage of an effectively infinite life, very fast charging and discharging, low losses, and it is also easy to keep track of the state of charge. They don’t store as much energy for a given size as a battery but are ideal for fast acceleration and deceleration (regenerative braking) of a vehicle.

CSIRO Supercapacitors are under commercialisation by CAP-XX . 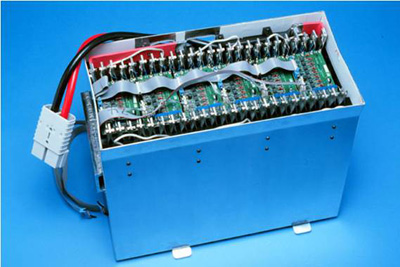 The Switched Reluctance (SR) motor is ideal for vehicle traction because it is the lowest cost solution and the most reliable solution. SR motors are not widely used because the motors are difficult to design and as a consequence few groups round the world can complete a design successfully. CSIRO developed extensive computer modelling to enable the design of ‘world best’ motors.

There are a number of products in production using CSIRO designed motors. One example is the GE Modular Downhole Tractor motor . 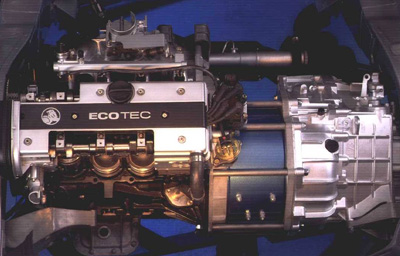 Cutaway model of Holden ECOmmodore drive-train showing CSIRO motor/generator, in a blue casing, between the engine and the transmission. [Source: Holden Australia]

Permanent Magnet (PM) generators are the most efficient generators and with careful design can be cost effective despite using magnets that are expensive relative to other materials found in an electric motor or generator.

CSIRO has commercialised a number of generators including The Westwind 20 kW Wind Turbine . 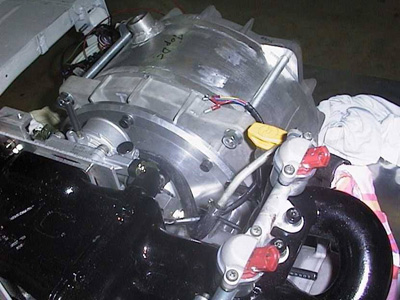 Water-cooled, PM generator coupled to engine as used in aXcessAustralia LEV (photographed just prior to installation in the vehicle). [Source: aXcessAustralia]

The reason a hybrid vehicle saves fuel is twofold:

2. It allows a smaller engine; hence lower parasitic losses (mainly friction), to be fitted to the vehicle since the peak power, which would otherwise size the engine, can be supplemented by the electrical system.

Choosing when to run the engine and how much energy to put into storage and which type of storage to use, battery or capacitor, is the role of the energy management system. 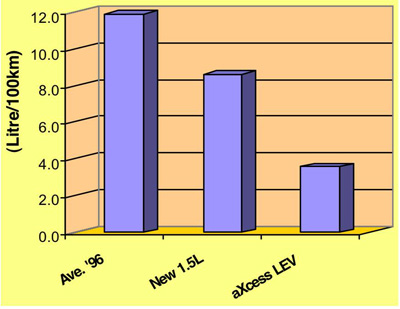 The Holden ECOmmodore was used as one of the lead cars for the Olympic torch relay and for various motor shows including Sydney and Detroit. Until 2009 the car was the centrepiece of the environmental exhibit at the Power House museum in Sydney. The parallel hybrid drive train was provided by CSIRO. 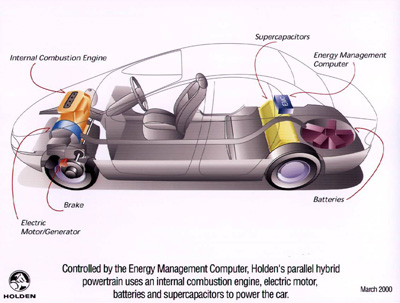 The aXcessAustralia consortium of companies wanted to showcase their products to the world. They came up with the concept of a Hybrid vehicle that would attract attention due to its novel drive train and this in turn would provide the opportunity to sell their products. The aXcessAustralia LEV car was shown throughout the world including visits to most major manufactures throughout the world. The novel series hybrid drive train was provided by CSIRO. 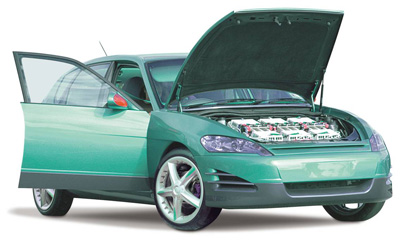 The importance of the work was recognised by the Power House Museum in Sydney who used the ECOmmodore as the centrepiece of their environmental exhibit for many years and by CSIRO with the awarding of CSIRO’s highest award, the Chairman’s Medal for the year 2000.

Holden ECOmmodore awaiting the arrival of The Olympic Flame before the start of the final leg of the Torch Relay from Uluru to Sydney for the 2000 Olympic Games. [Source: Holden Australia]