The cause of the catastrophic declines and disappearances of amphibians worldwide, that began in the late 1970s, was a mystery for many years. Many researchers believed the problem must be an environmental change. The declines were sudden and occurred in remote wilderness areas.

An Australian team involving CSIRO, James Cook University, and the Queensland Department of Environment discovered that the cause was an introduced pathogen, an unusual and novel chytridiomycete fungus, that was spreading across Australia, causing massive die-offs which had been occurring unnoticed.

The finding of an infectious cause presented a paradigm shift in beliefs on amphibian decline and was the first step in attempts worldwide to save frog species from extinction. International work has since shown the fungus is still spreading across the globe and has caused the decline and extinction of hundreds of frog species. Further research has been aimed at controlling the disease, although much remains to be done before effective management will be achieved.

Australia led the world on this discovery as it was unique in its collaborative, multidisciplinary approach between ecologists and disease experts. In recognition of her contributions to this field Lee Berger was awarded the Ian Clunies Ross Memorial Award for Australian veterinary academic achievement by the Australian College of Veterinary Scientists in 2007 and shared a CSIRO Medal for Research Achievement in 2000.

In the 1980s frog biologists worldwide realised that the declines they had observed in amphibian populations were not natural fluctuations ‘ and that species were disappearing forever. The worst declines occurred in rainforests and alpine areas of Australia, Latin America and the USA. Research was initiated to monitor the populations and look at environmental causes, but no conclusive evidence could be found supporting pollution, increased UV-light, climate change or habitat destruction as a cause.

However, an Australian team led by Rick Speare, pathologist and epidemiologist at James Cook University, postulated that an introduced disease must be the cause. They realised that the sudden declines indicated that mass mortality of adults was occurring and recognised that the declines had spread progressively north from southeast Queensland up the Queensland coast, consistent with an epidemic. This theory was extremely unpopular ‘ everyone knew frogs were the canary in the goldmine

Keith McDonald, Chief Ranger at the Queensland Department of Environment and Heritage and a renowned frog biologist had been monitoring frog populations throughout his career. He had followed the disappearance of Queensland frog populations in mountains in the south east in the 1970s and then on the central coast in the 1980s. When declines began in north Queensland sites in the 1990s, he knew it was a crisis. In 1993 only one upland population of frogs remained unaffected in the Wet Tropics on Big Tableland near Cooktown ‘ the last known habitat of the sharp snouted day frog (Taudactylus acutirostris) which Keith predicted would soon be hit. He began regular monitoring visits and asked Rick Speare to help investigate the role of disease in the disappearance of upland frogs in Queensland. Rick Speare, at that time employed in public health, had experience investigating disease for biocontrol in the cane toad. 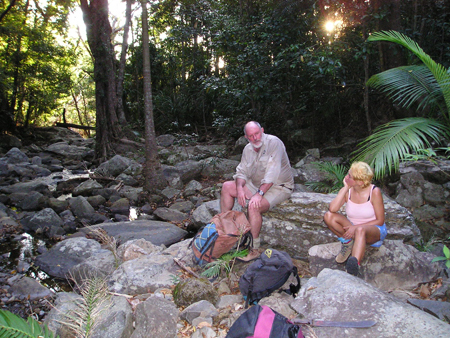 Soon after Rick joined Keith in monitoring the frogs on Big Tableland, mass mortality occurred. Adults along the study site were found ill or dead. A group of T. acutirostris were collected to be maintained in captivity at three sites: James Cook University, Melbourne Zoo, and Taronga Zoo. Within 3 months of this initial episode all adults of T. acutirostris were gone from O’Keefe Creek above 400 m altitude. Tadpoles of some species survived, but no establishment by metamorphs was detected. All captive animals also died and T. acutirostris is now extinct.

Although this was a disaster for the frog populations, it provided a scientific opportunity since it was the first time ill and non-autolysed dead frogs were available for pathological examination in Australia. Rick ruled out bacterial septicaemia as a cause which had been postulated in the US. However, the pathology was unspectacular and indicative of a toxic or peracute viral cause. Viral isolations were unsuccessful. Undescribed organisms, that appeared like protozoa, were noted occasionally in the skin of the Big Tableland frogs and more commonly in the T. acutirostris that had died in captivity at James Cook University. At this stage, however, Rick dismissed them as being minor parasites, probably unrelated to the deaths in the wild. The early report concluded that the frogs had not died of bacterial septicaemia, and an unknown virus or toxin may be the cause. Not the penetrating insights wanted! 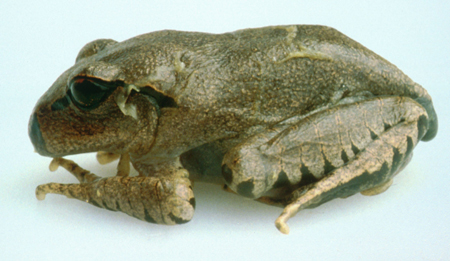 Rick and the Queensland Frog Recovery team decided a full time veterinary pathologist was needed to continue investigations into the cause of death of these frogs. A PhD stipend was obtained for Lee Berger, a veterinarian with an interest in wildlife, to begin work in 1995 at the CSIRO Australian Animal Health Laboratory, Geelong (AAHL) to study disease in Australian frogs under the supervision of Rick Speare and Alex Hyatt, a senior CSIRO scientist. Alex was conducting experimental work on viruses for cane toad biocontrol, and had established amphibian facilities and disease methods at AAHL.

As little was known about diseases in any Australian frogs, the group decided to survey disease in both declining and non-declining populations. A multidisciplinary network was set up involving herpetologists in universities and government departments. Sick frogs were collected from all over Australia and forwarded to Lee at AAHL for pathology and other diagnostic tests.

The culprit identified ‘ a new species of fungi not a virus

While searching in vain for the mythical virus in the Cooktown frogs by detailed electron microscopy, the disease survey revealed heavy infections of the undescribed skin parasites in winter die-offs of common green tree frogs during 1996. Lee Berger suspected this superficial parasite could be pathogenic. In her initial study her first attempt to transmit the pathogen between groups of frogs using pieces of infected skin worked, healthy frogs became infected and the fatal disease was reproduced, demonstrating that this unusual, superficial skin infection was fatal. 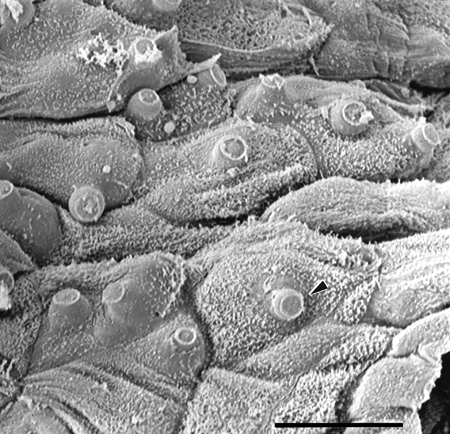 But why had it never been reported elsewhere ‘ was it restricted to Australia or had frog pathology been so neglected? Soon after this experiment was completed, the parasite was found during declines in Panama. As Lee recalled:

It was exciting to watch as a fax with photos of the organism came through from David Green (US frog pathologist) proving this disease was a worldwide problem.

Louise Goggin (CSIRO Marine Research) employed DNA sequencing of nuclear gene encoding small-subunit ribosomal RNA to show that the amphibian parasite ssu-rDNA groups were among those of the chytrid fungi, placing the organism most closely to Chytridium sp. From the ultrastructure of the zoospore Peter Daszak (Kingston University, UK) also identified it as a new species in a new genus of chytrid fungi. This was an unexpected finding ‘ members of this phylum had not been found previously to cause disease in vertebrates, explaining why this pathogen did not appear in any pathology texts! Many other species are primary biodegraders or infect plants and insects.

Further work by Lee and colleagues on this pathogen tackled a broad range of questions relating to the chytrid’s lifecycle, distribution, pathogenesis, diagnosis, treatment, and disinfection. For example they mapped its occurrence down the east coast of Australia and showed mortality increases in winter. Lee then demonstrated experimentally that high temperatures reduce mortality in frogs. She determined that tadpoles may carry the disease in their mouthparts and produced polyclonal antibodies that have led to improved diagnosis. Many methods of working with the fungus that are now widely used were devised during her PhD. 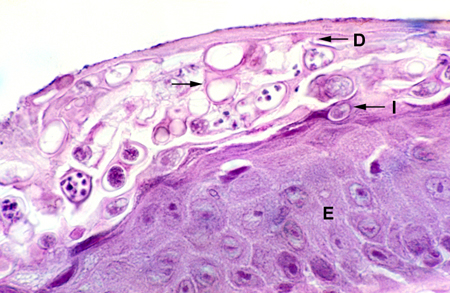 This first evidence for a chytrid as a threatening force worldwide was published in collaboration with the US researchers working in Panama (Berger L, Speare R, Daszak P, Green DE et al, 1998, ‘Chytridiomycosis causes amphibian mortality associated with population declines in the rainforests of Australia and Panama’, In: _Proc. National Academy of Sciences, 95: 9031-9036). The paper contained 14 authors from 3 continents and 11 institutions.

Independent of the Australian group the chytrid was identified as a cause of mortality in frogs at the Washington Zoo by a group consisting of pathologists Don Nichols and Alan Pessier, and Joyce Longcore ‘ an expert on chytrids. Don had seen the chytrid in the skin of frogs at the zoo since 1991. Joyce Longcore described the new species Batrachochytrium dendrobatidis.

Identifying the cause of the declines has been just the start of finding a solution. Much research has since been done throughout the world on the epidemiology, pathogenesis, mapping, diagnosis, disinfection and treatment of this new disease. It has been found on every continent where frogs occur, and molecular genetic analyses have shown it is a spreading, pandemic clone.

This fungus does not grow hyphae, but forms round sporangia that release waterborne, infectious zoospores. It grows best below 23 ºC and dies at temperatures above 29 ºC, explaining why lowland frogs have not disappeared, and why die-offs occur in winter. It does not survive desiccation, and is absent from inland arid regions. 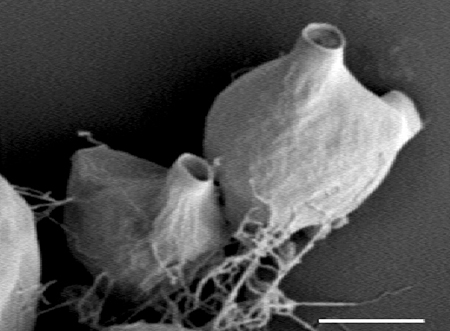 The new disease was named chytridiomycosis. The fungus grows within cells of the outer epidermis. Damage to internal organs is not seen microscopically and death appears to be due to electrolyte loss across the permeable skin.

It has a broad host range, although there is great variation between species in their susceptibility. Some species that crashed are now recovering, suggesting that resistance is evolving. However the abundance and distribution of many species remain severely impacted and further declines are likely. However, research into immunity may provide hope in preventing extinctions.

The CSIRO Australian Animal Health Laboratory has had a key role in development of diagnostic tests ‘ this research has been led by Alex Hyatt. A sensitive real time PCR test that can be used on easily collected swab samples is now in common use. The high quality diagnostic service provided by CSIRO AAHL is used by many researchers and managers, and AAHL has assisted surveys for chytridiomycosis in Europe, Africa, Asia and South and Central America. Methods for cryoarchiving the fungus were also developed at AAHL. The excellent facilities established at AAHL for exotic disease diagnosis in domestic animals have been a huge benefit to frog disease work.

The lifecycle has been studied in detail by Lee Berger and Alex Hyatt using a variety of electron microscopical techniques at AAHL. This has revealed the fungus has many specialised adaptations that allow it to live in the amphibian epidermis.

Even after the Australian team had recognised that an infectious disease was the most likely cause of the declines, there were many hurdles on the way to identification of the agent. The first problem was detecting dead frogs in the forest, which required intensive monitoring as the tiny carcasses are scavenged or decompose rapidly. The second was conducting frog pathology ‘ as so little is known, general surveillance of frog disease was required to improve the knowledge base of normal parasitic flora. Thirdly, identifying and working with a novel chytrid fungus has been difficult.

These problems were overcome by a dedicated team with a collaborative approach, that has been the first step forward in saving frogs from further extinctions.

The Australian Government listed chytridiomycosis as a Key Threatening Process in order to prevent its spread and also abate its current impact on threatened species of frogs, and the World Organisation for Animal Health (OIE) listed chytridiomycosis as a notifiable disease in 2008 in order to prevent its spread. This work will ultimately lead to better conservation of amphibians in particular and better conservation of wildlife in the long-term due to this research which demonstrates the risk of introducing virulent pathogens into naÃ¯ve host populations, as well as the need for background surveillance and improved knowledge of wildlife disease.