I plan to recycle these manuals shortly.

Many CDC manuals are available at bitsavers, but there are not many relevant to the Cyber 76, and the above are often later versions.

CDC did a thorough job with its manuals.  Each revision of the underlying product came with a set of updated pages for the manuals (starting with a pink page), minor changes to the pages were marked in the margin so you could quickly scan for changes relevant to your work.  The reasons for the change were detailed, and each page carried a revision letter.  Here are some samples showing an early cover page, a list of effective pages, a revision packet, a revision record, and a later smaller-format manual. 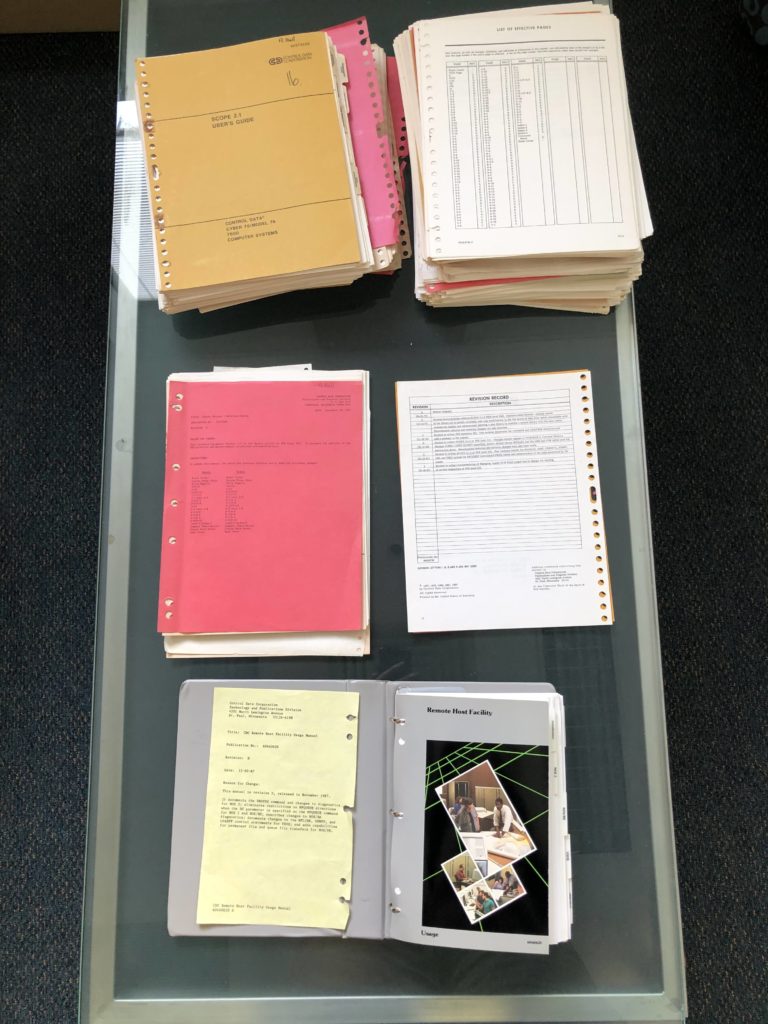 Appendix 7, picture 7 shows a manual in a typical three-ringed folder, held together with Chicago bolts (of various sizes).  I’ve uploaded one manual as a sample here – it is the manual for the Update source code manager.

The Cyber 76 ran the SCOPE 2 operating system – not to be confused with the early SCOPE OS on the 3000 series machines, or the later SCOPE 3 variants on the lower Cybers.  SCOPE stood for Supervisory Control Of Program Execution.

SCOPE 2 had a number of advantages – it had a universal record structure (W-records) for all on-line files, unlike the confusing variety of records structures on other Cybers, often derived from magnetic tape formats.  Dave Micklethwaite who worked for both CDC and Cray Research (as did many) told me once that SCOPE 2 was written, and then the company left it alone: which was an advantage.  There were additions in later stages, such as the Cyber Control Language (CCL), which was common to all the Cybers, and greatly enhanced the flexibility in job directives.  Here’s a sample use of CCL.

The genius of the CSIRO implementation of SCOPE 2 on the Cyber 76 was the grafting on of an interactive system.  DCR abandoned the idea of acquiring lower Cybers as front-ends, and instead doubled the size of the Large Core Memory (LCM).  DCR tricked SCOPE into thinking it had two permanently-mounted tape drives, one for reading and one for writing, and the network was attached to these.  An interactive system was built, principally around the Ed editor, but also allowing job submission and interrogation, routing of output and management of data.  Given the limitations on the number of files that the permanent file system could handle with a flat file system, DCR expanded the role of partitions in binary libraries to hold arbitrary text, with Ed libraries being one of the unexpected treasures with the ability to add arbitrary text metadata to data.  Over 100 interactive users could be happily supported with minimal delays to responses.  Henry Hudson was largely responsible for this suite – a triumph which he unfortunately did not live to see to its climax, suffering a fatal heart attack at his desk.

Update grew out of earlier products such as COSY (COmpressed SYmbol) on the 3000 series.

Update provided a means to store source code, and then add to it or modify, while keeping a record of all changes.  It reflected the usual input medium of its time, punched cards, but allowed the user to divorce from actual punched cards.  Here is an extract from an initial run of Update, to create a library of “decks” and “comdecks”. (This was a program called VAUD, based on an earlier one called AUD written for the Cyber 76 by Mike Dallwitz, to provide a useful audit of files on the Cyber 205 under VSOS.)

….
*DECK AUD
Program Aud
1   (audin,unit5=audin, output,unit6=output,unit10=output)
C
C     This program produces a sorted audit listing of a user’s
C     VSOS permanent files in a neat format.
C
*call param
*call comdat
*call comfmt
*call comhd
….
Update saved the code in a library, with each line identified with a deckname and number, which could be subsequently addressed.  It also emitted a compile file containing the current version of the code, ready for passing to the compiler.

Here’s an extract from the first modification run:

Lines introduced by an ident were labelled with the ident and a number, for subsequent reference, and an updated library could be saved.  The basic directives were *ident, *delete, *insert and *before which could be abbreviated.  You can see version control with the directive *DEFINE CYB205 .

(When a new version of the OS or products was released by CDC, it provided an update library with the latest version.  On site, DCR could temporarily rescind later ‘mods’, and then apply them selectively while checking for compatibility with local modifications.)

Here’s an extract from the last modification run, with a telling message.

Fortran 200 was the Fortran compiler for the Cyber 205 under VSOS, documented in the manual CDC_Fortran_200_Version_1_Reference_Manual_60480200. 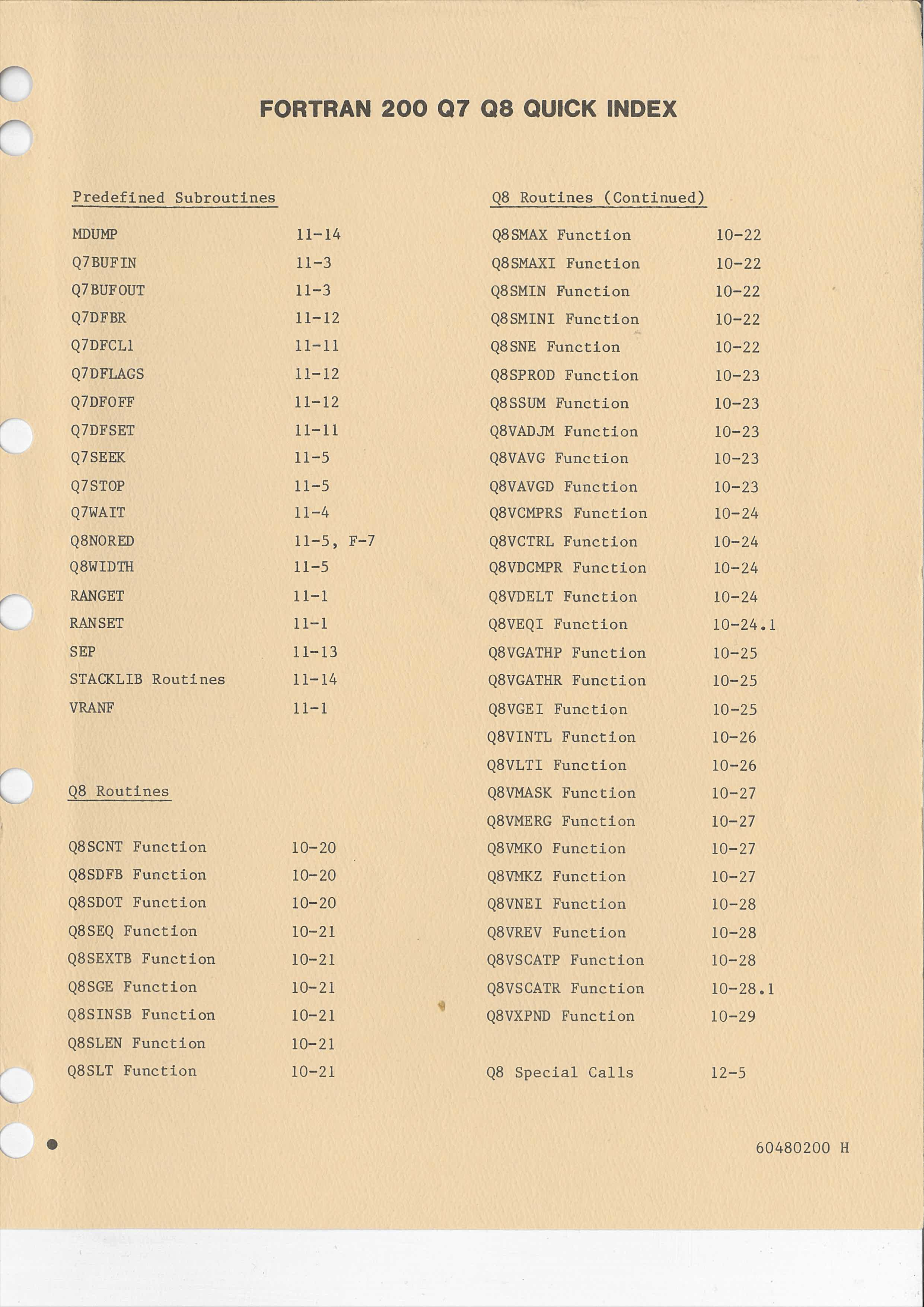 For example, when the UK Met Office acquired its Cyber 205, the compiler did not support half (32-bit) floating point format, which the Met Office wanted to use to conserve memory and increase performance.  Clive Temperton coded Fast Fourier Transform routines in half precision, with most of the code consisting of Q8 calls.  Here is a sample, with the vector instructions having a V as the last letter in the Q8 calls.

I have on microfiche a set of Cray Research UNICOS manuals from the early 1990s.

I gave a talk to a CSIRO IMT Webinar entitled Why Cray? on 30 June 2022, to mark the arrival of the Cray EX system setonix at the Pawsey Supercomputing Centre.