Dr Tickner currently heads the CSIRO Security Technologies stream, supervising the efforts of more than a dozen scientists and engineers to develop world-first scanning equipment for border security. He is also a senior researcher within the Process Technologies stream, where his work broadly encompasses inventing, designing and building novel nuclear instruments to solve a diverse range of challenging measurement problems in the minerals industries. He relies on a wide range of nuclear expertise, including advanced radiation transport theory, Monte Carlo modelling, a strong experimental background, and familiarity with custom-designed readout electronics, digital data processing and software design.

Dr Tickner has received the following awards for his work:

2008: John Philip Award for the Promotion of Excellence in Young Scientists

2006: CSIRO Medal for Research Achievement for Air Cargo Scanner (with 13 others)

2004: CSIRO Minerals Innovation Award for development of a prototype fast-neutron and gamma-ray radiography scanner for air cargo (with 9 others)

Since December 2006 he has been an editor of the International Journal of Applied Radiation and Isotopes. 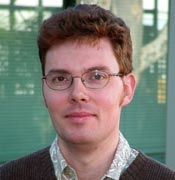 James Tickner is a Senior Research Scientist at CSIRO Minerals.