Existing bulk scanning technologies use high-energy X-rays to detect distinctive metal objects such as weapons, but ill-defined, organic materials such as drugs and explosives, are harder for them to detect. CSIRO’s world-first technology combines neutrons and gamma-rays to detect and predict the composition as well as the shape and density of an object. This helps operators more readily identify suspicious materials.

The technology is easily integrated with existing airport systems and is non-intrusive to minimise the impact of security measures on rapid freight movement. Pallets and unit load devices can be scanned without being unpacked, allowing high volumes of cargo to be rapidly screened.

Following initial feasibility studies and demonstration of a prototype scanner, the Australian Government allocated A$8.4 million in 2004 to the Australian Customs Service to construct a commercial-scale facility at Brisbane International Airport to trial the first commercial prototype CSIRO Air Cargo Scanner. The Brisbane Mark 1 trial commenced in June 2006 and ended in March 2007. It demonstrated good detection rates for a wide range of threat items, with the prototype performing as well as the leading technology on the market.

In early 2008 CSIRO launched a venture with Chinese company Nuctech to develop the next generation of scanner incorporating CSIRO’s world-first neutron technology and Nuctech’s X-ray systems.

The team behind the scanner won a CSIRO Medal for Research Achievement in 2006, and were finalists in the 2008 Australian Museum Eureka Prize for Science in Support of Defence or National Security.

Security and border protection are key priorities for many countries around the world.

There is a growing need for improved screening of air cargo. Unlike the fairly rigorous screening procedures to which passengers and their luggage are subjected, the vast majority of air freight is not scanned either before boarding an aircraft, or after its arrival at the destination country. Potential scanning technologies need to be sensitive to a wide range of threats including explosive devices and materials, weapons, nuclear materials, narcotics and other contraband items. A useful system must be capable of rapidly scanning large numbers of air cargo containers without unpacking.

Detecting a wide range of threats in large, consolidated cargos requires a highly-penetrating imaging system. Conventional high energy X-ray radiography is well suited to detecting items with distinctive shapes such as weapons. However finding small quantities of organic materials with ill-defined outlines such as narcotics or explosives is much more difficult.

The absence of an effective scanning technology for bulk air cargo is particularly pressing and there is a growing need to implement mass-screening of imports and exports. The volume of air cargo passing through Australian airports precludes inspection methods that require the cargo to be deconsolidated into individual packages.

Industry needs for scanning systems include:

CSIRO Minerals has an international reputation for developing novel, on-line analysis instrumentation for the minerals and energy industries. The Australian Customs Service approached CSIRO in December 2001 to discuss the possibility of developing novel approaches to improve air cargo screening. Following this meeting, CSIRO developed a new scanning technique and conducted initial feasibility studies. Following the laboratory demonstration of the technique, the Australian Government allocated A$8.4 million in 2004 to Customs to construct and trial the first prototype CSIRO Air Cargo Scanner in a facility at Brisbane International Airport. The Brisbane trial commenced in early 2006 and ended in March 2007. It demonstrated good detection rates for a wide range of threat items, with the prototype performing as well as the leading X-ray technology on the market, despite having significantly lower spatial resolution and without the multi-view capabilities of one of the X-ray systems. The project has been supported throughout by Australian Customs Service and the Department of Prime Minister and Cabinet. 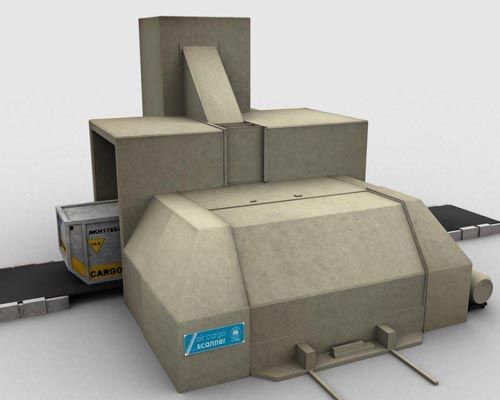 The CSIRO Air Cargo Scanner that was installed and tested in an Australian Customs facility at Brisbane International Airport. [Source: CSIRO]

The new scanning technique combines high-energy neutrons with X-rays or gamma-rays to produce images that show not just the shapes but also the composition of cargo items. The CSIRO scanner collects two separate radiographic images, one using X-rays or gamma-rays and one using fast, high-energy neutrons. In contrast to X-rays which are stopped by dense materials such as metals, neutrons are most readily blocked by organic materials and substances with high hydrogen content. This means that by combining the X-ray and neutron images it is possible to construct a composite image that shows items coloured according to their composition. A broad range of material classes can be distinguished, including nuclear materials such as uranium and plutonium, iron and steel, aluminium, glasses and ceramics, explosives, foodstuffs, narcotics and plastics.

Key aspects of the research include:

Key advantages of the combined neutron and gamma-ray scanning method include:

The technology is easily integrated with existing airport systems and is non-intrusive to minimise the impact of security measures on rapid freight movement. Pallets and unit load devices (ULDs) can be scanned without being unpacked, allowing high volumes of cargo to be rapidly screened. 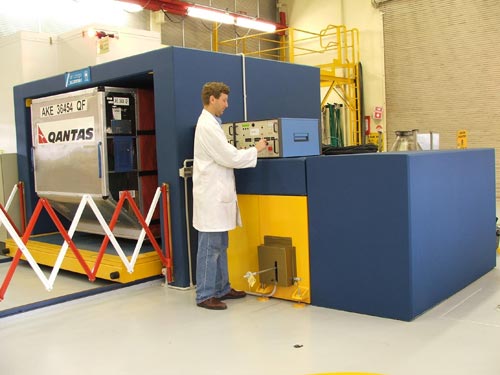 The limitations of X-ray systems for the detection of explosives and drugs in cargo have stimulated a hunt for alternative methods for cargo inspection, including those based on neutrons. Fast neutron techniques are attractive for these applications as neutrons have the required penetration, interact with matter in a manner complementary to X-rays and can be used to determine elemental composition. Numerous groups around the world have attempted to develop neutron-based methods for cargo screening. However the application of neutron techniques to the detection of contraband and explosives in cargo has not lived up to its early promise, primarily because of low detection sensitivity and/or high false positive rates, slow scan speeds, equipment complexity and high cost.

CSIRO Minerals has overcome the limitations of these earlier neutron techniques by developing a world-first scanner for interrogating air cargo for contraband such as drugs and explosives. Over the course of about six years, the team has taken the original concept (invented and patented by Drs Brian Sowerby and James Tickner) and turned it into a full-scale operating scanner at Brisbane International Airport and commercialised it in partnership with a world-leading supplier of X-ray cargo scanners. The CSIRO Air Cargo Scanner is the first practical system that meets the needs of the airline industry.

The concept invented by CSIRO combines fast-neutron and gamma-ray or X-ray radiography to provide high-resolution images of cargo. Unlike existing X-ray systems, the images collected by our scanner provide additional information about the composition of materials inside the cargo. The presence of this composition information greatly facilitates the task of image analysis and is particularly advantageous in the detection of organic materials with ill-defined shapes such as concealed narcotics and explosives.

Key areas of innovation in developing the scanner from an initial concept to a full-scale commercial prototype scanner suitable for routine operation include: 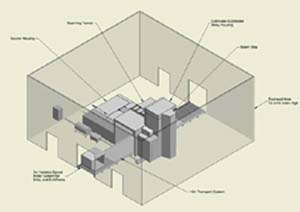 Sketch of CSIRO Air Cargo Scanner that was installed and tested in an Australian Customs facility at Brisbane International Airport. [Source: CSIRO]

CSIRO has recently launched a new venture to commercialise the next generation in air cargo scanning technology with an international security-inspection-system specialist Nuctech Company Ltd. The joint venture will see the two partners working together to develop a new scanner incorporating CSIRO’s world-first neutron technology and Nuctech’s proven X-ray systems. This new venture aims to develop a product with:

The innovation involved in developing the Air Cargo Scanner has been recognised by the following awards: