Ming-Bo Wang was born on 25 March 1962 in Ji An, a small county in northeast China. His father was a primary school teacher. His mother was also a primary school teacher before his older sister was born. He has four more siblings including a younger brother and three younger sisters. Ming-Bo attended primary and middle schools during the later years of China’s Cultural Revolution. Fortunately, during his three senior school years, between 1977 and 1980, China resumed normal education and Ming-Bo was able to receive the best possible education in the county of about 200 000 people. As a result he received the top score in the university entrance examination and was admitted into the prestigious Beijing (Peking) University in 1980, where he studied chemistry for four years. In 1984, he became a Masters student in the Chinese Academy of Sciences where he continued to be trained in chemistry.

Ming-Bo first entered biological research in 1987 when he became a junior researcher in the Biotechnology Research Centre of the Chinese Academy of Agricultural Sciences. He worked under Dr Yunliu Fan for three years to study insect resistance genes. In 1990, he was awarded a Rockefeller Foundation Fellowship and moved to the University of Durham in UK to study for his PhD under Professor Donald Boulter and Dr John Gatehouse. In Durham he worked on the isolation and functional analysis of gene promoters and developed further skills in plant molecular biology.

After completing his PhD in 1994, Ming-Bo was offered a postdoctoral position by the Cooperative Research Centre for Plant Sciences jointly run by CSIRO and The Australian National University. Encouraged by his PhD supervisors in Durham and Dr Liz Dennis of CSIRO Plant Industry, Ming-Bo accepted the position and in September 1994, moved to Canberra with his wife and first son to join Peter Waterhouse‘s laboratory in CSIRO Plant Industry.

In the first few years he worked on a project aimed at developing virus-resistant barley varieties, which was part of the CRC for Plant Sciences’ Barley Improvement Program run by Dr Jake Jacobsen. It was during this period that Ming-Bo developed expertise in pathogen-derived virus resistance and cereal transformation which enabled him to carry out some of the experiments such as rice transformation demonstrating that hairpin RNA-induced gene silencing in plants.

In 1998, Ming-Bo officially joined CSIRO after the CRC centre closed, and continued to work with Dr Waterhouse on gene silencing and virus resistance in plants.

Besides Dr Waterhouse, Ming-Bo also worked closely with Drs Richard Brettell and Mick Graham in the first few years after he arrived in Canberra, and with Drs Liz Dennis and Jim Peacock in recent years. Many other colleagues, such as Drs Jean Finnegan and Narayana Upadhyaya, Ms Limin Wu, Ms Kerrie Ramm, Mr Geoff Ellacott and Mr Neil Smith, have helped with or directly contributed to Ming-Bo’s research work in recent years.

By 2009, Ming-Bo was a Principal Research Scientist in CSIRO Plant Industry running a group studying the function of RNA silencing and small RNAs in disease resistance in plants. 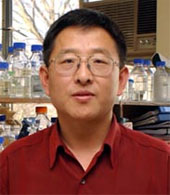