John Watt started work with the Australian Atomic Energy Commission (AAEC) as a Research Officer after graduating from The University of Sydney in 1956 with a Master of Science. He worked in the AAEC Isotope Division, becoming Head of the Radioisotope Applications Research Section in 1967.

In 1982, he was transferred to the CSIRO Division of Mineral Physics as a Chief Research Scientist and Officer-in-Charge of the Division’s Lucas Heights and Port Melbourne sites. He was appointed an Assistant Chief of the CSIRO Division of Mineral and Process Engineering in 1985, and returned to full-time research work as a CSIRO Fellow in 1995. He retired from CSIRO in 1997.

John’s research has covered a whole range of on-line analysis applications in the minerals, coal and oil industries. He pioneered this research in Australia, developing a balance between laboratory research and field trials. He also undertook the first major commercialisation of on-line mineral slurry analysis systems in the early 1970s, which led to the setting up of the on-line analysis manufacturing industry in Australia.

He is a Fellow of the Australian Academy of Technological Sciences and Engineering (elected 1977) and was editor of the international research journal Nuclear Geophysics. 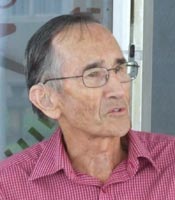