CSIRO scientists developed an injectable recombinant sub-unit vaccine for infectious bursal disease virus (IBDV) which attacks the immune system of young chickens, causing illness and death. This vaccine was one of the first genetically engineered vaccines for veterinary applications. The control of IBDV was identified as a priority by the poultry industry world-wide.

The project to develop the vaccine was carried out from 1982 to 1992, and was led by Ahmed Azad, Colin Ward and Kevin Fahey. The project covered the whole spectrum of vaccine research including: virus purification, protein characterization, monoclonal antibody production, gene cloning and sequencing, fermentation development and animal testing.

In 1997 the IP was licensed to the international pharmaceutical company Merial Ltd and is a key component of the first one-dose poultry hatchery vaccine against IBDV and the herpes virus infection, Marek’s disease. The vaccine, Vaxxitek® HVT+IBD, is a recombinant live turkey herpes virus that also expresses the IBDV host protective antigen. It was released to the market in 2006.

For their efforts, the IBDV team was awarded the 9th Dr Bart Rispens Memorial Award in 1993 for their paper, ‘A recombinant subunit vaccine that protects progeny chickens from infectious bursal disease’ (Avian Pathology, 20: 447-460) and the CSIRO Chairman’s Medal in 1997.

Infectious bursal disease virus (IBDV) is a member of the Birnaviridae family of double stranded RNA (dsRNA) viruses. It causes an immunosuppressive disease in young chickens by damaging the bursa of Fabricius, the source of B-cells in avian species. As this disease increases the susceptibility of poultry to other diseases, control of IBDV is commercially important to the poultry industry world-wide.

In 1982 scientists from CSIRO’s Divisions of Protein Chemistry, Animal Health and Chemical and Wood Technology embarked on a collaborative project to develop a recombinant vaccine against IBDV. At the time little was known about the characteristics of the IBDV particle and nothing was known about the molecular components of the prevalent strain in Australia. The project was supported by two Generic Technology Grants under the National Biotechnology Program from 1985 to 1989 and by direct funding by the Australian company Arthur Webster Pty Ltd, the commercial partner for the period 1986-1990.

Unravelling the composition of the virus

From virus isolation and characterisation through to fermentation development and animal testing, the project covered all aspects of vaccine research. A purification protocol was developed for the virus in 1982 and the nature and size of the viral genome was established ‘ two segments of dsRNA of 3 200 and 2 900 base pairs respectively. By the end of 1983 both segments of dsRNA had been cloned and their complementary DNA (cDNA) sequences completed by 1985.

A critical development was the identification of the viral protein required for use in the recombinant vaccine. Two different monoclonal antibodies were generated and used to monitor the conformational state and immunogenicity of the expressed viral proteins. Deletion mapping of the large genomic segment and assaying expression products with monoclonal antibody showed that the region recognised is contained totally within VP2 not VP3 as previously believed.

Recombinant VP2 alone, when injected into specific pathogen free (SPF) chickens produced virus neutralising and protective antibodies establishing VP2 as the protein required for vaccinating against IBDV. These results along with the sequence data formed the basis of a patent application describing the identity and structure of the host-protective antigen of IBDV. This patent formed the basis of the commercial agreement reached with the international pharmaceutical company Merial Ltd in 1997.

A major effort was mounted on the expression of VP2 for vaccine applications. Both bacterial and yeast systems were investigated but only the yeast-derived product was found to induce protective immune responses.
The project also included fermentation development which gave product yields an order of magnitude greater than that required by the commercial partner. Finally, downstream processing protocols were developed to aid product recovery, product stability and immune enhancement.

The project was extended to characterise the extent of antigenic variation in a new break-through strain that emerged in the USA. Since the virus could not be introduced into Australia, senior technician Paul Failla went to the UK to isolate viral RNA for sequencing studies. The sequence was determined and the cDNA incorporated into the yeast expression system for future vaccine use.

The research phase of the project was successfully completed and the vectors and final reports handed over to Arthur Webster Pty Ltd in 1990, however they were unable to repeat the CSIRO results and appeared to become disillusioned with the new technology. 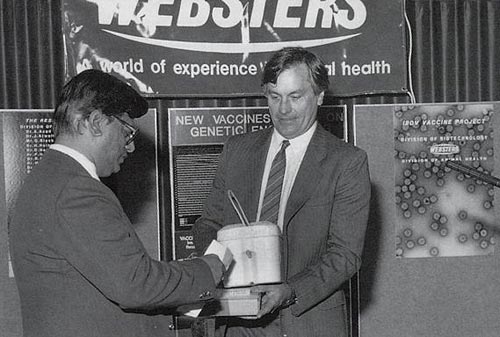 CSIRO’s Ahmed Azad handing the IBDV vaccine vectors to Arthur Webster, the Managing Director of Websters, in 1990. A special function was held at the Parkville laboratories to celebrate the successful completion of the collaborative IBDV vaccine research program. [Source: CSIRO]

At the 1992 annual meeting of the Australian Society for Microbiology, Arthur Webster delivered a paper to the meeting in which he criticised the CSIRO scientists for this failure. While the science had been excellent, CSIRO had failed to understand the company’s requirements. He illustrated this point with a cartoon involving a mother with a baby in a pram returning to the sperm bank to complain, I asked for someone cute, with dark hair and a movie-star appearance

In discussions between Arthur Webster Pty Ltd and CSIRO later that year it became apparent that the company had removed two critical steps in the process. Over the next three years, in collaboration with the CSIRO team, the project was finally successfully developed to fit the company’s requirements.

During this time Arthur Webster Pty Ltd was taken over by the American company Cyanamid. Plans for the registration trials were prepared but before this work could proceed, Cyanamid announced that their new parent company, American Home Products, had decided to withdraw from the poultry vaccine area.

A moratorium on all future poultry research and development was brought down in February 1995 for a period of six months. In August 1995, the decision was reversed and plans were made to continue with the registration trials of the vaccine. That decision was reversed again in November 1995 and steps were initiated to terminate the agreement and to seek a new commercial partner.

The vaccine finally reaches the market

In 1996 CSIRO was approached by Merial Ltd who were interested in licencing the VP2 technology. They succeeded in developing a new combined live virus vaccine against IBD and Marek’s disease called Vaxxitek® HVT+IBD, which was released to the market in 2006.

The Merial vaccine uses a live strain of serotype 3 herpes virus of turkey (HVT) vector to protect against Marek’s Disease. The vector also expresses IBDV recombinant VP2 antigen which induces an immune response to IBDV. Merial’s Vaxxitek® HVT+IBD is the poultry industry’s first one-dose, hatchery vaccination specifically designed to protect against classic, variant or very virulent strains of IBD and is unique in that it:

The intellectual property arising from this research has been documented in two reviews, 28 original papers and four patents. Milestone payments and royalty streams obtained as a result of this research achievement are being re-invested in CSIRO science.

Find out more
Previous post:
RV Investigator to arrive in Hobart tomorrow!
Coming up next:
Plastic on the coasts is ours